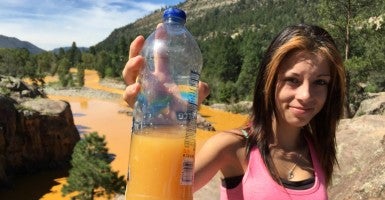 A back-hoe operator accidentally struck an oil pipeline in Alaska in 1994, and 1,000 to 5,000 gallons of oil spilled into the Skagway River. The Environmental Protection Agency had his supervisor—who was at home and off-duty at the time of the accident—criminally prosecuted for negligent discharge under the Clean Water Act.

A second back-hoe operator accidentally struck open the flooded Gold King Mine of Colorado in August 2015, and 3,000,000 gallons of yellow water laced with mercury, lead, and other toxic heavy metals spilled into the Animas River—a regional source of water for drinking and irrigation. The EPA worked to contain the spill, but it held no one accountable.

Guess which back-hoe operator worked for the EPA? The second one, of course.

Prosecutions under the Clean Water Act for so-called “criminal negligence” are not uncommon when directed against private parties, even for seemingly benign discharges of natural elements: “rock, sand, soil [or] stone.”

So EPA Regional Director Shaun McGrath implied that consequences loomed large for the agency when he stood in a local high school auditorium after the Gold King Mine spill and pledged to a public audience that the EPA would “hold [itself] to the same standards that [it] would anyone that would have created this situation.”

Since the Gold King Mine spill, however, EPA officials refused to come clean on responsibility for poisoning the Animas River with the public, the media, and Congress. EPA spokespersons said that conditions in the Animas River were “trending toward pre-event conditions,” and downplayed the long-term consequences.

That was notwithstanding the EPA’s knowledge that “arsenic peaked at 300 times the normal level; lead was 12,000 times higher than normal; mercury and beryllium, respectively, reached nearly 10 times and 33 times the EPA’s acceptable levels.”

EPA officials went so far as to commission an independent analysis of the spill and its cause by the Bureau of Reclamation, producing an 89-page report on virtually every detail of the Gold King Mine—site conditions during the Tertiary Period 35 million years ago, a local history of gold mining…every detail except those related to responsibility for the spill.

Even that publication concluded, however, that the spill “was an excavation induced failure”: EPA employees began excavating the mine after guessing, instead of checking, the actual water levels inside it. That “error” “resulted in development of a plan to open the mine in a manner that appeared to guard against blowout but instead led directly to the failure.”

New Mexico Environment Department Cabinet Secretary Ryan Flynn has said that “from the very beginning, the EPA failed to hold itself accountable in the same way that it would a private business.”

He continued, “the EPA caused an unprecedented disaster that may affect our state for years to come; they must take responsibility.”

Now, New Mexico’s attorney general deserves credit for doing what the federal government would not: “hold [the agency] to the same standards that [it] would anyone that would have created this situation,” as McGrath promised.

The state filed a complaint in federal court against the EPA, Gina McCarthy in her official capacity as EPA administrator, the EPA’s excavation contractor, and several mining companies, requesting “full and just compensation” for the environmental and economic damage caused by the EPA’s spill.

The lawsuit argues that the effects of the EPA’s spill were far worse than reported.

Ultimately, the government should choose: either stop prosecuting private parties for “criminal negligence” or enforce the same laws against senior EPA officials.

Given the EPA’s failure to accept this standard of fairness, New Mexico now seeks accountability in the federal government’s stead.