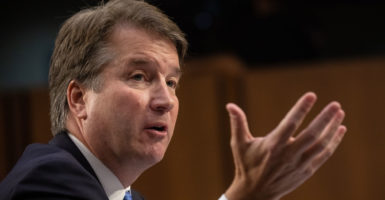 An important issue was raised during the Senate Judiciary Committee hearing for Supreme Court nominee Brett Kavanaugh on Thursday that ought to receive more serious and thorough debate beyond the hearing itself.

During his questioning of the nominee, Sen. Orrin Hatch, R-Utah, discussed the need to correct errors that Congress has introduced into the substantive criminal law; namely, errors that Kavanaugh has seen firsthand as a judge and handled with his trademark care, fairness, and independence.

As Congress “has been chasing an elusive deal on criminal justice reform for quite some time now,” said Hatch, “one particular focus of mine in this area has been ‘mens rea’ reform.”

Although it smacks of legalese, that ancient Latin phrase—which means “guilty mind” and refers to the blameworthy intent behind a criminal act—represents a vital protection against arbitrary government power. But it’s one that, unfortunately, Congress slowly but steadily has eroded over the years.

“Without adequate ‘mens rea’ protections” in the criminal law, Hatch explained, “everyday citizens can be held criminally liable for conduct that no reasonable person would know was wrong.”

There are many examples—stretching from foreign coasts and forests to U.S. national parks and homes and businesses—where people have been prosecuted and, in some regrettable cases, convicted for conduct that reasonable people never would have assumed to be morally blameworthy or a violation of federal criminal laws.

As the Heritage Foundation and the National Association of Criminal Defense Lawyers reported in 2010, many criminal laws that Congress enacts “fail to protect the innocent with adequate ‘mens rea’ requirements,” and “many of them are so vague, far-reaching, and imprecise that few lawyers, much less non-lawyers, could determine what specific conduct they prohibit and punish.”

That is why Hatch has introduced the Mens Rea Reform Act of 2018, which, with respect to any new federal criminal law created by Congress after the Hatch bill is enacted, would require the government to prove beyond a reasonable doubt that a defendant has acted “willfully” unless Congress specifies another standard in the law itself.

Hatch’s bill would also establish a National Criminal Justice Commission to identify existing criminal laws that do not have adequate “mens rea” requirements to protect the innocent, as well as those that Congress thinks “should not” carry such protections “based on specified criteria related to the federal interest in protecting public health and safety, and the potential penalty attached to a violation of the covered offense.”

The bill would task the commission with reporting its recommendations to Congress within three years. Then, Congress would have two more years to act.

The bill would also order federal agencies to clarify, within three years of the commission submitting its report to Congress, what “mens rea” standard attaches to any regulations under their purview that purport to define criminal offenses. “None” would be an unacceptable answer.

Any criminal regulations without a “mens rea” standard lingering after the six-year period would be deemed invalid.

Hatch said Thursday that the bill’s critics pretend it would protect only corporate bigwigs when, in fact, it would “protect the liberty of all defendants in the criminal justice system, the vast majority of whom are not corporations or white-collar defendants.”

Noting that Kavanaugh has written on the issue during his 12 years on the U.S. Court of Appeals for the D.C. Circuit, Hatch asked him, “Why in your view are ‘mens rea’ requirements so important?”

Kavanaugh was quick to answer that “’mens rea’ requirements are important because, Senator, under the due process clause [of the U.S. Constitution] and the precedents of the Supreme Court, it is not right to convict someone based on a fact they did not know. It is just an elemental point of due process.”

Kavanaugh referenced precedent and two of his own opinions to support his claim.

“I’ve seen cases where a mandatory-minimum sentence was elevated from 10 years to 30 years,” he said, “based on a fact that the defendant did not know.”

In United States v. Burwell (2012), dissenting from the majority opinion of the en banc court, Kavanaugh wrote that “’mens rea’ embodies deeply rooted principles of law and justice that the Supreme Court has emphasized time and again.”

United States v. Burwell involved a mandatory 30-year prison sentence for carrying an automatic weapon during the commission of a violent crime, and addressed whether the government had to prove that the defendant knew his weapon could be fired automatically.

In the hearing on Thursday, Kavanaugh recalled that this was “not a sympathetic defendant.” It was an armed bank robber who claimed he was unaware his weapon was automatic. “But I thought it was a complete violation of due process,” Kavanaugh continued, “to give him a 30-year mandatory minimum for a fact that he did not know.”

And his reasoning was perfectly in line with the U.S. Supreme Court’s cases on “mens rea.”

In another case, United States v. Williams (2016), Kavanaugh wrote an opinion concurring with the majority decision to reverse a murder conviction where the jury instructions on “mens rea” were unclear and, as he recalled Thursday, there “was a question of manslaughter versus second-degree murder that would have had a huge difference in the defendant’s sentence.”

United States v. Williams involved a death resulting from a gang initiation ritual and a dispute between the prosecutor and defense counsel over whether or not jurors could consider the victim’s statements made during the ritual, which conveyed consent to the conduct that ultimately caused his death, in deciding whether to convict the defendant of second-degree murder or the lesser offense of manslaughter.

In his opinion, Kavanaugh asked, “Who’s right about the law?” While fully acknowledging that the defendant “committed a heinous crime,” he concluded that jurors had been “armed with [a] misunderstanding” of the law and convicted the defendant of second-degree murder instead of manslaughter.”

“I am unwilling to sweep that under the rug,” wrote Kavanaugh.

It meant a difference between the defendant’s 22-year prison sentence for murder and a maximum sentence of eight years for involuntary manslaughter.

Both cases prove Kavanaugh’s statement Thursday, “No matter who you are in my court, if you have the right argument on the law, I’m going to rule in your favor.”

They also vindicate Hatch’s proposal in the face of unfair criticism.

“'[M]ens rea’ is foundational to due process,” said Kavanaugh, “and I share your concern about ‘mens rea’ reform.”

Hatch has long supported much-needed “mens rea” reform in a Congress that too often ignores fundamental moral distinctions between accidents and crimes.

Former Attorneys General Ed Meese and Michael Mukasey, Supreme Court justices, and many legal scholars, including those at The Heritage Foundation (see here, here, here, and here), have also argued in support of “mens rea” reform.

With Hatch’s proposal pending, let’s hope that other senators were listening in his exchange with Kavanaugh.