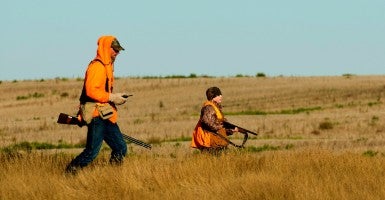 The criminal law should enforce moral codes that everyone instinctively knows, not arcane regulatory objectives that can trap real unwitting individuals. (Photo: istockphoto)

For more than 15 years, John Sturgeon used a hovercraft to reach moose-hunting grounds in Alaska without any incident or objection. Then, one day in 2007, two National Park Service rangers told Sturgeon that he was on federal property and hovercraft were illegal.

What followed was nine years of litigation.

Sturgeon lost his case in the district court and court of appeals. The U.S. Supreme Court gave him a chance for victory—the justices sent his case back to trial. Now, Sturgeon will have the chance to turn the rangers’ rules against them.

In his case, Sturgeon could emphasize the very facts that landed him in a courtroom: the existence of federal criminal regulations no one knows (riding a hovercraft is prohibited) in places where no one lives (Alaskan backcountry).

That is why the facts of Sturgeon’s case justify a mistake of law defense, which advances the idea that no one should be convicted of a crime if no reasonable person would have known that the charged conduct was criminal.

“This is Alaska; this isn’t Yellowstone National Park,” said Sturgeon.

Alaska has unique sovereignty, terrain, and land use issues. Congress divided regulatory authority over 104 million acres of intricately interwoven swaths of federal, native, and private land between Alaska and the federal government under the Alaska National Interest Lands Conservation Act of 1980 (ANILCA). Chief Justice John Roberts agreed with John Sturgeon’s interpretation of that section of that statute, writing for a unanimous Court:

ANILCA itself accordingly carves out numerous Alaska-specific exceptions to the Park Service’s general authority over federally managed preservation areas. … Those Alaska-specific provisions reflect the simple truth that Alaska is often the exception, not the rule. Yet the reading below would prevent the Park Service from recognizing Alaska’s unique conditions. Under that reading, the Park Service could regulate “non-public” lands in Alaska only through rules applicable outside Alaska as well. … Whatever the reach of the Park Service’s authority under ANILCA, we cannot conclude that [the statute] adopted such a topsy-turvy approach.

But the Court’s opinion does not settle “the reach of the Park Service’s authority.” Several arguments remain over which entity can regulate the lands in question—Alaska or the National Park Service—and whether Sturgeon can ride his hovercraft down the Nation River again.

Those questions will also determine whether parties traveling through uninhabited and unmarked parts of Alaska will continue to face the significant problems of regulatory enforcement that Sturgeon faces. The problems arise from two facts. First, Alaska has vast, uninhabited, and unsurveyed areas that do not clearly identify what property belongs to the federal government. The land at issue is so riddled with “mountains, hills, valleys, and rivers” that even professional geographers ask, “How can we make sense of this complexity?”

Second, National Parks Service regulations buried deep within the Code of Federal Regulations outlaw conduct that no one would instinctively know is illegal.

Add the fact that the federal government does not demarcate its land everywhere, and it can be impossible to know when one is on land subject to federal regulation, let alone what those regulations are.

The criminal law should enforce moral codes that everyone instinctively knows, not arcane regulatory objectives that can trap real unwitting individuals like John Sturgeon. As argued elsewhere, “[w]here the government has criminalized non-blameworthy conduct for regulatory purposes,” as the rules above have, ignorance of such laws “should be a valid defense to criminal liability.” Sturgeon’s case already advances that principle by clarifying that a federal agency cannot enforce its regulations where Congress has forbidden them. But a mistake of law defense would further protect him and others like him from unjust criminal liability.

Whether John Sturgeon can ride his hovercraft down the Nation River again remains an open question. It will also determine whether it is a crime in the Alaskan wilderness to park badly, toss a stick, roll something down a hill, ski across a parking lot, “let” a dog bark, or partake in many other arcane and irrational regulatory offenses.