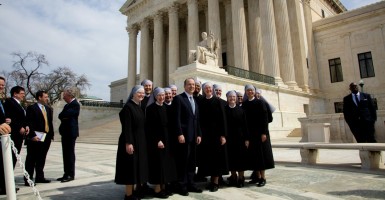 Though Supreme Court watchers initially expected a decision by the end of June, it’s possible that the justices could decide to reschedule the case for reargument. (Photo: Jeff Malet Photography/Newscom)

In an order Tuesday afternoon, the Supreme Court asked the petitioners and Obama administration to file supplemental briefs in the consolidated challenge to Obamacare’s requirement that nonprofit employers provide employee health insurance coverage that includes potentially life-ending drugs and devices.

Many employers, such as the Little Sisters of the Poor, Priests for Life, and religious colleges and charities, object to including Plan B, ella, contraception, and sterilization in their health insurance plans. Under the current regulations, employers must either submit a self-certification form to their insurer or health plan administrator or notify the Department of Health and Human Services of their religious objection to providing such coverage in writing and provide contact information for their health plan insurer or third-party administrator.

Either way, the actions taken by the employer will authorize the inclusion of coverage of the objectionable drugs and devices in its health plan. The Little Sisters and other challengers believe that forcing them to engage in such conduct that will trigger morally objectionable health care coverage makes them complicit, and that imposes a substantial burden on their free exercise.

If they refuse to comply, they face ruinous fines. For example, the Little Sisters, a group of nuns who beg for funds for the elderly they serve and their own food, would face $70 million per year in penalties for failure to comply.

The justices heard oral arguments in the case just last week. Now they are asking the parties to address how employees would obtain contraceptive coverage through their employer’s insurance companies without any involvement from the employer, including notifying the government, their insurer, or a third-party administrator of their objection.

[T]he Little Sisters made it clear today that they object to the government taking over their health care plan and forcing them to facilitate abortion/contraceptive coverage or “pay millions of dollars in penalties,” according to [their lawyer]. This regulatory scheme just forces them to violate their religion in a different way. In fact, this became quite a contentious issue during oral arguments, with Justice Anthony Kennedy at one point referring to the government “hijacking” the Little Sisters’ health plan, which Chief Justice Roberts said was “an accurate description of what the government wants to do,” making the Little Sisters “complicit” in what they consider a sin.

Now the parties have the opportunity to spell out for the Supreme Court how such a system could work without “hijacking” the Little Sisters’ and other employers’ insurance plans. This order may signal that a majority of the justices accept the challengers’ sincerely held religious belief that the current regulatory scheme makes them complicit in sin.

Hopefully, the Court will follow its longstanding precedent, Thomas v. Review Board of Indiana Employment Security Division, which prohibits courts from being “arbiters of scriptural interpretation.” Courts have no business drawing lines when it comes to theological questions.

Briefs are due April 12. Though Supreme Court watchers initially expected a decision by the end of June, it’s possible that the justices could decide to reschedule the case for reargument, as was the case in Citizens United v. Federal Election Commission in 2008.