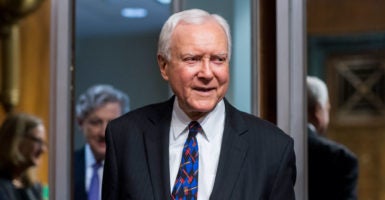 The Senate and the American people will lose a champion for conservative principles when the longest-serving Republican senator in history, Orrin Grant Hatch of Utah, retires next year.

The reform bill he introduced last week proves that, after 41 years in the Senate, Hatch is still building a legacy for advancing the rule of law and fundamental fairness in application of our nation’s criminal laws.

Hatch announced his plans to retire in January. Soon thereafter, our Heritage Foundation colleague Paul J. Larkin Jr. shared three conclusions about Hatch, whom Larkin worked for in the 1990s.

The proof, as they say, is in the pudding.

Hatch was a conservative leader in the judicial confirmation process during the Reagan era, when judges such as Antonin Scalia and Robert Bork joined the bench. They rejected the governing ideology of living constitutionalism that existed at most elite law schools, and chose instead to focus on the plain text of statutes and the original public meaning of the Constitution when resolving cases.

Throughout his career, Hatch also has consistently demonstrated respect for the rule of law outside his role in judicial confirmations.

As just one example, Hatch long has defended the traditional role of mens rea as one of two essential components of a crime. Mens rea is Latin for “guilty mind,” and refers to bad intent behind a crime. Actus reus, Latin for “guilty act,” refers to the bad act in a crime.

Hatch’s work to preserve mens rea in criminal law stands out in an era when Congress has proven all too willing to ignore the fundamental moral distinctions between accidents, mistakes, and misconduct that are best addressed through civil and administrative law, and inherently immoral acts that truly deserve criminal sanction.

As one of us, John Malcolm, has written:

Proof of mens rea—a guilty mind—has traditionally been required to punish someone for a crime because intentional wrongdoing is more morally culpable than accidental wrongdoing; our justice system has usually been content to evaluate accidents that injure others as civil wrongs, but criminal punishment has been reserved for people who do bad acts on purpose. But that has changed as legislators and regulators have begun to see the criminal justice system, not as a forum for ascertaining moral blameworthiness and meting out punishment accordingly, but as just another tool in the technocratic toolbox for shaping society and preventing social harm.

Consistent with his principled conservativism, Hatch long has advocated mens rea reform to reverse that unfortunate trend. He introduced legislation in 2015 and 2017, and, last week, he introduced the Mens Rea Reform Act of 2018.

Hatch’s latest bill takes a modest and sensible approach to mens rea reform by requiring that, for any future federal crime promulgated after the date the bill becomes law, the government must prove beyond a reasonable doubt that a defendant “willfully” committed the offense, unless Congress specifies another state of mind to complete the offense in the law itself.

The bill would establish a National Criminal Justice Commission to identify any existing criminal offenses that “have no [mens rea] requirement specified in the text of the offense or Supreme Court precedent,” as well as those that “should not have a [mens rea] requirement, based on specified criteria related to the Federal interest in protecting public health and safety and the potential penalty attached to a violation of the covered offense.”

The bill would require the new National Criminal Justice Commission to report its recommendations to Congress within three years, and give Congress two additional years to act on those recommendations.

The bill would also give federal agencies three years—beginning after the commission submits its report to Congress—to conduct a rulemaking process to specify a mens rea standard (other than strict liability) for any regulations under their purview that purport to define criminal offenses. Any criminal regulation left on the books after this six-year window that lacks a mens rea standard would be invalid.

Allowing the commission, Congress, and federal agencies a chance to study and amend existing laws and regulations is meant to satisfy some past criticism of Hatch’s prior reform bills. One argument against them has been that an abrupt application of a default mens rea standard to scores of criminal statutes and regulations that lack them, without first identifying each provision for individual consideration, might lead to unintended negative consequences. Hatch’s latest proposal eliminates that concern.

In a press release, Hatch reiterated his commitment to mens rea reform as well as other criminal justice reforms pending in the Senate.

One, the FIRST STEP Act, is a prison reform bill designed to lower recidivism rates, reduce skyrocketing prison spending, and better prepare inmates for a successful and prosperous life after prison. The House recently passed the bill, an important public safety measure, by an overwhelming bipartisan vote of 360-59.

The Sentencing Reform and Corrections Act, sponsored by Judiciary Chairman Chuck Grassley, R-Iowa, takes a broader approach to criminal justice reform by addressing sentencing and a host of other issues.

“While I believe a comprehensive approach is the best way to ensure each of these key priorities are met,” Hatch said, “I am fully supportive of making incremental progress where we can.”

Now, the Senate is deliberating on which direction, if any, it will take on criminal justice reform.

The White House, for its part, consistently has supported the House-passed prison reform bill.

Whether or not Hatch’s bill, or any criminal justice reform bill, ultimately reaches President Donald Trump’s desk for his signature, Hatch deserves credit for ensuring that Senate debates on these reforms are as comprehensive and thoughtful as possible.

However the Senate debate unfolds, Hatch’s consistent support for the rule of law will be an integral part of his legacy as a senator, and deservedly so.