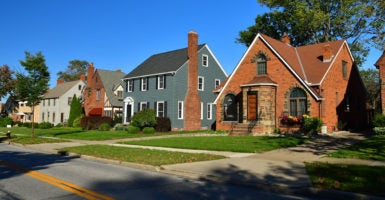 Jessica Barron and Kenny Wylie, a couple renting their single-family home in Granite City, Illinois, know all too well that no good deed goes unpunished.

For two years, the parents of three children worked to make their modest home comfortable, not only for their family, but also for friends of their children who needed care, support, or simply a bed to sleep in for short periods of time.

Their willingness to open their home to teenagers in need, however, was rewarded with an eviction notice after one of their temporary house guests burglarized a local restaurant.

To be clear, neither Barron nor Wylie was complicit in their guest’s crime. In fact, Barron had prohibited the young man from returning to her family’s home after she caught him trying to steal from her, before he burglarized the restaurant.

What’s more, it was Barron who called the police to arrest him after the burglary when she found him hiding in her home’s crawlspace.

The officers arrested the teen, and Barron and Wylie thought that was the end of it.

But more than a month later, officers returned and ordered their landlord to evict them, pursuant to the city’s crime-free housing ordinance.

The ordinance requires landlords in Granite City to obtain and annually renew a license to rent out their residential property. In order to obtain or renew the license, landlords must include a mandatory addendum to their leases and must evict any tenant who violates the ordinance or the addendum.

The lease addendum is the source of the crime-free housing policy’s inequities. Combined with the requirements of the ordinance, it requires a landlord to evict a tenant when any member of the tenant’s household commits a crime in the city, or when a guest of the tenant commits a crime on or near the property.

In order for a landlord to maintain his license, he must evict any tenant who violates the addendum.

The addendum is vague and overbroad, as Barron and Wylie’s case illustrates. The police decided that their 19-year-old former houseguest was a member of their “household,” and therefore, his burglary meant that Barron and Wylie violated the addendum and had to be evicted.

Not only is this outcome unjust, it discourages communities from helping troubled friends and family, and therefore encourages crime and recidivism. Without housing and a support network, it’s difficult for anyone to get on—or stay on—the right path.

And what of Barron and Wylie? They did nothing wrong. They didn’t hide their houseguest after he committed a crime. They didn’t help him commit a crime, and they didn’t commit any crimes themselves. In fact, they turned him in. And yet they’re set to be evicted.

And what of their landlord? He doesn’t want to evict them. He thinks they’re good tenants and that the property should be his to rent out as he sees fit.

But none of them has a say in the matter.

So, all three of them, with help from the Institute for Justice, have joined forces to sue the city to stop the eviction.

They argue that Barron and Wylie are being unfairly punished for someone else’s crime, which violates their right to due process. Their argument is a strong one.

It’s based primarily on a Supreme Court case, Department of Housing v. Rucker. The Supreme Court ruled that when the government acts as a landlord of government-owned housing, it can evict tenants when their guests commit crimes.

But the court went out of its way to say that when the government is not acting as a landlord, but is instead “attempting to criminally punish or civilly regulate” members of the general public, it cannot punish people for the crimes of others.

That reasoning seems to apply in Barron and Wylie’s case, so with any luck, they may not lose their home. But it’s a shame that Granite City is trying so hard to punish their good deed.