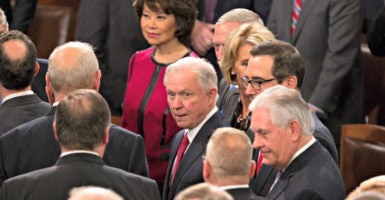 In his first speech to a joint session of Congress, President Donald Trump spoke eloquently Tuesday night about the need to “break the cycle” of violence and poverty, Heritage Foundation legal expert John Malcolm observes.

“Combating this problem,” Malcolm writes, “will be one of the president’s greatest challenges, and his success will have much to do with establishing his legacy.”

Trump already is laying the foundation to address these challenges, having issued several executive orders designed to reduce crime and improve public safety. Interestingly, two of those orders call for review of existing federal criminal law and policy, and set new priorities for federal law enforcement.

When White House and Justice Department officials do review the federal criminal code, they should consider ways to restore federalism in law enforcement and reduce overcriminalization to bring more clarity to the law and more resources to bear on the administration’s priorities.

One of Trump’s orders sets forth broad executive branch policies to “dismantle transnational criminal organizations” that target or work within the United States. It prioritizes lawful data gathering and information sharing among U.S. agencies and with foreign partners, as well as a review of relevant federal policies and laws to crack down more efficiently on drug cartels.

A second executive order instructs the attorney general to create a task force to develop strategies to reduce crime, with priority attention to “illegal immigration, drug trafficking, and violent crime.” The order gives the task force several broad mandates, including one to “identify deficiencies in existing laws that have made them less effective in reducing crime and propose new legislation that could be enacted to improve public safety and reduce crime.”

We require federal law enforcement agencies to do difficult and dangerous jobs with finite resources and personnel. Removing from the criminal code both trivialities and matters best left to states, localities, or the civil justice system could enhance the bandwidth of these agencies.

It could allow them to refocus on the policy priorities in Trump’s executive orders: drug cartels, violent gangs, and support for police in their mission to protect and to serve American neighborhoods.

Finally, it would have the salutary effect of eliminating the specter of criminal liability for conduct that otherwise law-abiding Americans regularly and harmlessly engage in.

“So many [crimes] like larceny and murder … these things have traditionally been totally the responsibility of the states,” then-Sen. Jeff Sessions said at his confirmation hearing for attorney general.

Sessions added: “Now we have forgotten that distinction, that limitation on federal power.”

The framers of our Constitution never intended for this to happen. As Edwin Meese III, the 75th U.S. attorney general, points out, we have as much need for “federalism in law enforcement” today as our forefathers did in 1789.

For the Trump administration to refocus federal criminal law enforcement priorities as expressed in the president’s executive orders, it should first be able to state clearly what is and is not a federal crime. As it stands, no one knows how many crimes there are, where they are published, or all of the conduct they define as criminal.

Ronald Gainer, a former Department of Justice official, said “you will have died and [been] resurrected three times” before you have an answer to any of these questions.

Identifying all criminal statutes and publishing them in one title of the U.S. Code where everyone—police, prosecutors, politicians, and citizens alike—can access them would be a wise start to a new federal stance on crime. Meese urged Congress to do that in 2011, in testimony titled “Principles for Revising the Criminal Code.”

To reset enforcement priorities, the Trump administration should work with Congress to eliminate laws and regulations that are used for little more than filling up pages in the federal register, or for expressing contempt for certain misconduct, often low-level antics rather than the kinds of serious organized crime that is the subject of Trump’s executive orders.

These laws and regulations nonetheless might ensnare unwary citizens. Yet there is no compelling reason to pull federal law enforcement resources away from fighting international drug cartels and violent gangs to address conduct such as the following:

• Selling chili con carne without enough meat.
• Chewing gum on the job if you are a kumquat handler.
• Selling “home-repair kits for dentures” that aren’t for “emergency repairs only.”

The @CrimeADay Twitter account lists those and many more seemingly innocuous acts that are, in actuality, federal crimes. (Perhaps @realDonaldTrump will take a look.)

You can’t expect a federal agent to run down drug traffickers, after all, if he or she is in hot pursuit of diseased theatrical poultry. Yes, it is “a federal crime for a theatrical pigeon to return to the U.S. from Mexico with a disease.”

The Trump administration should review the bloated federal criminal code and identify for revision or repeal any provisions that lack a clear and compelling federal law enforcement interest.

Conservatives in Congress, including House Judiciary Chairman Bob Goodlatte, R-Va., and Senate Finance Chairman Orrin Hatch, R-Utah, have called for a review of the criminal code. Several U.S. Supreme Court justices have written about the problems of federal overcriminalization—Antonin Scalia was one, Elena Kagan is another, and, if confirmed, Neil Gorsuch would be a third.

The views of such legislators and justices on the criminal code fit well with the enforcement priorities announced in Trump’s executive orders, and more broadly, two of the most consistent themes in his first address Tuesday night: increasing public safety and returning power to the states and the people.

To ensure that adequate resources exist to accomplish these worthy objectives, we need a long overdue “spring cleaning” of the criminal code and enforcement priorities to distinguish more clearly between what should be handled by federal law enforcement authorities, what should be left to state and local authorities, and what offenses might best be left to the civil justice system.