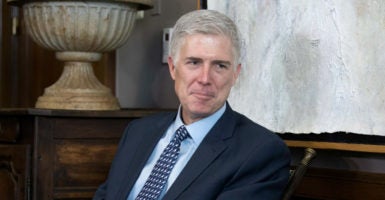 Heritage Foundation legal scholars and others have noted a number of similarities between the two great judges, and one of them is their sensitivity to issues of overcriminalization.

If confirmed to the bench, Gorsuch would carry on Scalia’s legacy of respect for the rule of law and his keen awareness of how federal criminal law has been misused to punish Americans for minor mistakes that don’t warrant federal prosecution.

Here is some direct evidence.

Most fishermen can spin a yarn, but in 2007, Florida fisherman John Yates probably never imagined that tossing undersized fish overboard to avoid a citation would bring him before the United States Supreme Court.

Much less, he never expected he would be fighting a maximum 20-year federal prison sentence for allegedly violating the Sarbanes-Oxley Act.

Congress enacted that statute after the Enron fiasco to prevent auditors from destroying corporate records that may contain evidence of crime, thereby obstructing federal investigations.

At oral argument, Scalia balked at the absurdity of Yates’ predicament. He made clear that twisting fairly trivial misconduct already banned by state law into a major federal felony offense is unwise, to say the least.

“This captain is throwing a fish overboard,” said Scalia. “He could have gotten 20 years … What kind of a mad prosecutor would try to send this guy up for 20 years?”

Scalia said that he would be cautious about “how much coverage I give to severe statutes” if prosecutors could stretch them beyond their breaking point.

Justice Elena Kagan wrote in her dissenting opinion that Yates’ case spotlights “overcriminalization and excessive punishment in the U. S. Code,” resulting from an excess of “bad law—too broad and undifferentiated, with too-high maximum penalties, which give prosecutors too much leverage and sentencers too much discretion.”

Kagan called the situation “not an outlier, but an emblem of a deeper pathology in the federal criminal code.”

Gorsuch and Scalia in Lockstep

In one of Scalia’s many pithy dissents—this one in Sykes v. United States (2011), ruling that Indiana’s felony vehicle flight offense counts toward the Armed Career Criminal Act’s sentencing scheme—he directly addressed the legislature’s role in overcriminalization:

We face a Congress that puts forth an ever-increasing volume of laws in general, and of criminal laws in particular. It should be no surprise that as the volume increases, so do the number of imprecise laws. And no surprise that our indulgence of imprecisions that violate the Constitution encourages imprecisions that violate the Constitution. Fuzzy, leave-the-details-to-be-sorted-out-by-the-courts legislation is attractive to the Congressman who wants credit for addressing a national problem but does not have the time (or perhaps the votes) to grapple with the nitty-gritty. In the field of criminal law, at least, it is time to call a halt.

Gorsuch matches not only Scalia’s respect for the principle that judges are not empowered to rewrite or repeal law as they see fit, but also Scalia’s aversion to ramping relatively minor state offenses into major federal prosecutions, or otherwise turning innocent conduct into a crime.

And Gorsuch matches Scalia’s wit, too, especially when it comes to issues of overcriminalization. In a 2013 lecture titled “Law’s Irony,” published in the Harvard Journal of Law and Public Policy, Gorsuch wrote that today’s criminal justice system “bears its share of ironies.”

He noted that “today we have about 5,000 federal criminal statutes on the books, most of them added in the last few decades, and the spigot keeps pouring, with literally hundreds of new statutory crimes inked every single year.”

And that does not “begin to count the thousands of additional regulatory crimes buried in the federal register,” said Gorsuch. “There are so many crimes cowled in the numbing fine print of those pages that scholars have given up counting and are now debating their number.”

He cited a few examples:

Gorsuch summed up the problem: “Whether because of public choice problems or otherwise there appears to be a ratchet, relentlessly clicking away, always in the direction of more, never fewer, federal criminal laws.”

He asks, “What happens to individual freedom and equality when the criminal law comes to cover so many facets of daily life that prosecutors can almost choose their targets with impunity?”

Digging into America’s common law history, Gorsuch explained that the “excesses of executive authority invited by too few written laws led to the rebellion against King John and the sealing of the Magna Carta, one of the great advances in the rule of law.”

Looking further into the history of criminal law, Gorsuch noted how “history bears warning that too much—and too much inaccessible—law can lead to executive excess as well. [The Roman emperor] Caligula sought to protect his authority by publishing the law in a hand so small and posted so high that no one could really be sure what was and wasn’t forbidden.”

The American framers were well aware of this history.

“[James] Madison warned that when laws become just a paper blizzard citizens are left unable to know ‘what the law is’ and to conform their conduct to it”—and Gorsuch warns today that either “too much or too little can impair liberty.”

Scalia’s forceful dissent in Sykes v. United States provides some insight into how today’s bloated federal criminal code imperils liberty. Heritage legal scholars and many others have written extensively on the pitfalls, perils, and paths away from overcriminalization.

But as Gorsuch continues in his lecture, “The fact is, the law can be a messy, human business.”

Like Scalia, however, Gorsuch would look to “careful application of the law’s existing premises,” rather than his view on what the law should be, to resolve contemporary social problems.

For that and many other reasons, Gorsuch and Scalia are of like minds.

Both demonstrated respect for the constitutional right to life and the death penalty as punishment for a capital offense, for example. Both are devoted textualists whose opinions reject legislating from the bench.

And Gorsuch would continue Scalia’s legacy on many issues of criminal law—including a sharp, conservative skepticism of the federal government’s ever-increasing expansion of criminal liability.