This Bird Regulation Might Have Made You a Criminal. Not Anymore. 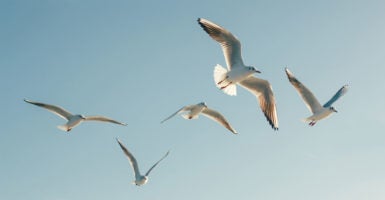 The Department of Interior officially reversed its Obama-era interpretation of the Migratory Bird Treaty Act on Dec. 22. (Photo: iStock Photos)

If you live someplace with a window, own a cat, or drive a car, then a recent change to a federal regulatory policy should come as a welcome relief.

On Dec. 22, the Interior Department’s Office of the Solicitor published a memorandum (Memorandum M-37050) stating that it interprets a federal criminal law against “taking” or harming migratory birds to apply only to “direct and affirmative, purposeful actions.”

That overturns the policy of previous administrations that, under the Migratory Bird Treaty Act, individuals could be held criminally liable for virtually any accident that harms any of the approximately 1,000 bird species protected under the law.

The solicitor’s narrow change relieves the public—from animal-loving kids to oil rig operators—from the specter of overreaching enforcement. That is no small consideration: Under the previous policy, criminal prosecution was no idle threat.

In 2002, the U.S. District Court for the District of Columbia declared that members of the military violated the act by unintentionally killing protected birds that flew into a live-fire training area.

Congress had to adopt legislation clarifying that accidentally shooting birds during authorized military training activities is not a crime.

And in 2012, several oil and gas businesses in North Dakota were prosecuted because 28 protected birds had flown into state-sanctioned pools of fluid and oil. District Court Judge Daniel L. Hovland dismissed the prosecution and clarified that the law should not be read to make “legal, commercially useful activity” a crime.

The Wall Street Journal had suggested the Obama administration’s data on thousands of bird deaths in wind turbines, combined with a failure to prosecute the turbine operators, revealed a government bias against certain kinds of energy companies.

Those stories illustrate how broad statutes enable overzealous and biased enforcement. And the Migratory Bird Treaty Act is extraordinarily broad, providing that:

It shall be unlawful at any time, by any means or in any manner, to pursue, hunt, take, capture, kill, attempt to take, capture, or kill, possess, offer for sale, sell, offer to barter, barter, offer to purchase, purchase, deliver for shipment, ship, export, import, cause to be shipped, exported, or imported, deliver for transportation, transport or cause to be transported, carry or cause to be carried, or receive for shipment, transportation, carriage, or export, any migratory bird, any part, nest, or egg of any such bird, or any product, whether or not manufactured, which consists, or is composed in whole or part, of any such bird or any part, nest, or egg thereof.

Some prosecutors and judges have read the Migratory Bird Treaty Act as disregarding an offender’s intent, subjecting those who accidentally ran afoul of the law to potential criminal conviction if a protected bird’s death could have been “reasonably anticipated or foreseen as a natural consequence” of their actions.

That might seem like a reasonable interpretation, but consider the Fish and Wildlife Service’s top three “human-caused threats to birds”:

If a common raven has ever flown into your car, or a northern flicker has flown into your window, or any of the other hundreds of protected birds have been on the wrong side of your pet’s paws, then the Migratory Bird Treaty Act technically made you a criminal.

That made for a very uncertain regulatory environment, and prosecutors could decide, sometimes arbitrarily, how hard to bring the hammer down.

Moreover, the Interior Department solicitor’s opinion explains, the standard for deciding how many charges to file in cases involving multiple bird deaths was a little loosey-goosey: one charge “per bird, one per species, one per incident, one per site? Virtually all of these parsings have been used in past cases.”

Such a broad regulatory scheme can be detrimental, even to those who never face prosecution. As Heritage Foundation legal scholar Paul J. Larkin Jr. has written:

The increasing use of criminal laws as regulatory penalties amplifies the risk that people, especially those who own or manage small businesses, may be deterred from pursuing legitimate activities due to the fear that they could commit a crime by unwittingly crossing one of the many obscure lines drawn by statutes [and] regulations … .

The Interior Department is right to bring balance and clarity to the law.

The solicitor’s opinion returns toward the law’s original purpose, which was to restrict excessive hunting of migratory birds, not to regulate vast swaths of the economy.

Now, people can let their cats outside, leave their windows shut, and drive their cars with a little less worry. Land developers, oil and gas company workers, and even wind turbine operators can all breathe a little easier, too.

Other departments and agencies, as well as Congress, should follow Interior’s lead on cutting back overly intrusive regulations, especially when they carry the specter of a criminal conviction.