Trump Is Leading the Way on Conservative Criminal Justice Reform. Here’s the Proposal. 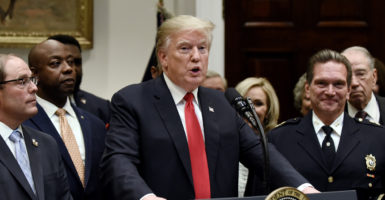 This past May, the Trump administration’s leadership on meaningful, conservative criminal justice reform helped the House to pass the Formerly Incarcerated Reenter Society Transformed Safely Transitioning Every Person (or First Step) Act by a vote of 360 to 59.

On Wednesday, President Donald Trump announced his support for the Senate’s amended version of the First Step Act, including some modest yet much-needed sentencing reforms.

Now is the time for the full Senate to debate whether it will approve this bill, return it to the House for a vote, and send it on to the president—who said he “will be waiting with a pen” for Congress to get this done, because “it is the right thing to do.”

Federal prisons, like any other function of the federal government, should also be judged by outcomes, not intentions—by data, not rhetoric.

In 2011, the House Appropriations Committee reported that, despite skyrocketing spending, “reincarceration rates for people released from prison are largely unchanged. This trend is both financially and socially unsustainable.”

But that committee saw a silver lining: “[C]ase studies of innovative, evidence-based practices provide a strong indication that [the trend] can be reversed.”

Now, the Trump White House and the 115th Congress are, to their credit, seeking out better policies and programs, which have been proven to reduce recidivism at the state level, to address these problems.

The thrust of the First Step Act is an attempt to reduce the high recidivism rates that currently exist—and they certainly are high. In 2016, the U.S. Sentencing Commission estimated that 49.3 percent of federal offenders who were released in 2005 were re-arrested within eight years, and a Bureau of Justice Statistics study of 30 states found that among offenders who were released from state custody in 2005, 76.6 percent were re-arrested within five years.

After all, 95 percent of all individuals who are presently incarcerated will eventually be released. They are going to be our neighbors, and we ought to be concerned about what kind of shape they are going to be in when they are released. Will they become law-abiding citizens? Or will they return to a life of crime and endanger our safety?

The First Step Act would require the Department of Justice to adopt a validated risk assessment tool and apply it to every federal inmate to determine if they are a minimal, low, medium, or high risk of recidivating upon release.

And each inmate would undergo a “needs assessment” to determine if some factor—such as a lack of education or job skills, a mental illness, or a substance abuse issue—contributed to his criminal behavior but might be meaningfully addressed while he is incarcerated.

The First Step Act would then require the Bureau of Prisons to offer programs that are designed to address these issues, and offer certain inmates incentives to take and complete those courses in order to reduce the risk that they will return to a life of crime once they are released.

The bill would exclude inmates who are convicted of many serious offenses—mostly violent crimes, terrorism-related offenses, and child exploitation crimes—from taking advantage of these incentives.

Significantly, these incentives would not reduce anyone’s sentence.

They would simply allow minimum- and low-risk inmates to earn credits that they could cash in toward the end of their sentence that may allow them to be released from prison to a lower-cost alternative of community supervision—including home confinement or a half-way house—to serve out the remainder of their sentence.

Of course, if they violate any of the conditions of their release, they can be sent right back to prison.

Medium- and high-risk prisoners would be able to accrue other benefits such as increased visitation hours and increased telephone privileges.

The First Step Act is premised on the belief that while some hardened and violent offenders will likely always pose a threat to public safety and should remain incarcerated, evidence shows that many offenders can, through some of these programs, end up becoming productive, law-abiding members of society, breaking the pernicious cycle that currently exists of prisons becoming a revolving door.

After all, if we do what we have always done—warehouse offenders without addressing some of the underlying issues that caused them to commit crime in the first place—we will get what we have always gotten: people who leave prison and quickly return to a life of crime, thereby endangering public safety.

The Senate has also added four important, yet modest, sentencing reforms. The first involves what is known as a “stacking” problem.

A federal law (18 U.S.C. § 924(c)) provides an extra mandatory penalty for possessing (five years), brandishing (seven years), or discharging (10 years) a firearm during the commission of a drug offense. It also provides an additional mandatory minimum sentence of 25 years for each subsequent § 924(c) conviction. And the law requires that these mandatory prison terms be served consecutively.

Unfortunately, the way the law was written allowed for even individuals with no prior criminal history, who engaged in a series of drug transactions while carrying a weapon, to be sentenced to multiple consecutive sentences.

Angelos had no criminal record, but on three separate occasions he sold marijuana worth a total of $350 to a police informant, and each time he had a firearm—which he never brandished or used. Nonetheless, the prosecutor charged Angelos with three separate drug transactions and three separate § 924(c) charges for possessing a firearm on each of these occasions.

Angelos was convicted of these charges. His sentence for the underlying drug offense (based on the total quantity of drugs that he sold), plus the five-year penalty for possessing a firearm during the first transaction, plus 25 years for each of the “subsequent” 924(c) offenses, all added up to a first-time sentence of 55 years.

To address that unduly harsh penalty, the First Step Act would clarify that a “subsequent” conviction, for purposes of § 924(c), means an offense committed after being released from prison for having committed a prior § 924(c) offense.

The second sentencing provision involves the Fair Sentencing Act of 2010, which reduced the weight disparity between crack and powder cocaine mandatory minimum sentences from 100-to-1 to 18-to-1. Congress decided that this disparity resulted in sentences that were unfair and too draconian.

But Congress made that relief only available to those convicted after the law’s enactment, which strikes some people as unfair. After all, if Congress thought that the old sentencing regime was fundamentally unfair, then why shouldn’t it offer some potential relief to people who were sentenced under this old regime?

The government would have the opportunity to file any objections it wants to, and the court would not have to grant the inmate’s motion.

In order to qualify for the safety valve, an offender must meet a strict five-part test, including the fact that the offense did not result in a serious bodily injury, no firearm was used, the offender admits his guilt and tells the government everything he knows, and the offender was not an organizer or leader of the illegal conduct.

But by offering relief to defendants with only the slightest criminal record, if any, the safety valve left some very low-level offenders subject to rather draconian mandatory minimum penalties.

Too often, low-level drug offenders—usually couriers or mules—face mandatory minimum penalties because they are charged as part of a drug conspiracy in which they are sentenced based on whatever amount of drugs was sold by everyone involved in the conspiracy, even if the courier or mule did not know everyone, or the quantity of drugs, that was involved.

According to a recent report by the U.S. Sentencing Commission, a “significant portion of offenders who performed relatively low-level functions did not qualify under the safety valve provision. For example, a significant portion of couriers (31.9 percent), mules (28.8 percent), and employees/workers (33.9 percent) did not qualify for the safety valve in fiscal year 2016.”

The First Step Act would slightly expand the parameters of the existing safety valve to enable judges to sentence more low-level offenders (assuming they meet the other four prongs of the current five-part test) who have a modest criminal record of nonviolent offenses without regard to the mandatory minimum penalty that might otherwise apply. This would go a long way toward avoiding incidents of manifest injustice.

The fourth proposal provides modest reductions of severe sentence enhancements for repeat drug offenders (under 21 U.S.C. § 841, 851) without eliminating the enhancements.

It does not matter how old the prior conviction was, whether it resulted in a prison sentence, or even whether it involved a small amount of drugs for personal use, so long as it was a felony conviction. That means that even a youthful offender who was convicted of simple possession and given a probated sentence might get clean for a time but be convicted of another drug offense years later, and face a severe decades-long sentence.

The bill would also limit the prior eligible convictions to ones in which (1) the person served more than one year in prison, and (2) the release from imprisonment was within 15 years of the commission of the current offense.

As one of us, John Malcolm, has written elsewhere, “sentencing judges always retain the discretion to sentence an offender to a period of incarceration up to the statutory maximum, which is often far longer than the specified mandatory minimum penalty—so the worst of the worst would still be punished accordingly.”

Thus, the president is right to champion this “bipartisan agreement” to “make communities safer and give inmates a second chance … while keeping dangerous and violent criminals off our streets.”

“Throughout this process my administration has worked closely with law enforcement,” Trump said, “to ensure that the legislation remains tough on crime” and supports police. Several major law enforcement groups, including the Fraternal Order of Police, the National Organization of Black Law Enforcement Executives, and the International Association of Chiefs of Police, support this initiative.

With a target date of Dec. 14 for indefinite adjournment, however, senators now have a narrow window in which they can approve this bill.

On Wednesday, the president urged both chambers of Congress to do so quickly and to present it to him for his signature. Here’s hoping that Congress appreciates Trump’s message and the historic opportunity at hand.

As Trump said earlier this year, it is an opportunity to help “make our communities more secure … to make our country more prosperous,” and to “make America safer, and stronger, and greater.”