More on Criminal Justice Reform: A Response to Paul Mirengoff 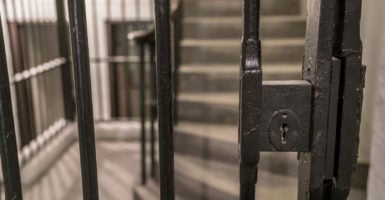 "There are many people who are presently incarcerated who could, if given the proper skills, counseling, and encouragement, become productive, law-abiding members of society after serving a reasonable sentence for the crimes they have committed," writes John Malcolm. (Photo: Marbury/Getty Images)

Opposition to the criminal justice reform proposals that the Senate is now considering, which promise significant public safety gains, continues to miss the mark.

Last week, Sen. Tom Cotton, R-Ark., wrote an editorial in The Wall Street Journal expressing his strong opposition to some modest sentencing reform proposals that have been offered by Sen. Chuck Grassley, R-Iowa, as a potential accompaniment to the prison reform measures in the FIRST STEP Act, which the House passed in late May with overwhelming bipartisan support.

Former U.S. Attorney for Utah Brett Tolman and I co-authored an article expressing respectful disagreement with Cotton for reasons I will not repeat here.

My friend Paul Mirengoff has now written a thoughtful response in Power Line supporting Cotton and stating that Tolman and my arguments “come up short.”

Before responding briefly to Mirengoff, I would note that there are several points that we made that he appears to concede (or at least did not address).

For example, he does not take issue with the fact that other factors beyond mandatory minimum sentencing, such as improved policing practices, are likely responsible for the bulk of the reduction in crime that we have experienced over the last two decades.

He does not dispute the fact that the United States Sentencing Commission has determined that many low-level drug offenders—usually couriers or mules—end up getting charged with mandatory minimum penalties because they are charged as part of broad-ranging drug conspiracies in which they are sentenced based on the total amount of drugs sold by everyone who participated in that conspiracy, even if they never knew who these people were or what quantity of drugs they sold.

He does not dispute the fact that sentencing judges always retain the discretion to sentence an offender to a period of incarceration up to the statutory maximum, which is often far longer than the specified mandatory minimum penalty—so the worst of the worst would still be punished accordingly.

And he does not dispute that many states that have implemented their own reforms have experienced lower crime rates, lower recidivism rates, and lower costs.

Mirengoff does, however, make certain claims that I find puzzling. For instance, he states:

In addition to the fact that there is no link to the analysis, I am not sure how the author of that analysis derives these numbers. But let’s take a stab at it.

Under current law, an offender subjected to a mandatory minimum penalty can get a year knocked off his sentence if he successfully completes the Residential Drug Abuse Program. Of course, in order to qualify for the program—and the waiting list is long—an offender must have a documented substance abuse problem, and most violent offenders and many repeat offenders are ineligible to participate. Nothing that is being proposed would affect this program.

Then, under current law (18 U.S.C. § 3624(b)), an offender “may receive credit toward the service of the prisoner’s sentence … of up to 54 days at the end of each year of the prisoner’s term of imprisonment … subject to determination by the Bureau of Prisons that, during that year, the prisoner has displayed exemplary compliance with institutional disciplinary regulations.”

For a variety of reasons, the Bureau of Prisons has interpreted this law to allow for only 47 days of “good time” credit. The proposal being discussed would clarify that the Bureau of Prisons can award up to 54 days per year—in other words, an additional seven days beyond current practices, but only for model prisoners.

So far, so good. Any time earned under the Residential Drug Abuse Program or for “good time” credits can come directly off an offender’s sentence, which is already the case.

The same is not so for the next category of “reductions.”

The FIRST STEP Act would offer prisoners the opportunity to avail themselves of evidence-based programs tailored to meet their needs (job skills, GED classes, mental health or substance abuse treatment programs, etc.) which are designed and tested to reduce the risk that they will commit another offense upon release—thereby enhancing public safety.

If the bill is enacted, a low-risk prisoner would be eligible for up to 10 days’ credit (15 days for minimal risk prisoners) for every 30 days that a prisoner spends in one of these programs, assuming he successfully completes the program.

Mirengoff is clearly skeptical of the term “low-risk” offender, stating that, “Finding someone who will say a prisoner is ‘low-risk’ isn’t the same thing as being low-risk.” But it is not some individual who is making this determination. That designation is made based on a neutral, validated risk assessment tool, the kind that is often used today in the criminal justice system when making decisions about sentencing and pre-trial release (not to mention in a whole host of other industries, such as the insurance industry).

Further, there are many types of offenders who are simply ineligible to participate in these programs, including those convicted of drug crimes in which death or serious bodily injury occurred as a result of the offense, as well as a host of inmates who are convicted of violent offenses, child abuse charges, and the like. And, of course, for inmates who are eligible, such courses that the Justice Department itself has shown to reduce crime are currently few and far between in the federal system, which is one of the things the FIRST STEP Act hopes to remedy.

Significantly, unlike sentence reductions for participation in the Residential Drug Abuse Program and for receiving “good time” credits, any credits earned for participating in other prison programs envisioned by the FIRST STEP Act would not lead to a reduction in an offender’s sentence, only a change in the conditions of confinement.

An offender would be able to use those credits to serve a portion of his sentence in a half-way house or home confinement, subject to supervision by a probation officer, electronic monitoring, or other conditions.

The only way, I believe, that one could approach the numbers Mirengoff cites (I am still not sure how you get there, but math was never my strong suit) would be for a “minimal risk” inmate—a category where few convicted drug dealers are likely to fall—to successfully complete the Residential Drug Abuse Program (assuming he’s qualified, outlasts the waitlist, etc.), earn the maximum number of “good time” credits each year for good behavior, and then successfully complete, on a nonstop basis from the day he enters prison until the day he exits the prison gates, a series of FIRST STEP evidence-based programs (assuming he qualifies and that such programs are available).

Not only is this implausible, but, given the dearth of existing programs, it is impossible. Moreover, if it were possible to do this, anybody who exhibited that level of commitment to rehabilitating himself and becoming a productive member of society would certainly be extremely unlikely to commit another crime after completing his sentence.

Either way, that person would spend time in home confinement or some other form of community supervision and could be sent back to prison if he violated any condition of release, including by committing another crime.

Let me offer a concession to Mirengoff. There is, of course, the ever-present possibility that an offender who is given a second chance will commit additional crimes, including violent offenses. That occurs now—way too often—and will continue to occur regardless of what Congress does. The single overarching goal of the FIRST STEP Act is precisely to reduce how often that occurs.

When a released offender commits a violent offense, that is a tragedy, especially for the victim and that victim’s loved ones, and I do not make light of that or discount that possibility—an inevitability really. However, as with most things in life, there is a balance to be struck.

At the moment, there are many people who are presently incarcerated who could, if given the proper skills, counseling, and encouragement, become productive, law-abiding members of society after serving a reasonable sentence for the crimes they have committed and the harms they have caused.

This constitutes a huge waste in potential human capital. Moreover, resources devoted to keeping such people locked up for an undue length of time is time and money not spent on hiring additional law enforcement agents and prosecutors who could pursue other violent criminals who are on the streets but who ought to be behind bars.

One last thing, although I am sure Mirengoff meant no offense, he states toward the end of his article, “[T]he Koch Brothers and other fat cats who fund The Heritage Foundations aren’t going to be the victims of the crimes committed by the beneficiaries of the jailbreak they advocate.”

I welcome the opportunity to engage in a reasoned debate on contentious issues, and am always open to changing my mind. I would, however, like to assure the readers of this article that, while I certainly appreciate our donors, my views and those of my Heritage Foundation colleagues are not, have never been, and never will be for sale.