Biden’s Border Policy Is an Economic Boon for Cartels, Assault on American Communities 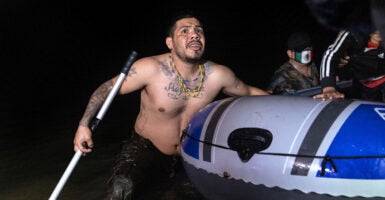 President Joe Biden’s border policies have allowed Mexican cartels to seal the U.S.-Mexican border and completely control crossings. Illegal immigrants who attempt to cross into the U.S. without going through the cartels are “made examples of,” one border resident said. Pictured: A human trafficker moves illegal immigrants up the bank of the Rio Grande after he smuggled them across the U.S.-Mexico border on April 14 in Roma, Texas. (Photo: John Moore/Getty Images)

President Joe Biden’s border crisis is routinely promoted by his administration and the leftist media as “an immigration system” that is “humane, orderly, and safe.” But on the U.S.-Mexican border, the harsh truth is that Biden’s “system” has led to booming business for the human and drug traffickers of the Mexican cartels.

In Cochise County, Arizona, rancher Jay Whetten told me in an interview how the Biden administration’s reversal of Trump-era border policies—tantamount to “telling people to come in”—has greatly increased the human and drug smuggling businesses of the cartels.

“The cartels are really, really, making a lot of money today,” said Whetten, who is former president of the Arizona Cattle Growers Association. “They have the northern border of Mexico sealed. Nobody comes through that border illegally without their authorization. It’s a money-making machine for them, and they don’t care about these people.”

John Guerrero, an Arizona border resident, provided intelligence analysis on border security as a former volunteer with the Southeastern Arizona Border Region Enforcement Team of the Cochise County Sheriff’s Office. A retired U.S. Army Ranger officer, Guerrero has observed a “remarkable shift in the environment on the border” since the Biden administration, marked by the large number of U.S. citizens acting as smugglers to receive the influx of drugs and illegal immigrants crossing into the U.S. through the Huachuca Mountains.

Guerrero described to me in an interview the clandestine nighttime maneuvers at Our Lady of the Sierras Shrine, a transition point for smuggling.

“Before the Biden administration came, we were experiencing a very calming environment,” Guerrero said. “Very few smugglers would go up to the [shrine] parking lot at night, it was very quiet. After the election, we started seeing [multiple] vehicles backing into the parking lots up here to wait [to receive drugs or people].”

Anyone providing transportation for the people that come across can easily park their vehicle, go up to the shrine, walk around the Stations of the Cross, and act as if they really belong there. But meanwhile their vehicle is unlocked and can be ‘uploaded’ while they’re walking around. [Then,] people or drugs are already packed up and [ready to] head north once they leave the shrine … and I-10, that’s the end zone.

If they can get there, they’re pretty much free [to go] east or west to larger cities.

Guerrero further commented that many smugglers receiving on the U.S. side are “not of Hispanic origin,” but he is seeing “middle-aged Caucasians” as more U.S. citizens join in the smuggling activity. “This is what we are challenged with,” he said. “Some now see it as a form of patriotic activism sanctioned by our president in his efforts to make the border more open.”

This is corroborated by the public statements of the Santa Cruz county sheriff in a March town hall meeting. And as noted by Guerrero, “These U.S. citizens have been encouraged to become political activists to … be part of the smuggling operation.”

Guerrero added, “But it [also] happens to pay well. That’s a new trend we had not yet seen.”

Stephanie Hubble, a small business owner in Sonoita, Arizona, told me in an interview that the Biden administration has created a huge problem for their communities.

“There’s a lot of money to be made off of illegal immigrants,” Hubble said. “They pay the ‘coyotes’ anywhere from $5,000 to $12,000 per person to come here. The coyote will hire load drivers, like from Phoenix, usually with criminal backgrounds, and pay them $500 to $600 to work for them.”

But under the Biden administration, smugglers apprehended by law enforcement are being routinely released into U.S. communities, providing further incentive and “business protection” for smuggling activity.

In April, the clothing boutique store that Hubble owns was broken into by smugglers who had been recently released from a nearby jail. They stole money and merchandise—a loss her small business, hit hard during the COVID-19 pandemic, could not afford.

The fact that the community was put in danger by the release of the smugglers from jail is an inescapable conclusion for Hubble. “We’re an hour from [any major city],” she said. “Where are they going to go?”

Static check points maintained by Border Patrol have been abandoned since the Biden administration took office. In an interview, a southwestern border sheriff remarked to me that these stations often stop human trafficking and drug smuggling operations that have crossed the U.S.-Mexican border, however:

If there’s nobody to deter [smuggling] … [a smuggler is] going to [bring] anything across, whether it’s illegal people or drugs … without any kind of opposition. And of course, once it comes across the line, it just filters right up through the United States of America and it’s everywhere.

For many Americans in southwestern border communities, it is obvious the Biden administration does not take U.S. border security seriously. After months of crisis, neither Biden nor Vice President Kamala Harris has visited to assess costs on border communities that their policies have imposed, by freely opening the door to Mexican organized crime. But there are serious consequences to the cartel’s easy path to the U.S., for both the trafficked and the traffickers.

For illegal immigrants who want to illegally enter the U.S., working with the drug cartel is their only option. Sadly, illegally entering into the U.S. is not the simple solution to a better life that they have been led to believe.

As Hubble remarked to me, “Coyotes see they can make a lot of money off [of smuggling people]. And a lot of these coyotes never even take [illegal immigrants] to their destination—they get thrown back into human smuggling rings. It’s a huge mess.”

Once inside the U.S., some illegal immigrants fall prey to kidnapping: Coyotes will demand additional payment from family members while holding the illegal immigrant in a “drop house” against his or her will until the ransom is paid.

For illegal immigrants who attempt to enter the U.S. without going through the cartels, the danger is significant. Guerrero warns: “People who try to freelance their way across [cross illegally without the help of the cartels] … get caught by the [cartel] network. It does not play out well for them. They are made examples of and then [their bodies] are sent back to wherever they came from.”

Guerrero described the Huachuca Mountains as a cartel “drug corridor” where illegal immigrants are used as “mules” to carry black tar heroin “placed around their neck—a pre-packaged, small, little chest harness kind of thing. And they’re told, ‘You will guard this with your life—if you lose this thing en route, you will pay with your life.’ These are small, but very, very high-potent drugs.”

Hubble expressed frustration over the conditions of the illegal immigrants who have entered their communities. “[The administration is] inviting them over, and they created the problem. I try to tell people the Border Patrol stations are full; they are buying hotel rooms for them now with our tax dollars. They’re giving them money, plane tickets—but there are a lot who don’t get anything.”

The Biden administration’s optimistic talk about a humanely administered immigration system is not the reality at the U.S.-Mexican border. Rather, the administration’s “system” is leading to brutal criminality and inhumane neglect.

“And as much as the Biden administration is letting us down,” Hubble stressed, “they’re letting [the illegal immigrants] down as well. In Gila Bend, they’re sleeping out in the parks. So, where’s their fruit baskets, their little apartment key that Biden has promised them all? ‘Come over here, we’ll take care of you,’ [Biden says,] but there are too many to take care of.”