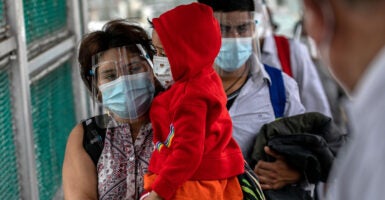 The number of children coming to the U.S. border without parents is now more than 430 a day. Experts predict more than 100,000 by year's end. Pictured: A Honduran mother carries her son, 4, across the U.S.-Mexico border as part of a group of asylum-seekers on Feb. 25, 2021. (Photo: John Moore/Getty Images)

Now, I’m watching that misguided compassion wreak havoc on the lives of thousands of children illegally crossing our southern border as the Biden administration guts the successful immigration policies of the last four years.

Certainly, many average Americans who support more open immigration policies and amnesty programs do it out of a sense of compassion, hoping that people less fortunate than they are will be able to come to America to make better lives for themselves and their families.

But I can’t assume the same good intentions from our elected officials. Those in government know full well the tragic consequences of opening our borders. Rather than being motivated by compassion, they seek to gain power, and they’re willing to sacrifice some of the most vulnerable people to do it.

The Biden administration’s recent open-borders immigration policy and talk of potential amnesty has predictably resulted in a dramatic rise in unaccompanied children risking their lives to enter the United States across our southern border. The number of children coming without parents is now more than 430 a day, with immigration experts predicting an influx of more than 100,000 unaccompanied children by the end of 2021.

Parents are paying murderous drug cartels thousands of dollars to smuggle their children across the border. Some children are traveling across two or three countries to get here. Some have died during the rough and dangerous crossing, others have been abused by the smugglers, and some have been sold into human trafficking networks.

We’ve also seen children being “rented” and “recycled” across the border several times to help adult males gain easier entry into the U.S. by claiming that the children are their own.

Once in this country, children are placed in cramped facilities until the government can connect them with relatives or caretakers already here. The Associated Press recently reported on one tent facility in Texas where hundreds of children have been so packed together that it’s impossible to practice social distancing.

Many are sleeping on the floor because there aren’t enough mats. Some have had to wait five days or more to shower, and soap isn’t always available. Other reports are that the administration won’t allow media inside some facilities to inspect the conditions, citing the pandemic as an excuse.

This raises so many other questions that need answering: If detention facilities are already running out of bedspace, how is the government quarantining COVID-19-positive children before releasing them into the population?

What kind of strain is this sudden influx placing on local social services agencies that are already overburdened because millions of Americans are out of work?

And at a time when educational resources are already being stretched thin with class sizes cut in half or children are studying from home, how are our schools handling the influx?

The Biden administration has created a border crisis that experts clearly warned would happen.

The president’s executive orders have directed federal agencies to disregard U.S. law. The administration tore up agreements with Central American nations that had helped stop the uncontrolled flow of migrants. It abandoned the effective “Remain in Mexico” policy for asylum-seekers that was critical to reducing fraudulent asylum claims. It has nearly eliminated Immigration and Customs Enforcement’s ability to deport those here illegally.

And rather than securing the border, the administration is sending processors to the border to move illegal immigrants into the U.S. interior as quickly as possible.

What’s the ultimate goal of this explosion of illegal immigrants into the United States? It certainly can’t be for the alleged humanitarian reasons we keep hearing about from our politicians.

As the numbers rushing the border continue to grow, violent drug cartels are growing richer from smuggling fees, more children are being handed over to the custody of violent criminals, and kids are being stuffed into cramped holding facilities. That’s no one’s definition of humanitarian.

Yet, it’s no coincidence that at the same time the administration and its allies in Congress are promoting these open-border policies and proposing giving millions of illegal immigrants amnesty, they’re also pushing HR 1, a bill that would diminish safeguards that prevent noncitizens from illegally registering and voting.

The left is working to create voters out of millions of illegal immigrants—not to help those immigrants, not to make America stronger, but merely to cement its own power.

And politicians won’t let the children stand in their way, even if it means putting hundreds of them in danger each day.

These children, our children—all children—deserve better than this.