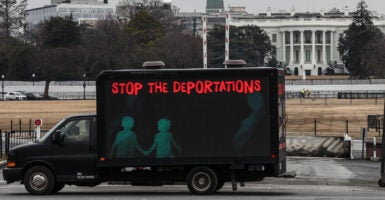 President Joe Biden is promoting an immigration bill that could grant amnesty to up to 20 million illegal immigrants.

“The Biden administration, in coordination with Democrats on the Hill, introduced legislation that would give citizenship to 10-20 million illegal immigrants,” Jessica Anderson, executive director of Heritage Action for America, said in a public statement.

The Biden White House released an outline of the amnesty legislation on his first day in office.

In what could be a deal-killer for gaining any Republican support, the legislation doesn’t include proposals for increased border security, according to The Associated Press. This comes as Biden has rolled back several major border security measures through executive action.

The proposal comes after Biden ordered federal agencies to stop construction of a southern border wall and signed an executive order to strengthen the Deferred Action for Childhood Arrivals policy that gives legal status to illegal immigrants that arrived as children. A federal judge issued a temporary injunction order to Biden’s executive action ordering a halt to deporations.

“Biden has already signed a flurry of executive orders on immigration that have weakened the rule of law and triggered a surge of illegal migration toward the U.S.-Mexico border,” Heritage Action’s Anderson said, adding:

This latest move would only further harm American workers already struggling from our health and economic national crises caused by the ongoing pandemic and our government’s response. This new immigration bill will damage America’s safety, weaken our economy, and endanger our freedoms.

A version of the Biden-backed immigration bill is sponsored by Sen. Bob Menendez, D-N.J., in the Senate and Rep. Linda Sanchez, D-Calif., in the House.

“Immigrants contribute greatly to our country and society; they own businesses, pay taxes and teach our children, they are our coworkers, neighbors and friends,” Menendez said in a written statement. “We have an historic opportunity to finally enact bold immigration reform that leaves no one behind, addresses root causes of migration, and safeguards our country’s national security.”

Here are six big points from the bill.

The legislation calls for an eight-year path to U.S. citizenship for illegal immigrants that would include going through a process of becoming a legal resident.

Earlier this week, the president said he is willing to compromise, but seemed to say the bill would have to have a pathway to citizenship.

“There’s things that I would deal by itself, but not at the expense of saying, ‘I’m never going to do the other.’ There is a reasonable path to citizenship,” Biden said Tuesday during a CNN “town hall” forum in Milwaukee.

Similar proposals have failed in Congress, whether under the control of Democrats or Republicans, and most recently in 2013. The Biden-backed legislation is more lenient than the proposal in 2013 that stretched the pathway to citizenship over 13 years.

To be covered by the bill, an immigrant would have had to be in the United States before Jan. 1, 2021. That would include illegal immigrants who rushed the border after the 2020 election, up until 20 days before Biden’s inauguration as president.

After five years of temporary legal status, an illegal immigrant would have to wait another three years to get citizenship.

“The Biden administration and others on Capitol Hill are putting illegal immigrants above the American people—the people whose very interests they were elected to represent,” they said, adding:

We have seen it time and again—amnesty only begets more illegal immigration. Rather than dealing with the loopholes incentivizing illegal immigration, or pursuing further security improvements on our southern border, this administration is choosing to reward law-breaking in what appears to be an effort to reshape the American electorate in ways that benefit the radical left and its agenda.

Worse still, this scheme is being carried out on the backs not just of American citizens, but thousands of migrant children as well, who have increasingly become pawns used by smugglers and human traffickers to exploit loopholes in our system and funnel hundreds of thousands of migrants to the U.S. southern border.

2. Exemptions for ‘Dreamers’ and Others

In the Biden plan, an exception for the waiting process for citizenship would be created for illegal immigrants who arrived in the United States as children—those amnesty supporters call “Dreamers.”

Less sweeping measures already have been proposed, such as the DREAM Act sponsored by Sen. Lindsey Graham, R-S.C. and Senate Majority Whip Richard Durbin, D-Ill. The Graham-Durbin bill would bestow legal status on illegal immigrants brought to the United States when they were minors.

Other exceptions in the path to citizenship would be farmworkers and those in the United States for humanitarian relief.

To be eligible for the bill’s legalization plan, immigrants must have been in the country before Jan. 1.

Biden, through executive action, had government agencies change references from “alien” to “noncitizen” despite the wording of current U.S. law.

In what is a mostly linguistic change to a more politically correct term, the legislation would codify the Biden language by eliminating references in the law to “alien” for an illegal or legal immigrant, and referring to such a person only as “noncitizen.”

This exemption from per-country caps would include spouses, “partners,” and children under 21.

“The bill further supports familes by more explicitly including permanent partnerships and eliminating discrimination facing LGBTQ+ families,” the White House says in a fact sheet on the plan.

The legislation would boost funding for U.S. Citizenship and Immigration Services to reduce a backlog of asylum applications.

The bill would eliminate a prohibition on returning to the United States for an illegal immigrant who was previously here in violation of immigration laws.

It would boost funding for immigration judges while also paying for more lawyers for illegal immigrants who attend hearings.

The bill also would increase the number of visas granted annually to foreigners from 55,000 to 80,000. It would codify Biden’s executive action to scrap the Trump administration’s “extreme vetting” policy, which blocked immigration from some majority-Muslim countries that also are failed states.

“The bill includes the NO BAN Act that prohibits discrimination based on religion and limits presidential authority to issue future bans,” the White House says in its description of the plan.

The legislation calls for $4 billion for Central America, and for action against smugglers, narcotics, and trafficking networks. The bill would require Central American countries to establish some refugee processing centers in their own countries.

Biden has said he supports ending the Trump administration’s “Remain in Mexico” policy, which required refugees to be processed in Mexico—as the first safe country they reach—if they are fleeing danger in a Central American country.

The bill codifies and funds the president’s $4 billion four-year inter-agency plan to address the underlying causes of migration in the region, including by increasing assistance to El Salvador, Guatemala, and Honduras, conditioned on their ability to reduce the endemic corruption, violence, and poverty that causes people to flee their home countries.

It also creates safe and legal channels for people to seek protection, including by establishing Designated Processing Centers throughout Central America to register and process displaced persons for refugee resettlement and other lawful migration avenues—either to the United States or other partner countries.