What This Arizona Sheriff Sees While Border Crisis Worsens 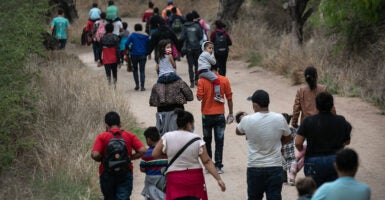 A border sheriff in Arizona says his county has hit a crisis point with the surge of illegal immigrants crossing into the U.S. from Mexico.

“We went from a year ago manageable [and] calm to unmanageable chaos and crisis,” Cochise County Sheriff Mark Dannels told The Daily Signal in a phone interview Wednesday.

“Checkpoints are all down,” said Dannels, whose county is about two hours from Tucson by car. “There’s no more checkpoints [for illegal immigrants] in our county. Our Border Patrol station has become a care center for the agents who run the checkpoints … so we’ve lost agents in the field.”

After being sworn in Jan. 20, President Joe Biden signed an executive order halting construction of President Donald Trump’s wall along the U.S.-Mexico border.

“When President Biden took office, within hours of taking office, he had the executive orders and [in] one of them he declared the southwest border not an emergency,” Dannels recalled.

“They stopped the radio sensors and technology lighting. And most of all, it sent a message … that the border is open,” he said, adding: “That’s causing us great grief.”

In an interview Wednesday on “The Daily Signal Podcast,” Mark Morgan, acting commissioner of U.S. Customs and Border Protection in the Trump administration, said statistics show illegal crossings at the border have exploded.

“Last month, in the month of February, they saw over 100,000 apprehensions of people trying to illegally enter the border,” said Morgan, currently a visiting fellow at The Heritage Foundation.

Dannels, the Cochise County sheriff, said his community is concerned about what is happening along the 83 miles the county shares with Mexico.

“They’re in unrest with the fact that they don’t know what’s going on there now …  with the erosion of prevention and enforcement programs,” he said.

Dannels, first elected sheriff as a Republican in 2012 and reelected in 2016 and 2020, has served in law enforcement for 36 years.

“My days are spent addressing community concerns, talking to media now with the national hype [that] just happened because of the decision, and last but not least, is overseeing an operation that has increased immigration [and] border issues,” Dannels told The Daily Signal.

He said chaos at the border also has brought more drugs and crime to Cochise County.

“There are more calls of [illegal immigrants trespassing] on private properties,” Dannels said. “You name it, I mean, drug smuggling is up.  …  We were 20 months without a drug load [moving] in this county, and that’s something which is very disturbing to me on the public safety side.”

What is happening is a marked change from when Trump was in office, the sheriff said.

“So we’re just more guarded,” Dannels said. “We’re more focused on the fact that we’re dealing with border crimes more than we have. A year ago, we didn’t have this.”