With Work Stopped, 7 Things I Saw at Border Wall 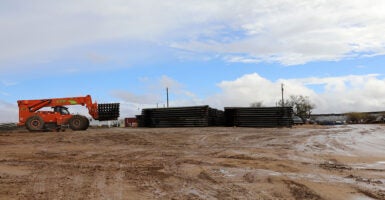 Workers move sections of the border wall in Sasabe, Arizona, on Jan. 21, the day after President Joe Biden's executive action halting construction of the wall along the U.S.-Mexico border within seven days. (Photo: Micah Garen/Getty Images)

NOGALES, Arizona—Construction of the wall along the U.S.-Mexico border has stopped under President Joe Biden’s order issued Jan. 20, the day of his inauguration.

The Daily Signal traveled to a portion of the southern border Jan. 28 and 29 with nine House Republicans, including Rep. Andy Biggs of Arizona, chairman of the House Freedom Caucus.

The congressional delegation visited stretches along the border wall in Nogales as well as in Cochise County, Arizona, where construction of the wall not only has ended but equipment sits unused.

Here are seven things I saw while representing The Daily Signal on the trip.

In Cochise County, tons of construction material sat unused since construction of the border wall ended following Biden’s order on his first day in office.

Biggs, the Arizona congressman, told The Daily Signal that the end of construction is bad news for Arizona.

“The 30-foot fence that we have been needing so long out here, that’s not going to happen,” Biggs said. “And what will happen is a continuation of that smuggling corridor that the Biden administration is tacitly permitting.”

2. Gaps in the border wall.

Although construction workers had completed some stretches of the border wall, gaps appear in some sections.

Officials planned to put a metal gate there for emergency services and maintenance in a gap at Sasabe, but since the Biden administration ended all construction, only barbed wire fills it.

In some stretches, an observer can see how the old structure compares with the new wall erected during the Trump administration.

The photos above show the old, 10-foot-high structure versus the new, 30-foot wall.

4. Schools locked down because of drug cartels.

Some schools in the area go on regular lockdown because of drug cartels that cross the border from Mexico into Arizona.

One such school is Palominas Elementary School in Cochise County, which law enforcement officers say is locked down regularly because drug cartels run their loads adjacent to school property.

5. Ranchers worry about their safety.

Ranchers with land along the U.S.-Mexico border say they are concerned for their personal safety and the safety of their property.

Dan Bell is a third-generation rancher whose ZZ Cattle Corp. is a family-held corporation.

Bell says he worries about safety on his property with the end of construction of the border wall.

“What we’re seeing right now with this pause that was put in place—and we’re hoping that the construction can continue—we have a lot of areas that have been left open,” Bell said, adding:

We have a lot of gaps that need to be fixed. There’s a big, 4- to 5-mile gap between me and my neighbor right now that is going to end up as a corridor …  for human trafficking as well as drug trafficking.

We need to make sure that we continue the business at hand …  and just continue to secure the border and have the tools necessary to help prevent illegal border crossing.

On some stretches, observers can see clothes that were snagged and stuck to the wall as migrants scaled it and climbed down the other side to cross the border illegally.

Sgt. Tim Williams, a sheriff’s deputy with Cochise County, says the safety of his community is at stake with Biden’s halt to wall construction.

“We’re standing in one of the areas that has stopped, and it is one of the biggest smuggling corridors that we have in Cochise County,” Williams said, adding:

And the infrastructure on the roadway was put in, but the fence has been initially just stopped at this point.

Now this is going to allow the illegal immigrants to come across the border, get onto that roadway that was built, and get into the United States even easier than what it was before.

Besides Biggs, others in the congressional delegation to the border included fellow House Republicans Glenn Grothman of Wisconsin, Warren Davidson of Ohio, Bob Gibbs of Ohio, Andrew Clyde of Georgia, Bob Good of Virginia, Lauren Boebert of Colorado, Matt Rosendale of Montana, and Barry Moore of Alabama.