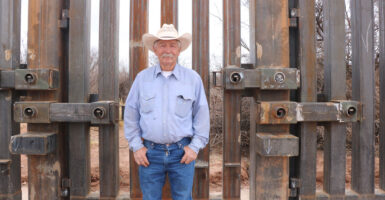 John Ladd, pictured here, is a rancher whose Arizona property runs along the border wall, and is a major corridor for illegal immigration and drug smuggling. (Photo: Shea Garrison)

The flood of illegal immigrants from across the southern border is only one of many threats to America’s national security that have increased recently, thanks to the Biden administration’s contempt for the rule of law.

The administration’s actions at the border have left federal and local law enforcement, large-scale ranchers and small businesses, and families and homeowners bewildered—wondering why their government would leave them so vulnerable—in what was described by Arizona rancher John Ladd as the worst criminal activity at the border that he has ever seen.

A fourth-generation rancher, Ladd told me that the full truth about President Joe Biden’s border policies is rarely reported. “The caliber of people that are coming now are criminals, what we are getting are not maids and gardeners, these people are working for the cartel,” he said in an interview with me.

Ladd has been reliably informed by contacts with multiple law enforcement agencies, including the Southeastern Arizona Border Region Enforcement team of the Cochise County Sheriff’s Office. “The illegals crossing now are in full camo. They pay $6,000 to get here, which only VIPs working with the cartel can afford … We got bad guys coming here.”

Law enforcement of all levels in areas around the border have been directed to release illegal immigrants seeking asylum and human traffickers into American communities under the Biden administration.

One southwestern border sheriff, who has a contract with the U.S. Marshals Service to hold illegal immigrants who are criminals in his jail for an indeterminate amount of time, told me, “The U.S. marshals usually come to pick them up at some point, but not this time. We’ve been told to give them a bus ticket to wherever they choose in the U.S. and let them go.”

When asked if the destination communities to which the criminal illegal immigrants are traveling must be notified, he solemnly shakes his head and says, “No.”

Another law enforcement officer I spoke with—a veteran Department of Homeland Security officer with border experience—remarked that under the Biden administration, felons who cross the border are no longer detained.

In a particular instance, an aggravated felon crossed into the U.S. through Mexico with a substantial weight of opioids. Typically, DHS would issue a detainer notice for the felon, who would be taken into custody as soon as he was released from court. However, under the Biden administration, detainers are not allowed, and the felon was released into the U.S.

This felon was determined to be “other than Mexican,” or “OTM,” a term used for those crossing the U.S.-Mexican border whose country of origin is not Mexico. Indeed, people from all over are taking advantage of the porous southern border, exposing the U.S. to dangerous individuals from around the world.

Daniel Cantu, a retired Border Patrol agent, confirms that under the new administration, if illegal felons are not on a terrorist list, law enforcement agents have been told to release them into the U.S.

The Biden administration, to the bewilderment of law-abiding, taxpaying Americans, working hard to support their families, has not only opened U.S. borders to asylum-seekers, but also to criminals. At what cost to America’s communities, businesses, and national security? The DHS agent summed up the current crisis at the southern border, saying, “It is literally the Wild West.”

Ladd’s property is on the Arizona border, which he told me is a “huge corridor” for human and drug smuggling. “This is where they load up … they take all the seats out of small cars, put eight people in there, they lay on top of each other. It’s amazing. And most of the drivers are American citizens from Phoenix and Tucson … who are coordinating all the way through the cartel.”

Ladd remarks that during the Trump administration, American citizens were prosecuted for being human traffickers, but since Biden took office, Border Patrol officers are letting traffickers go.

“[Former President Donald] Trump had pretty much shut down the flow [of illegals immigrants],” Ladd adds. “It was almost nonexistent the four years of Trump, but now it’s started up again … They’re catching 50 a day, just on my property.”

During my visit to the border, Stephanie Hubbell arrived at her clothing boutique in the small near-border town of Sonoita, Arizona, on the morning of April 3 to find that human smugglers (U.S. citizens) had broken in, stolen money and merchandise, and left used drug paraphernalia behind. The traffickers had been recently released from a nearby jail.

“For a small business like me (which suffered greatly during COVID), this was a hard hit” Hubbell told me.

The next day, another trafficker “coming off” of fentanyl walked into her store, saying he had just been released from jail and needed to call his mother in Phoenix for a ride.

“We’ve lived in this area for 17 years,” Hubbell said. “But I’ve never seen border issues like this, [where] Border Patrol release [traffickers] that are smuggling illegals … It’s a shame that Washington doesn’t want to admit there is even a problem.”

She continues, “The ‘coyotes’ see they can make a lot of money off [smuggling people] because they have got the OK from Biden—he has invited people in to seek asylum.”

Hubbell remarks that before the new administration, law enforcement took smugglers to a Tucson center to be prosecuted, which removed them from her small rural town. “They’re getting released into our community, that’s never happened before,” she said. “[The] one that broke into my store had a long list of criminal activity … We’re an hour from [any major city]—where are they going to go?”

The pervasive feeling of law enforcement, ranchers, and small business owners from Texas to New Mexico to across to Arizona is that they have been forced into an adversarial role with the self-indulgent political maneuvers of the current administration. Frustration, anger, and hopelessness are the emotions expressed over the blatant disregard this administration has for the well-being of its own citizens.

“It’s U.S. territory,” said the DHS agent I spoke with. “Why aren’t we allowed to defend it?”

This piece was updated to correct a detail about John Ladd.