I Went to the March for Our Lives Protest. Here Are My 7 Takeaways.

People from around the country came to Washington, D.C., to protest in favor of gun control. (Photo: Karen Schiely/TNS/Newscom)

Tens of thousands of protesters—and maybe more—gathered in Washington, D.C., and around the country Saturday to protest in favor of gun control.

The demonstrations, called the March for Our Lives, featured children calling for an end to gun violence and ultimately stricter gun control laws.

The Daily Signal hit the streets to observe the event and see what it was all about.

The following are my observations from walking through the crowd and assessing its common themes.

It may seem painfully obvious, but it is worth noting the march in Washington was clearly a left-wing protest.

As Julie Gunlock at The Federalist noted, some parents were led to believe that the March 14 National School Walkout would be about memorializing victims of the Parkland shooting. It wasn’t.

This goal was even more obvious at the March for Our Lives.

Gun control is certainly associated with the modern left, but it’s clear from observing the protesters that many were involved with other left-wing movements.

The pink hats from the 2017 Women’s March made a widespread reappearance, as did numerous anti-Trump or generally anti-Republican signs. 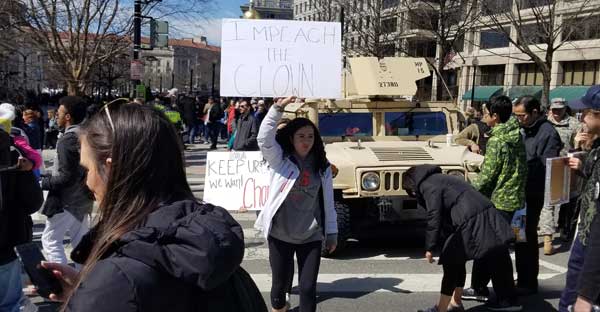 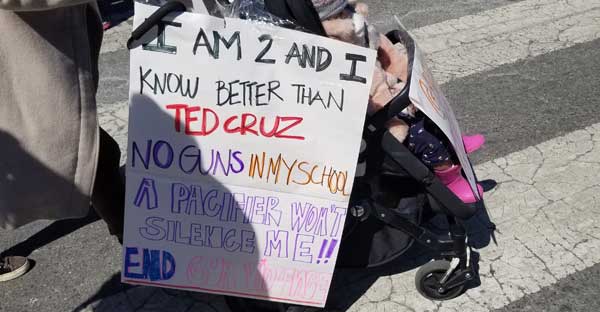 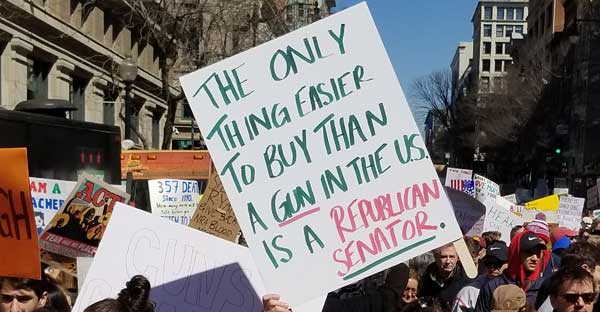 The crowd was certainly not a representative slice of what the country as a whole thinks about gun control, nor did it represent the opinions of most young Americans.

As The Daily Signal recently reported, polls show that millennials are no more in favor of gun control than their parents or grandparents.

This was certainly one of the largest gatherings I’ve seen in Washington, D.C., and one of the most highly organized.

Clearly, staff from a huge number of activist pro-gun control organizations showed up, as would be expected, but there were also people on almost every street corner trying to register people to vote.

People carried signs from gun control groups, such as the Brady Campaign to Prevent Gun Violence and Moms Demand Action for Gun Sense in America. 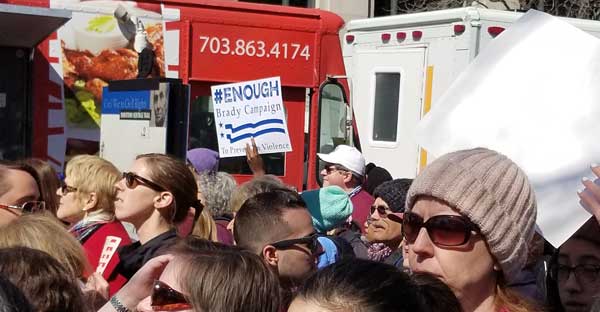 Undoubtedly, many people from around the country came to the protest out of a sincere belief that they were making a positive difference to end violence, but there’s also no doubt that a huge amount of professional organization and money went into this march.

A series of Hollywood celebrities funded the march, including Oprah Winfrey, George Clooney, Steven Spielberg, and others.

There were certainly many children present, but there’s no way they could have put this all together on their own. Outside help and organization was apparent.

The March for Our Lives protesters were seemingly not fans of prayer. 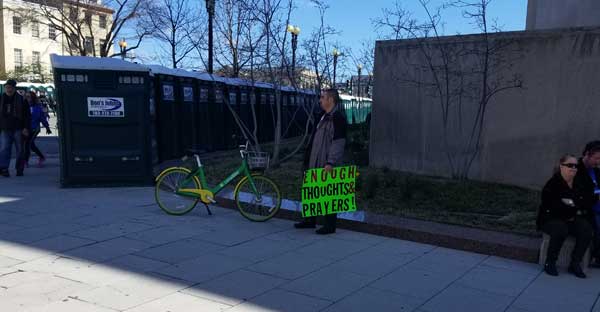 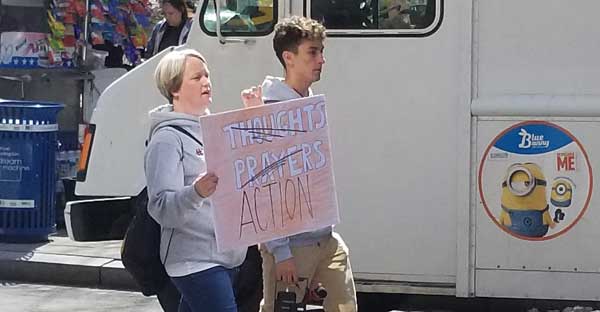 In the wake of the Parkland shooting, liberal calls to action have centered on banning guns. But such calls have neglected other serious issues relating to school shootings that have nothing to do with firearms, including the way America deals with the mentally ill.

Another issue is how federal and local policies have let dangerous people, like the Parkland shooter, slip through the cracks. Often the problem is not with a lack of laws, but a failure to enforce the laws that already exist.

There are a number of serious proposals that would tackle the issue of school safety without confiscating guns or seriously curtailing constitutional rights. See, for instance, The Heritage Foundation’s School Safety Initiative.

But this doesn’t fit the narrative of those leading the March for Our Lives protest, who from the outset have been committed to gun control.

4) Those Who Disagree Viewed as Complicit in Murder

While the name March for Our Lives may be a coincidence, it certainly sounds similar to the March for Life, a pro-life rally that takes place each January in Washington, D.C.

Numerous signs claimed that those who back gun rights don’t care about the lives of children or are responsible for deaths. 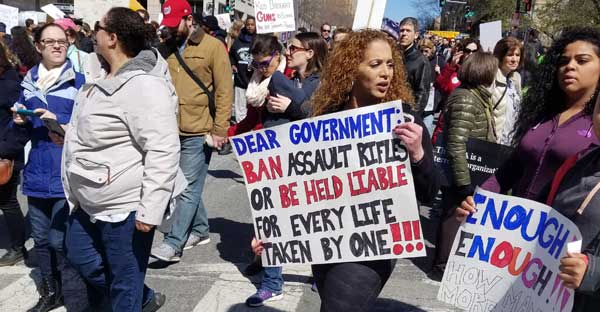 Others specifically linked the pro-abortion and gun control movements. 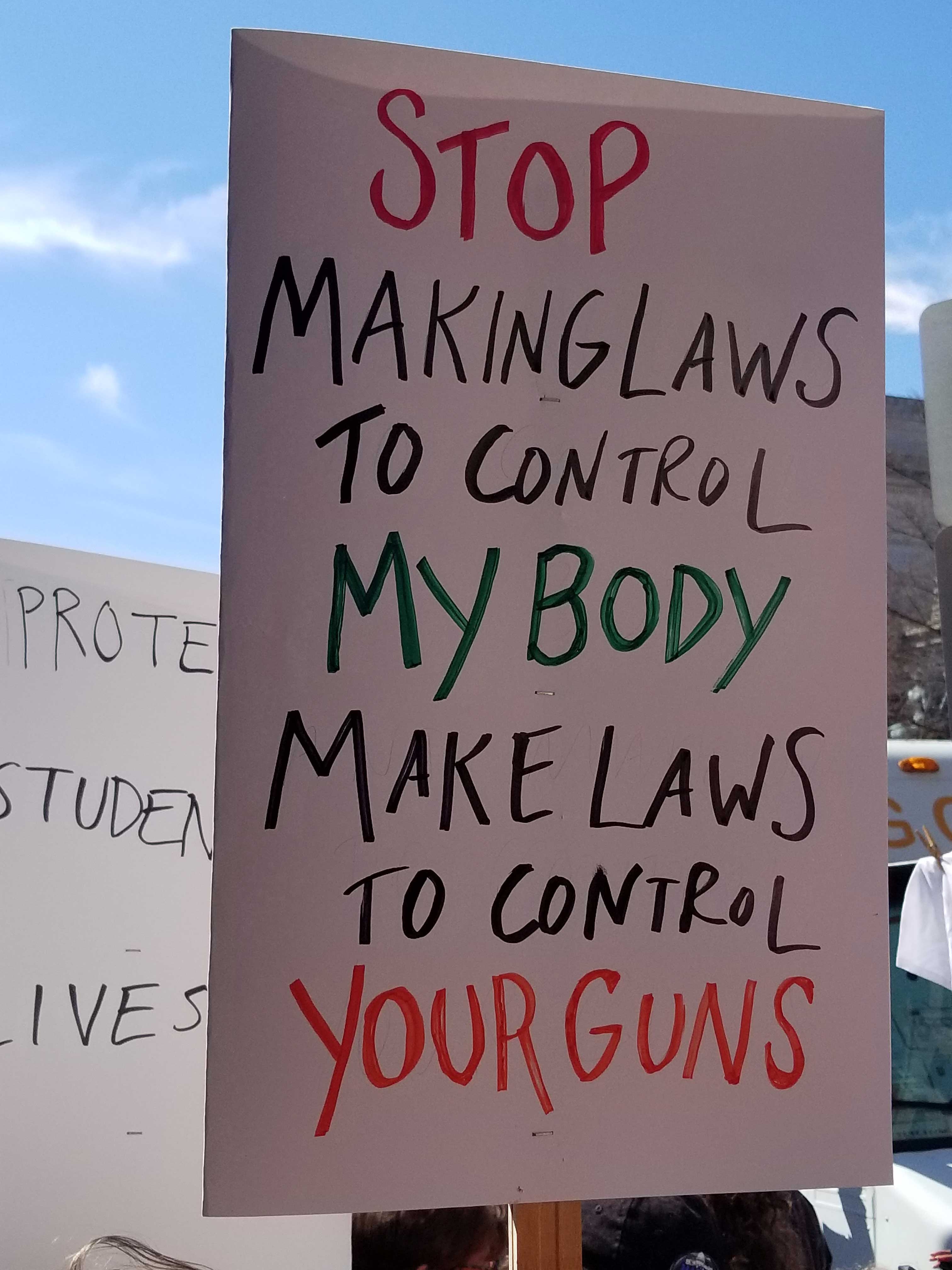 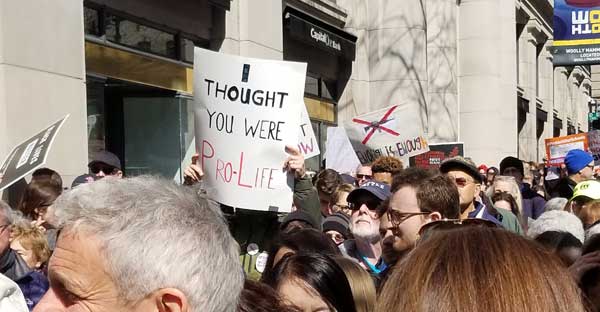 And many condemned the National Rifle Association for having blood on its hands, or insinuated that the pro-gun organization has bought off politicians to support its policy interests.

One protester even compared the NRA to ISIS. 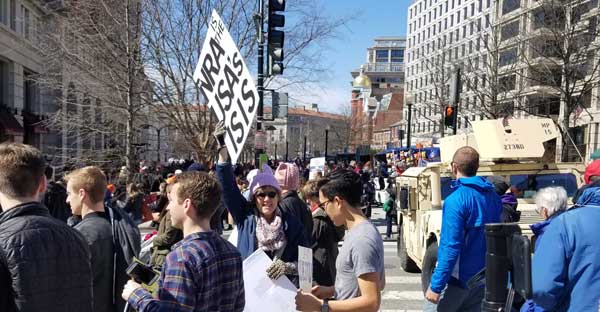 While gun control advocates have generally been cautious about outright attacking the Second Amendment, many of the protesters had no such reservations. 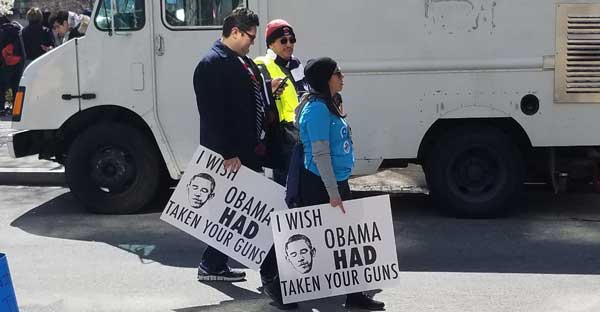 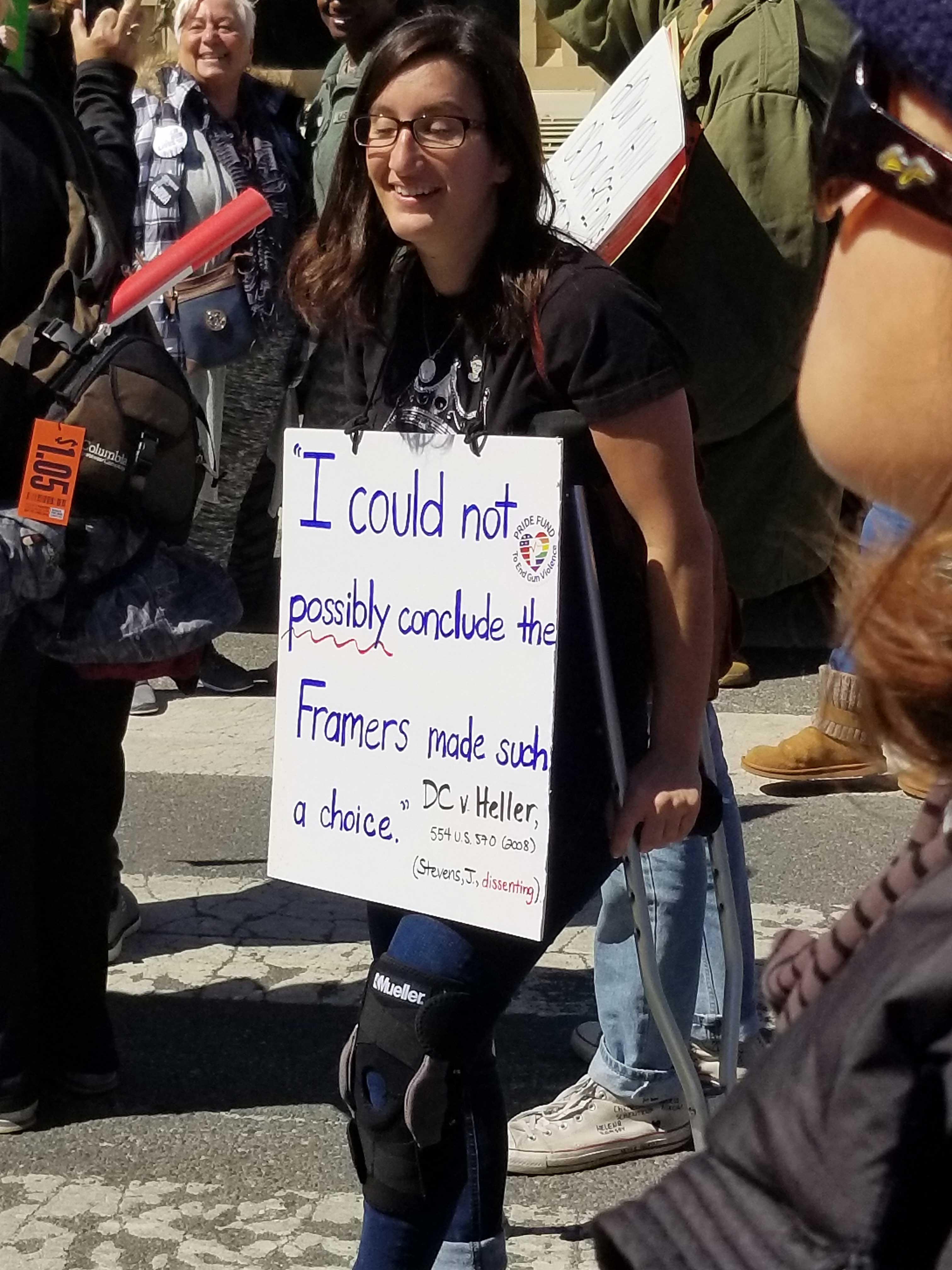 Many held signs saying essentially that the Second Amendment is irrelevant because the Founders wrote it in the 18th century.

But following that logic, one would have to question all the other provisions of the Constitution that were written by the Founding generation, including the First Amendment.

After all, the internet didn’t exist in the 18th century. Does this mean that free speech on the internet shouldn’t be protected?

And what about the constitutionally protected right to assembly, also guaranteed by the decidedly 18th-century First Amendment? These protesters seem to at least value that piece of constitutional inheritance.

It was clear that while many of the protesters were articulate in defending their views, they were misinformed about some of the facts surrounding the gun debate.

For instance, in an interview with The Daily Signal’s Genevieve Wood, one marcher repeated the thoroughly debunked claim that there had been 18 school shootings this year prior to Parkland.

This shocking number, repeated by Obama and some major media outlets, was a bogus stat cooked up by a pro-gun control group.

Almost none of the incidents used in that statistic can be described as anything like a school shooting—several were suicides or random shootings that simply took place near a school campus.

The Washington Post even called the statistic “flat wrong.”

There were other examples of misinformation as well, including one sign that called for a ban on “automatic weapons,” which have actually been banned since 1934.

Unfortunately, Americans have received a huge amount of disinformation about guns and gun control, much of it perpetuated by the media.

Read my piece about the six common media myths about gun control.

The March for Our Lives crowd may have wanted to disarm Americans, but the event hardly took place in a gun-free zone.

Armed police covered the streets to ensure the safety of those gathering in the nation’s capital. In fact, there were even armored military vehicles embedded within groups of protesters. 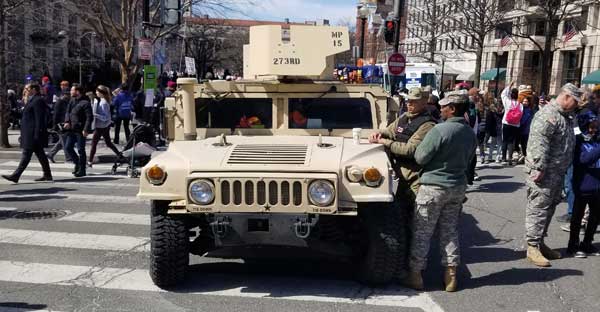 Some signs essentially called for only the government to have firearms. 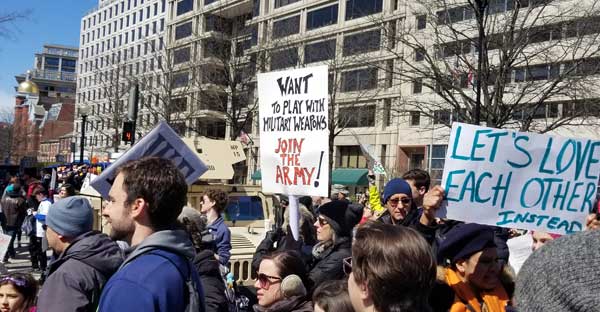 Of course, the idea that only the government and the military should have access to firearms would not have sat well with the Founders. They feared a government powerful enough to disarm the citizenry and a standing army. That’s why we have the Second Amendment.