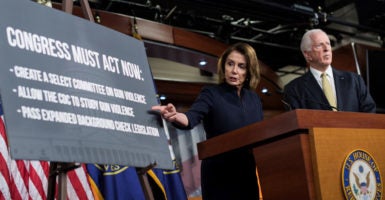 The latest mass shooting, this time at a Florida high school, was one of the deadliest school shootings since the Columbine massacre in 1999.

So far, there have been 17 confirmed deaths in the shooting at Marjory Stoneman Douglas High School in Parkland, Florida, and the alleged shooter is in custody.

Americans are understandably searching for answers to stem this terrible epidemic.

Unfortunately, as always, many jump immediately to the conclusion that guns and protection of gun rights are what’s fueling the recurrence of these crimes. Some suggested that any opposition to gun control legislation is outright immoral.

We are grieving with Parkland. But we are not powerless. Caring for our kids is our first job. And until we can honestly say that we're doing enough to keep them safe from harm, including long overdue, common-sense gun safety laws that most Americans want, then we have to change.

From Parkland, a student there: “We’re children, you guys are, like, the adults. Take action, work together, come over your politics, and get something done.” We need more than the usual “thoughts and prayers”. Act! No tension between 2nd Amendment and sane gun safety measures

We have to elect candidates that are not funded by the NRA in November. We have an opportunity to elect candidates who won’t allow kids to go to school and get shot. It is disgusting how many times this has happened and Republicans do nothing. You all have blood on your hands.

But the often sincere and certainly passionate claims made by those calling for gun control frequently don’t add up.

As columnist David French wrote of the recurring shootings in a brilliant column for National Review, “It’s horrifying, and governmental solutions are hard to find. Twitter’s fondest wishes to the contrary, the unique characteristics of mass shootings mean that they often escape the reach of public policy.”

After the Parkland shooting, a number of old and new myths about the Second Amendment and gun control became media narratives. Here are just a few of the more common ones.

While school shootings are a serious problem, there have been frequent exaggerations about just how common they are.

One story that has gained widespread traction is that the Parkland shooting is the 18th school shooting since the beginning of 2018. This statistic was originally cooked up by Everytown for Gun Safety, a pro-gun control nonprofit.

Yet, as The Daily Wire noted, this statistic is highly misleading.

Several of these “shootings” were individuals committing suicide on campus and many others were of stray bullets passing through classroom walls with no injuries taking place. In only a few cases were people other than the shooter actually harmed.

“[O]f the 17 ‘school shootings’ before Wednesday’s shooting; three students died; roughly 30-35 were injured,” according to The Daily Wire.

Even The Washington Post said the Everytown number was “a horrifying statistic. And it is wrong.”

“Everytown has long inflated its total by including incidents of gunfire that are not really school shootings,” according to The Washington Post.

2. Trump Signed a Bill That Makes It Easier for Mentally Ill People to Get Guns

This story spread rapidly after President Donald Trump tweeted out that the Parkland shooter was “mentally disturbed” and that more vigilance was necessary to stop these people before they engage in mass killings.

Immediately, many journalists suggested that Trump had made it easier for disturbed people to get guns.

However, this stretched the truth.

Last year, Trump and Congress used the Congressional Review Act to overturn an Obama-era regulation that among other things could prevent those who received disability payments from Social Security from purchasing firearms.

The rule brought up serious charges that it was not just a violation of the Second Amendment, but Fourth Amendment due process rights.

“No administrative process and no administrative law judge should be able to take away a constitutional right,” Heritage Foundation senior fellow Hans von Spakovsky said when the rule was repealed. “This should exclusively be a regular court of law to determine if someone is disabled enough to pose a hazard with a gun, not a federal bureaucrat.”

As Reason editor Scott Shackford wrote, the rule did not specifically prevent mentally ill people from getting guns. Instead, it threw a wide, potentially unconstitutional net over people who may be no threat to themselves or others.

“[T]he regulation was opposed not just by National Rifle Association (NRA) but by several mental health and disability groups and by the American Civil Liberties Union,” Shackford wrote.

One of the most frequent and persistent myths about guns is that the increase of guns in society leads to more crimes or violence in general. However, this hasn’t been the case. Studies demonstrate that gun control laws have not had a noticeable impact in reducing murder rates and violent crime.

I wrote in October:

As numerous studies have shown, gun ownership is not necessarily connected to crime rates, and may make crime go down. A 2016 report from the National Rifle Association Institute for Legislative Action noted that:

There is simply no evidence that gun owners are more likely to commit crimes, violent or otherwise.

Obama doubled down in 2016, saying, “We flood communities with so many guns that it is easier for a teenager to buy a Glock than get his hands on a computer or even a book.”

Even The Washington Post fact-checkers cast doubt on this wild claim.

Sean Davis at The Federalist explained the wide gap between the effort required to buy simple produce and pretty much any firearm. Davis Wrote:

There are no federal laws requiring onion dealers to register with the federal government prior to selling onions. There are no state laws requiring that you apply for and receive an onion purchase permit, complete with background check, prior to purchasing an onion. There are no onion waiting periods or limits on how many onions you can purchase within a certain period of time. Nor are there, to my knowledge, any state or local laws prohibiting the possession of onions in schools or government buildings.

The fact is, there are numerous hurdles to gun ownership. It’s not something that can be done on an immediate whim.

5. Gun Control Works in Other Countries

A frequent claim by gun control advocates is that other countries have stemmed gun violence through strict gun control laws.

“We know that other countries in response to one mass shooting have managed to craft laws that almost eliminate mass shootings. Friends of ours, allies of ours, Great Britain, Australia, countries like ours,” he said.

Of course, this comparison doesn’t calm the fears of many who believe that so-called moderate, “commonsense” gun control solutions are merely a Trojan horse leading to mass confiscation as happened in Australia.

Even so, the evidence that the law made a huge impact in gun violence is unclear. As a University of Melbourne report concluded in 2008, according to National Review, “There is little evidence to suggest that [the Australian mandatory gun-buyback program] had any significant effects on firearm homicides.”

Although gun buybacks appear to be a logical and sensible policy that helps to placate the public’s fears the evidence so far suggests that in the Australian context, the high expenditure incurred to fund the 1996 gun buyback has not translated into any tangible reductions in terms of firearm deaths.

While Australia experienced a dip in firearm deaths after passing the 1996 law, so has the U.S. since the early 1990s, even as we moved in the opposite policy direction.

6. The Second Amendment Is Obsolete and Doesn’t Apply Today

Many gun control advocates acknowledge that the Second Amendment is a serious impediment to heavy-handed restrictions on firearms and confiscations and have advocated a repeal of this part of the Bill of Rights.

Others, however, have insinuated that the Second Amendment doesn’t apply today because the firearms used by the Founding Fathers were muskets, and that they couldn’t possibly have conceived of the devastating effectiveness of modern weaponry.

But the Founders did not design the Constitution to be an ephemeral document that would lose its applicability over time. They were quite aware that technological changes would come long after they were gone. They designed the Second Amendment to preserve the individual right to self-defense, just as they created the First Amendment to protect free expression.

William Blackstone, a British legal theorist whom the Founders often relied on for guidance, wrote, “Self-defense … as it is justly called the primary law of nature, so it is not, neither can it be in fact, taken away by the law of society.”

It was this reasoning that prompted the Founders to include the Second Amendment in the Bill of Rights.

Just as the rise of the internet and new communication technologies do not make the First Amendment invalid, the principles of the Second Amendment apply today, even as firearm technology has advanced.

Many studies show that news coverage and publicity surrounding school shootings only serve to increase their frequency. As Reason’s Robby Soave pointedly asked on Twitter, does this mean that it’s time to crack down on the First Amendment? A form of “news control,” so to speak.

Let’s say it turns out the following is true: wall-to-wall media coverage of mass shootings increases their prevalence (shooters like the attention). Would you support a law to limit coverage of such events? We’ll call it news control.

It is reasonable for Americans to be wary of policy proposals that would likely be ineffective, yet would negate our most precious individual rights.

This article has been updated to correct the year in which the Columbine massacre occurred.