Postal Service Lawsuit Is a Delivery of Pure Politics 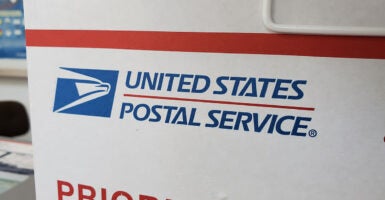 The U.S. Postal Service stands to lose billions of dollars this year and faces bankruptcy as early as next year. (Photo: Smith Collection/Gado/Getty Images)

The lawsuit filed last week by New York State Attorney General Letitia James against the U.S. Postal Service reads more like a 64-page list of talking points than a serious legal document. But that didn’t stop her colleagues in New Jersey, Hawaii, New York City, and San Francisco from joining the suit, giving a bicoastal flavor to this colossal waste of taxpayer dollars.

The suit does, however, further politicize what should be a sober, nonpartisan debate on how best to solve the Postal Service’s financial problems. Those problems are huge.

The Postal Service stands to lose billions of dollars this year and faces bankruptcy as early as next year. Without congressional action of some sort, bankruptcy seems inevitable.

Unfortunately, sober debate has been lost in a fog of misinformation and conspiracy theories—a fog made even denser by James’ filing.

The lawsuit alleges that Postmaster General Louis DeJoy, who took office on June 16, is altering Postal Service policies to hamper the delivery of mail-in ballots for this year’s election. However, the claims are nonsense.

The volume of letter mail has steadily declined for two decades and now stands at less than half what it was in 2001. As volume has fallen, the Postal Service has steadily reduced its inventory of things such as sorting machines and collection boxes under both Republican and Democratic administrations.

The charge that DeJoy is responsible for starting the removal of collection boxes and sorting machines is thus wrong on two fronts.

First, the removals are part of a long-term process to cut costs and keep the Postal Service financially sustainable. Second, this year’s removals were approved or underway prior to DeJoy’s arrival. In fact, the only order he has given regarding them is to halt further removals.

The lawsuit also alleges that the Postal Service is pushing state and local governments to use more expensive first-class postage for all mail-in ballots. This claim stems from a guidance letter that was drafted before DeJoy started.

The carefully worded guidance merely says that first-class postage might be more appropriate in cases of last-minute ballot requests. When similar guidance was issued before other elections, no eyebrows were raised.

The only significant policy change implemented by DeJoy relates to a dry but vitally important aspect of the Postal Service: logistics.

An inspectors general report pointed out that delivery trucks getting a late start was causing an increasing amount of expensive overtime pay. Acting on the report, DeJoy implemented a pilot program to emphasize on-time departures, which had the potential to generate significant savings.

In the following weeks, there was a drop in on-time mail delivery. Some of this was caused by DeJoy’s program, which he has ended.

However, a June spike in nationwide COVID-19 cases also harmed deliveries, with places such as Philadelphia at times being short hundreds of drivers. Placing the blame on DeJoy and claiming that the slowdown was evidence of deliberate sabotage is extraordinarily unfair.

Seen in that light, the lawsuit appears to be merely an exercise in election-year messaging, and a waste of time and resources that cash-strapped states such as New York and New Jersey can ill afford.

Meanwhile, as both parties devote their attention and energy to either demonizing or defending DeJoy, the Postal Service moves closer to insolvency.

A bill passed by the House on Aug. 22 would hand the Postal Service a $25 billion check. Unfortunately, that bill also blocks many reforms that would reduce future deficits, meaning that the threat of bankruptcy would return in a few years.

Rather than a bailout financed by adding to the $26.5 trillion national debt, Congress should work on legislation to reform the Postal Service based on 21st-century reality.

This could include reducing or eliminating unfunded mandates, giving the Postal Service more control over costs such as employee compensation, and providing greater flexibility to raise additional revenue.

Unfortunately, saving the Postal Service will be next to impossible if officials insist on using it as a political prop. Dropping the lawsuit would be a good first step toward reducing the unnecessary and unhelpful amount of tension surrounding the issue.