Fact Check: Debunking 10 Myths About the US Postal Service 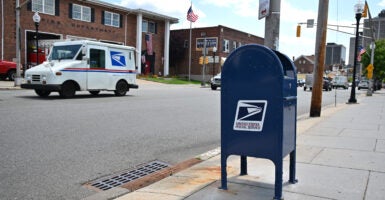 No, the Trump administration isn't rounding up mailboxes: Cars drive past a mailbox Monday in Morristown, New Jersey. Many myths are circulating about the U.S. Postal Service, especially pertaining to the November elections. (Photo: Theo Wargo/Getty Images)

The biggest focal point for online political drama today is an unlikely one; namely, the U.S. Postal Service. Representatives from both parties, conspiracy theorists, and even singer Taylor Swift are weighing in on the unsexy subject of mail.

Make no mistake: The Postal Service faces real challenges that require congressional action to solve. Yet, while genuine differences exist between the left and the right about how best to address the problems, that’s not an excuse for melodramatic rumor-mongering.

With the House convening a special session specifically to address issues involving the Postal Service, it’s important to separate myths from reality.

MYTH No. 1: The Postal Service is removing sorting machines to sabotage delivery

REALITY: The volume of mail has plunged in recent decades, due to the spread of electronic communication. As a result, the amount of infrastructure needed to manage the flow of mail also has declined.

The Postal Service has been consolidating operations for years to reduce costs, a practice that predates President Donald Trump.

MYTH No. 2: The Postal Service is removing collection boxes to block mail-in ballots.

REALITY: The Postal Service has more than 141,000 blue collection boxes spread across the country. Those boxes are moved regularly from low-demand to high-demand areas to maximize efficiency.

Photos of those boxes on the backs of trucks are part of standard operating procedure, rather than proof of a nefarious, anti-election plot.

Despite that, the Postal Service has decided to pause any further moving of boxes until after the election as a result of the online panic.

MYTH No. 3: The Postal Service is locking collection boxes to prevent public access.

REALITY: Locked caps are sometimes put on collection boxes in areas where there is a rash of mail theft. Employees place the caps after the final pickup of the day and remove them in the morning, since collection box theft is overwhelmingly done at night.

MYTH No. 4: The Postal Service could go bankrupt before the election without a $25 billion bailout.

REALITY: Although some were concerned that the COVID-19 pandemic would push the Postal Service over the financial edge, revenues have been stable, thanks to a big increase in package deliveries.

In addition, Congress provided a $10 billion loan to the Postal Service earlier this year.

As a result, there’s virtually no scenario where the Postal Service goes bankrupt this year, meaning that a proposed $25 billion bailout has no reasonable connection to the coming election.

However, Congress shouldn’t view this fact as a reason to be complacent when it comes to passing reforms.

MYTH No. 5: The Postal Service plans to triple postage rates on mailed ballots.

REALITY: The Postal Service provided commonsense guidance to state and local governments regarding how to handle time-sensitive ballot requests. This guidance was already in the works before Postmaster General Louis DeJoy began his job.

Most mail-in ballot requests are made weeks or even months in advance, and thus can safely be sent using low-cost, second-class mail.

However, some places allow for mail-in ballot requests a mere four days before the election. In those situations, it makes sense to use full-cost, first-class mail to ensure that voters get their ballots on time.

The idea that this sensible guidance amounts to extortion by DeJoy should be laughable, except that it has been promoted by the likes of Senate Minority Leader Chuck Schumer, D-N.Y.

MYTH No. 6: Postal Service delivery changes are illegal “sabotage” by the postmaster general.

REALITY: DeJoy, who assumed the postmaster general’s post in June, was selected in large part due to his decades of experience as CEO of New Breed Logistics, a supply chain company.

The logistics industry’s focus is on maximizing cost-efficiency and on-time performance, both of which the Postal Service needs to improve. With that in mind, DeJoy has undertaken initiatives aimed at reducing costs and improving service levels.

It’s too early to tell whether these changes will be successful, and DeJoy has announced a suspension until after the election. While the media reliably reports alarming anecdotes from postal union officials who oppose cost-cutting efforts, data shows that postal performance has not yet experienced a significant change under DeJoy.

Representatives from both parties have expressed disapproval of efforts to pull the Postal Service out of chronic annual deficits.

That’s part of a long-term trend of Congress’ imposing unsustainable mandates for the sake of its own political benefit. Liberating the Postal Service from those mandates would be the best path forward.

Leaders of both parties wrongly have suggested that the Postal Service lacks the resources to handle the millions of ballots that will be sent through the mail this year—meaning that it will require additional taxpayer funding.

REALITY: The Postal Service handled about 2.75 billion items per week in 2019, with spikes at various times of the year, such as the holiday season.

Mail-in ballots will represent at most a few percentage points of total volume this fall, even with an expected increase in requests due to COVID-19.

Further, given that regular mail volume has dropped in 2020, the Postal Service has excess processing capacity. It does not need additional resources for the election.

REALITY: When DeJoy took over in June, there was a modest amount of personnel change within the top levels of Postal Service management. Much of that involved internal promotions. Senior departing staff were replaced by experienced employees.

New leadership at the top of a large organization almost always includes some amount of change underneath, and the Postal Service is no exception.

The change is similar to what happened when previous postmaster generals took over, rather than a heavy-handed “takeover.”

MYTH No. 9: The Constitution requires a government-run Postal Service.

REALITY: Article 1, Section 8 of the Constitution authorizes Congress to establish post offices and to provide for “postal roads.” That doesn’t mean that post offices and roads are mandated, or that badly needed cost savings are a constitutional crisis.

MYTH No. 10: The Postal Service loses money only because of unfair funding requirements.

REALITY: The Postal Service is weighed down by exceedingly high employee compensation costs, which averaged more than $97,000 per worker in 2019. Part of that includes a retiree health plan, which has obligations similar to a pension.

Bipartisan legislation passed in 2006 required that the Postal Service prefund the retiree health plan like a pension plan, with money deposited as an employee earns future benefits. That’s intended to ensure that there’s money to provide for the health coverage when employees retire.

Unfortunately, the Postal Service has failed to uphold its funding obligations, leaving the plan $69 billion in the hole as of last fall.

Furthermore, the Postal Service would have lost more than $4 billion in 2019 alone even if it had not paid a penny into the health plan.

One alternative to prefunding is allowing the health plan to accumulate massive liabilities, which would guarantee an even bigger financial crisis than what the Postal Service is already facing.

That would be irresponsible and unfair for both postal employees and taxpayers alike.

The other alternative to prefunding would be to turn the Postal Service into a standard government agency, which is the stated goal of many Democrats.

A federal bailout of the Postal Service would be the first step toward placing yet another massive burden on U.S. taxpayers.

Rather than allowing costs and deficits to grow unchecked, Congress should pass reforms that would enable the Postal Service to raise revenue and lower costs, stabilizing its shaky finances.

From there, we should have a robust debate about the future of the Postal Service and whether its current structure makes sense.

Meanwhile, the sooner we stop spreading unfounded rumors about the Postal Service, the more likely we will be to reach agreement on solutions.