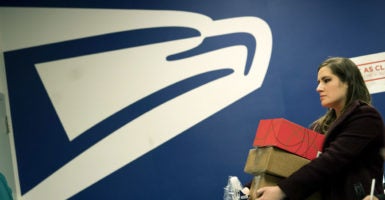 The U.S. Postal Service increasingly depends on a contract with Amazon for its own survival. (Photo: Kevin Dietsch/UPI/Newscom)

Is Amazon causing the U.S. Postal Service to lose money?

That’s the assertion made by President Donald Trump last week in a series of tweets criticizing a Postal Service contract with Amazon, under which the Postal Service delivers Amazon orders to homes across America.

Amazon is using the Postal Service as its delivery boy, complains the president. But others point out that that is exactly what the government-owned enterprise exists to do—and that without Amazon’s business, the Postal Service would be far worse off.

As is the case with most such business questions, neither side can be definitively proved right or wrong. Not only are key numbers (rightfully) held confidential, but no one can say with precision whose business judgment is right or wrong. That’s what markets are meant to do.

Yet, in general terms, the Postal Service’s long-term shift toward package delivery was not only a step in the right direction, but a necessary one, given the virtual collapse of mail markets since the turn of the century, and it would have been the equivalent of business malpractice for the Postal Service management to ignore it.

Moreover, this postal kerfuffle has underscored a much bigger flaw in the postal system: the federal government’s ownership and political control over the enterprise. If the Postal Service is to survive, this must be ended—and the Postal Service recast as a private entity, responsive to consumers, not politicians.

It would be difficult to find two companies more dissimilar than Amazon and the Postal Service.

Amazon, founded in 1994 as an online bookseller, has used the internet to transform retail commerce, becoming one of the world‘s largest companies in the process. The Postal Service’s story is just the opposite. With a history traceable back to Benjamin Franklin, the Postal Service has struggled to find its role in the internet world.

The figures are stark. Since 2001, first-class mail volume has dropped by about a third. Advertising mail has barely held steady. The Postal Service has suffered losses for 11 straight years, most recently reporting a loss of $2.7 billion for fiscal year 2017.

The only delivery market that has been growing is parcel delivery. Here, the economics of the internet have expanded business, rather than shrunk it.

Key to this growth has been its deal with Amazon, under which the Postal Service delivers a reported 40 percent of the internet retailer’s orders to American homes. That is no small prize in the competitive package delivery business, and stands in stark contrast to market retreats for the Postal Service elsewhere.

But some critics have argued that this deal has cost the Postal Service more than it gains. They point to an analysis by Citigroup that concludes that the Postal Service loses $1.46 per package under the Amazon contract. In effect, they say, Amazon’s deliveries are being subsidized by the Postal Service’s letter mail and other products in order to drive out competitors such as FedEx and the United Parcel Service.

It is unlikely that such a subsidy exists. First, the Postal Service’s pricing is reviewed by an independent regulator, the Postal Regulatory Commission, created to avoid just this sort of thing. Even more important, it’s hard to see where the money for any such subsidy is coming from.

Does anyone seriously believe that first-class mail is somehow a cash cow that provides money to support other activities? The reality is likely the other way around: The Postal Service, faced with collapsing mail markets, moved into the only growing market around—package delivery. That move seems sensible, and should be lauded rather than denounced.

But the controversy also provides a deeper lesson for policymakers. The Postal Service must be allowed—and structured in a way to be able—to exercise business judgment in running the enterprise, rather than be beholden to political incentives.

In this regard, the Amazon case is far from unique. Politicians from both parties, and from Congress as well as the administration, have long seen the Postal Service as their personal fief, dictating not just broad business strategy, but often even the details of how it is carried out.

In the past few years alone, while the Postal Service has been contending for its very survival, Congress has worked to impose restrictions on closing unneeded post offices and other facilities, mandate service times, and put into statute which days mail should be delivered.

Such political micromanagement is more than a distraction, it is an obstacle to the ability of Postal Service management to provide good service while protecting the taxpayers’ investment.

Startlingly, rather than ensure that the Postal Service is able to exercise good business judgment, it has made it more difficult.

Most urgently, the Senate needs to repopulate the Postal Service Board of Governors. Created to ensure good oversight and expertise for the Postal Service, only two of its 11 seats are now occupied. These vacancies need to be filled.