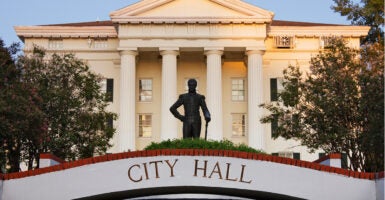 The Jackson, Mississippi, City Council on Tuesday voted 5-1 to remove and relocate a statue of 19th century President Andrew Jackson—for whom the state capital is named—from the city building, according to the Clarion Ledger.

The lone Republican on the City Council voted to keep the city’s namesake statue, according to the Clarion Ledger.

“While removing a statue does little to change our condition as oppressed people, we should not have to constantly encounter the likenesses of those who profited off of the blood, sweat, & despair of our ancestors or see them immortalized as honorable,” Lumumba said.

Lumumba said the goal, in part, was to “reclaim the name of our city.” Removing the statue of the seventh president of the U.S. would help the town reinforce biblical definition of the name Jackson, which means “God has shown favor,” Lumumba said.

The statue of Andrew Jackson, built in 1968, is mounted in the center of a brick fountain in a plaza directly outside the City Hall. The statue has been criticized since Jackson was a former slaveowner and presided over the Trail of Tears, when American Indians were removed from their native lands.

Statues of historical figures associated with slavery and the Confederacy have been removed or torn down and vandalized in recent weeks amid protests against racial inequality.

President Donald Trump recently signed an executive order in June to strengthen legal protections for statues and monuments against vandalism and removal by protesters.

The Jackson City Council has not released information or a timeline about the removal process of the statue, but it will likely be relocated to a museum, according to the Clarion Ledger.

Neil Shah is a contributor to The Daily Caller News Foundation.