Donors to Charities Can’t Be Exposed Under New Mississippi Law 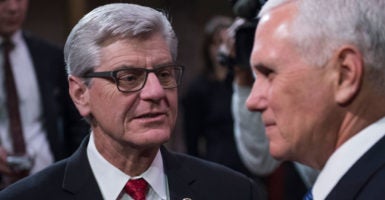 Mississippi’s governor has signed into law a donor privacy bill designed to protect the anonymity of those who give money to nonprofit charities.

Gov. Phil Bryant, a Republican, signed the legislation known as HB 1205 last week after both houses of the Mississippi Legislature passed it.

“In recent years, charitable donations have been weaponized by certain groups against individuals to punish donors whose political beliefs differ from their own,” Bryant said afterward in a tweet March 28. “I was pleased today to sign HB 1205, which protects free speech rights of Mississippians who make charitable donations.”

Not everyone in Mississippi was on board with the donor privacy bill.

In an opinion piece published in The Meridian Star, columnist Bill Crawford urged the governor to veto the legislation. Crawford accused Republican state lawmakers of working “to protect dark money from the light of transparency.”

Crawford wrote that he views HB 1205 as an extension of the Supreme Court’s 5-4 ruling in the 2010 case Citizens United v. Federal Election Commission. He argued that the high court’s decision made it possible for “big money individuals and corporations” to “funnel millions” into charitable entities “for the sole purpose of influencing elections for or against candidates.”

But top officials with the Mississippi Center for Public Policy, a nonprofit free-market think tank that is part of the State Policy Network, view the matter differently.

The legislation signed by Bryant provides critical free speech protections to private citizens who dissent from the policy positions of government figures, they argue.

“The enemies of free speech and free association are making our political environment toxic by seeking to silence and intimidate anyone who disagrees with them,” Jameson Taylor, vice president for policy at the organization, said in a press release, adding:

In Montana, the governor is going after businesses who donate to trade associations like the U.S. Chamber of Commerce. In California, then-AG Kamala Harris made it a priority to obtain the donor lists of conservative groups like Americans for Prosperity. At the federal level, Nancy Pelosi and the Democrat-majority House have passed HR 1, which would destroy donor privacy and politicize the federal contracting process.

Unfortunately, these tactics are not new. They were used by government officials in the 1950s in an effort to destroy the NAACP. They are being used today to bully and harass donors who give to nonprofit organizations.

ALEC warns that release of donor information “could lead to harassment and harm” for individual givers. Although  proponents of donor disclosure argue that it’s needed to ensure transparency, the council says it views that as “a dangerous misrepresentation.”

“Transparency is for the government, privacy is for the citizen,” ALEC says on its website. “Donor information can and has been used to threaten and intimidate opponents.”