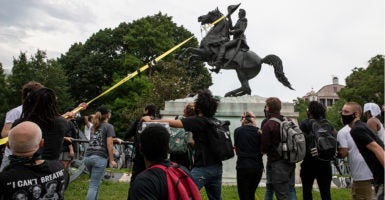 Protesters attempt to pull down the statue of Andrew Jackson in Lafayette Square near the White House June 22, 2020, in Washington, D.C. (Photo: Tasos Katopodis/Stringer/Getty Images)

Four people have been charged following an attempt to dismantle a prominent statue of former President Andrew Jackson near the White House, the Department of Justice said Saturday.

All four of the men were purportedly caught on video allegedly either attempting to affix straps in order to bring down the monument or actively pulling the statue, according to the DOJ.

Lee Michael Cantrell, 47; Connor Matthew Judd, 20; Ryan Lane, 37; and Graham Lloyd, 37, were charged in connection with a June 22 demonstration that tried, but failed, to rip down a statue of Andrew Jackson, the 17th president of the United States, according to a DOJ press release.

“The United States Attorney’s Office for the District of Columbia will not stand idly by and allow our national monuments to be vandalized and destroyed,” acting U.S. Attorney Michael R. Sherwin said in the press release.

“This Office remains steadfast in its commitment to protect the sacred First Amendment right of individuals to peacefully protest, but these charges should serve as a warning to those who choose to desecrate the statues and monuments that adorn our nation’s capital: your violent behavior and criminal conduct will not be tolerated.”

Judd was arrested Friday and brought before a judge on Saturday. The DOJ did not specify whether the other three men had been arrested.

Protests sparked by the death of George Floyd, who died after a police officer knelt on his neck for over eight minutes, have targeted several historic monuments. Demonstrators have gone after statues reminiscent of a racist past and have torn down and vandalized depictions of Confederates and American Founders alike, according to a list compiled by The Hill.