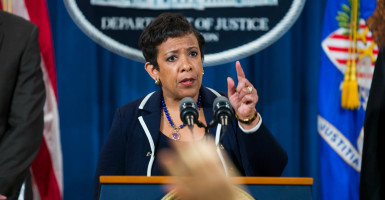 The Justice Department is halting a controversial program that allows law enforcement to keep most of the proceeds of cash and property they seize from Americans under federal law, sometimes without charging anyone with a crime.

Now the law enforcement community, which benefits from the program, is pushing back against the Justice Department, saying its decision could have negative consequences on public safety.

Just days before Christmas, the Justice Department announced suspension of its “equitable sharing” program. In a letter to state, local, and tribal law enforcement agencies, the department said it is deferring payments to the agencies because of cuts to its budget, deepened in the spending package passed by Congress earlier this month.

“The department does not take this step lightly,” M. Kendall Day, head of the Justice Department’s asset forfeiture and money laundering division, wrote in the letter, adding:

We explored every conceivable option that would have enabled us to preserve some form of meaningful equitable sharing while continuing to operate the program and meet our other fiscal obligations. Unfortunately, the combined effect of the two reductions totaling $1.2 billion made that impossible.

Under equitable sharing, local and state law enforcement agencies seize property and cash under federal forfeiture laws and receive a sizeable portion—up to 80 percent—of the proceeds from what they say are assets tied to crimes.

Opponents of civil forfeiture view law enforcement’s use of equitable sharing as a way to circumvent stricter state forfeiture laws.

Civil forfeiture is a tool that gives law enforcement the power to seize property and cash if they suspect it is connected to a crime.

According to a November report from the Institute for Justice, a public interest law firm opposing civil forfeiture, state and local law enforcement agencies received $4.7 billion in forfeiture proceeds from 2000 to 2013 through the Justice Department’s program.

In letters to President Barack Obama, Attorney General Loretta Lynch, and congressional leadership, the leaders of six law enforcement groups, including the International Association of Chiefs of Police and the National Association of Police Organizations, warned of the consequences that ending such efforts would have on the communities they serve.

“Given the remarkable success of this program, the provisions approved by Congress and the [Obama] administration are both baffling and disappointing. The suspension of equitable sharing payments may cause some agencies across the country to reconsider their ability to participate in joint task forces with the federal government,” the law enforcement officials wrote, adding:

The effects of this decision are far reaching and not only a disservice to law enforcement, but also to the public they are sworn to protect.

In a separate statement, the National Sheriff’s Association said the Justice Department’s decision will hinder law enforcement agencies’ ability to do their jobs.

“While Congress and the president vacation in peace and tranquility, law enforcement knows all too well that the criminals, terrorists, and criminal aliens do not take a holiday,” the group said. “Those seeking to do us harm can rest easier knowing one less tool can be used against them.”

Though law enforcement organizations have said suspension of the program limits the tools at their disposal, civil forfeiture opponents are cheering the Justice Department’s decision.

“Law enforcement revealed that its true interest in forfeiture is policing for profit—not public safety,” Lee McGrath, legislative counsel for the Institute for Justice, said in a statement. He continued:

The recently enacted Consolidated Appropriations Act does not stop police and prosecutors from chasing criminals. They’re frustrated because Congress put on hold their chasing cash. … Many police, sheriffs and prosecutors want to circumvent state laws because outsourcing forfeiture litigation to the federal government is lucrative.

Those opposing civil forfeiture and the equitable sharing program warn that they provide a perverse profit incentive to law enforcement and flip the presumption of innocence on its head. Additionally, in many states, the proceeds of cash and property forfeited go directly into the agencies’ own coffers.

Despite law enforcement’s ardent support of civil forfeiture, recent reports show that police are seizing property from individuals and never charging them with a crime.

In response, some states have moved to reform their asset forfeiture laws and, in some cases, limit law enforcement’s participation in equitable sharing.

In New Mexico, for example, Gov. Susana Martinez signed legislation earlier this year allowing state and local law enforcement to transfer property to the federal government only if it is worth more than $50,000, effectively ending the state’s participation in equitable sharing.

Before passing reforms to its civil forfeiture laws, New Mexico received more than $41 million in equitable sharing proceeds from the Justice Department from 2000 to 2013, according to the Institute for Justice.

The organization ranked Rhode Island, New York, and California among the worst for their use of equitable sharing, saying the three states received more than $1.3 billion through the Justice Department from 2000 to 2013.