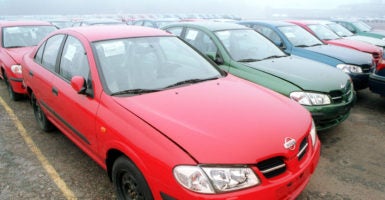 A Nissan plant's vote on whether to unionize marks the largest public effort by organized labor to gain ground in the Deep South since President Donald Trump’s election. (Photo: Caro/Andreas Bastian/Newscom)

The UAW won a deal with Japanese-based Nissan Motor Co. allowing close to 4,000 full-time employees at its Canton, Mississippi, plant to vote on whether to organize as a labor union.

Unions are the best way to give American workers a fair shot. Workers in MS are being intimidated to vote no. https://t.co/Rms3etKrb3

Hollywood actor Danny Glover, a supporter of Sanders’ failed 2016 presidential bid as a Democrat, visited a UAW office in Canton to meet with workers, some of whom will vote in the election.

The vote, which takes place Thursday and Friday, marks the largest public effort by organized labor to gain ground in the Deep South since President Donald Trump’s election. The UAW has been fighting to organize the plant since 2012.

Sanders and civil rights activists attended the March on Mississippi, where they accused Nissan of trying to intimidate workers from unionizing. The company has denied the charges.

Nissan argues that UAW representation is not in the best interest of Nissan Canton or its workers. The UAW accuses Nissan of preventing workers from unionizing.

“There’s no question UAW organizers have their sights set on auto manufacturing in Southern right-to-work states as a way of replenishing their dues coffers,” said Patrick Semmens, vice president of the National Right to Work Legal Defense Foundation, adding:

While they’ve lost membership and jobs with the traditional Big Three, other car companies that are better known for making cars in Europe or Japan have been expanding and creating thousands of good jobs in right-to-work states.

Union leaders previously have targeted plants in the South. The UAW attempted to organize Nissan’s Tennessee facility in the past to no avail.

Nissan long has argued to its Mississippi-based employees that union representation isn’t a good idea and that they already have some of the best salaries and benefits in all of Mississippi.

The UAW has criticized the Canton plant for failing to protect workers’ safety and for relying on contract workers, who it can pay less.

The Daily Caller News Foundation sought comment from both the UAW and Nissan, but did not hear back by publication deadline.