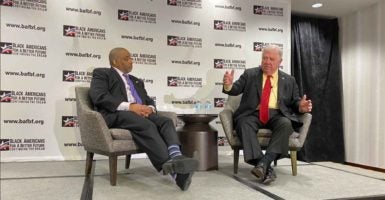 Conservatives need to make an effort to be in the spaces of blacks and other minorities to grow their numbers and influence in the movement and the Republican Party, a former governor and party chairman argues.

“Try. Be seen. Learn their issues, go to their churches, go to their barbecues, or whatever it is,” Barbour advised during the lunch hosted by the Black Americans for a Better Future Educational Fund. “Make yourself visible. Recruit volunteers, make sure they know you really well and [that] they matter and are appreciated.”

Barbour, Mississippi’s governor from 2004 to 2012 and RNC chairman from 1993 to 1997, said he himself was a minority when he entered the state’s politics.

“When I was coming along, there was no Republican Party,” he said.

“We were a one-party state from 1875 to 1991; for 116 years, every governor was a Democrat. We elected our first governor in ’91 and we have actually won six out of seven governor’s races since then. … But I can remember literally when there were no Republicans.”

Former Rep. Tom Davis of Virginia said conservatives and Republicans in general must engage minorities if they want minorities to be part of the movement.

Davis, who represented Virginia’s 11th Congressional District from 1999 to 2003, added that African Americans who choose to be Republicans often need substantial support because they become immediate targets of Democrats.

“It isn’t easy being a black Republican, because Democrats target you right away,” he said, adding:

You are a target. For [Rep.] Will Hurd in Texas, they spent millions, didn’t get him last time. But he’ll be back, I believe he’ll be back. [Rep.] Mia Love in Utah, in a relatively safe seat, they put millions of dollars in the air [to defeat her] because they don’t want [us] to get a beachhead here. They want to own this boat.