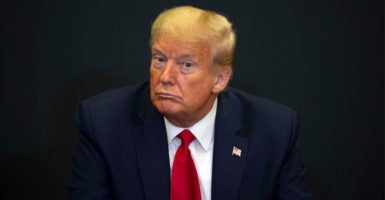 Fact-checking sounds innocuous enough. After all, as the late Senate Democrat Patrick Moynihan reportedly once said, “Everyone is entitled to his own opinion, but not his own facts.”

But Twitter just showed that fact-checking can also be weaponized, used in a way that promotes one side’s ideology over another.

The tech giant, which has been under pressure from the left for years to censor or delete President Donald Trump’s tweets, did a “fact check” Tuesday on two of Trump’s tweets about mail-in ballots.

Conveniently for liberals, the fact check, which cited media outlets like The Washington Post and CNN as its only named sources, found that Trump’s facts were wrong. Notably, it was also the first time Twitter—which hosts politicians across the ideological spectrum—fact-checked a tweet.

Unsurprisingly, Trump was furious, threatening in a tweet Wednesday to “strongly regulate, or close them down” in reference to social media companies. He also said: “Republicans feel that Social Media Platforms totally silence conservatives [sic] voices.”

Neither Trump nor Twitter is in the right here. As a private company, Twitter should be legally free to do what it wants on its own platform. Trump is free to suggest that Americans who value serious debate and free expression, regardless of their ideologies, boycott Twitter. But this is no case for government intervention in a private business.

However, unless the goal was to be seen as a left-leaning company, Twitter was irresponsible and foolish with its “fact check”—which I’m putting in scare quotes because it’s not even an accurate fact check.

Here are the two Trump tweets that got slapped with the fact-checking label from Twitter:

On Tuesday, President Trump made a series of claims about potential voter fraud after California Gov. Gavin Newsom announced an effort to expand mail-in voting in California during the COVID-19 pandemic. These claims are unsubstantiated, according to CNN, Washington Post and others. Experts say mail-in ballots are very rarely linked to voter fraud.

First of all, it’s simply not true that “mail-in ballots are very rarely linked to voter fraud,” or that Trump’s claim was “unsubstantiated.”

The Daily Signal’s national affairs correspondent, Fred Lucas, reported last month on “15 instances in which courts threw out an election result based in whole or in part on absentee voting fraud,” citing The Heritage Foundation’s Election Fraud Database and other sources.

Then there’s Twitter’s telling attribution: “These claims are unsubstantiated, according to CNN, Washington Post and others.”

Ah, yes, CNN, whose White House correspondent Jim Acosta basically has been engaged for years in verbal sparring with Trump. And the Post, which has its own reputation as a liberal outlet, is hardly a completely objective source, either.

So who are these “others”? Did Twitter consult with anyone, researcher or journalist or scholar, at a less liberal publication or institution? Did Twitter make any good faith attempt to consult with a variety of experts of differing ideological leanings, so that it could see the full context and data before making a ruling?

Because if Twitter is only relying on liberals for its fact-checking, it won’t be surprising if the supposedly unbiased fact-checking becomes quite ideological.

The Twitter official [Yoel Roth] overseeing the tech company’s efforts to combat misinformation is a left-wing partisan who in the past has derided President Donald Trump as a ‘wretched orange man’ and said he donated to former Secretary of State Hillary Clinton’s 2016 presidential campaign.

Of course, ultimately, Twitter is a private company and it can choose its own standards and practices. But consumers are also free to decide whether to remain on a platform that seems to be on the cusp of implementing a double standard when it comes to fact-checking.

It will be extremely telling what Twitter chooses to do in the days ahead.

Will the social media company fact-check liberals, too—or will Trump alone bear the stigma of a fact check? Will fact checks rely only on liberal sources, or will they involve conservative sources as well? Will Twitter modify its fact check of Trump’s tweet, acknowledging that instances of voter fraud are tied to absentee ballots?

No doubt, Twitter has been under unusually high pressure from the left in recent days.

A widower wrote to Twitter CEO Jack Dorsey this month, distraught that Trump was tweeting conspiracy theories that the man’s late wife, a staffer for then-Rep. Joe Scarborough, had been murdered.

While Trump’s tweets on this matter are shameful—if he wants to fight with Scarborough, now an MSNBC host, he can do so without bringing up an unrelated person’s death—the answer is not for Twitter to take action on Trump’s tweets.

As we’ve been saying more and more over the past decade and change, America is a divided nation, with heated opinions on both sides on a host of topics. Selective fact-checking, aimed at the right and only looking to the left for the truth, will only increase that division.

Twitter has opened a real Pandora’s box here. Let’s hope the tech giant realizes its mistake, takes down the fact check of Trump’s accurate tweet, and returns to being a company that merely hosts, not criticizes, viewpoints.