In Trump Fact Check, CNN Fact-Checker Leaves Out …the Facts 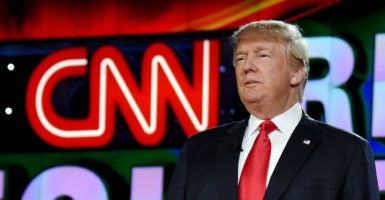 CNN published a “fact check,” claiming President Trump severely exaggerated the sad state of the munitions stockpile when he became president, and also his impact on the rebuild since. Pictured: Then-candidate Trump at the CNN presidential debate on Dec. 15, 2015, in Las Vegas. (Photo: Ethan Miller/Getty Images)

CNN’s fact-checking unit reached out last week to The Heritage Foundation for analysis of President Donald Trump’s recent comments about the U.S. military’s munitions stockpile at the time he took office.

Bewilderingly, the fact-checker for the cable news pioneer then ignored those facts.

Some 24 hours and multiple emails after the initial request, CNN published its “fact check,” claiming Trump severely exaggerated the sad state of the munitions stockpile when he became president, and also his impact on the rebuild since.

Just one problem: CNN completely omitted the wealth of data provided by a Heritage Foundation defense analyst demonstrating exactly the opposite to be true.

This episode highlights an important question—every reporter is a fact-checker. But what’s the response when someone, especially someone with “fact-checker” in his title, just … gets the fact checks wrong?

Based on research provided to CNN, Col. John “JV” Venable, Heritage’s senior research fellow for defense programs, laid out how the U.S. military was indeed facing a munitions shortage in the waning years of the Obama administration. Venable is a retired Air Force pilot with 25 years of service.

Using publicly available data from U.S. Central Command and the secretary of the Air Force’s Financial Management website, Venable showed that the joint force dropped more than twice as many precision-guided munitions (PGMs)—think “smart bombs,” like the JDAM (Joint Direct Attack Munition)—in just the last three years of the Obama administration than the Air Force could purchase during the full eight years of President Barack Obama’s tenure.

While Navy numbers were not included in the analysis to CNN, Venable did note that Air Force acquisition of precision-guided munitions dwarfs that of the Navy—analysis the numbers also showed to be true.

According to a 2018 Defense Department Selective Acquisition Report, the service purchased a total of 4,485 JDAM guidance kits during the eight years of the Obama presidency. When added to the 45,198 the Air Force purchased during the same years, the joint force collectively acquired 49,963 precision munitions, while it dropped around 96,000 in just the three years preceding Trump’s inauguration.

Not only was the force dropping far more bombs than it was taking in—the delay between getting munitions from the checkout line to the flight line was also a compounding factor.

“[I]t takes 2-3 years from purchase order to delivery of these munitions,” Venable wrote to CNN, adding that, “Currently the Trump administration is rebuilding the PGM stockpile by purchasing as many munitions as current production capacity allows.”

The bottom line, he wrote, “is that the Obama administration effectively gutted the munitions stockpile.”

Trump’s leadership has reversed that trend markedly, however.

“By the end of fiscal year 2020, the Trump administration will have acquired more than four times the number of GPS-guided munitions than were acquired during the eight years of the Obama administration—years when expenditures [munitions dropped] were very high,” Venable told CNN.

At current rates for the Air Force, the total will come to more than 192,000 munitions by next October.

The evidence is overwhelming: The U.S. military was facing a dwindling precision munitions stockpile as Obama left the White House, and, all bluster aside, Trump has begun to erase it.

Unfortunately, CNN’s piece, which should have evaluated those very numbers, included none of them. Instead, the piece (“Fact check: Trump exaggerates on munitions shortage”) found Trump’s claim to be “a severe exaggeration.”

Despite having Venable’s analysis in hand, the author, Daniel Dale, wrote: “It has never been clear how dire or how unusual the perceived shortage was, since the military does not release comprehensive data about ammunition levels.”

When asked why such important details, which should have markedly changed the outcome of the fact check itself, were omitted, the fact-checker replied: “I very much do not think that JV’s data … was itself even remotely close to assess the extent of the shortage.”

To make matters worse, the piece used vague, data-less commentary from other analysts downplaying any possible munitions shortage, while omitting the numbers-based data from Venable that showed Trump’s comments may have been correct.

He also claimed the numbers irrelevant to the “military’s concern” about specific “possible contingencies.”

Yet, Venable wrote in his analysis: “Estimates for the monthly expenditure of munitions in a war with China or Russia dwarf the 5,000 PGM munitions/month the U.S. endured at the height of the GWOT [Global War on Terror].”

In other words, the shortage was even more drastic, not less, if tied to a specific conflict with Russia, China, North Korea, or Iran, because the military would need even more munitions to successfully engage in such a conflict.

What this instance illustrates is the importance of unbiased fact-checking, and a pursuit of narrative based on the facts, not the other way around.

I have worked with a wide variety of reporters for nearly a decade, and let me tell you—it’s not mere lip-service to say that the overwhelming majority, whether official “fact-checkers” or not, take their responsibility to uncover and report the truth seriously.

And, they do this despite what some at the highest levels of government today might say.

However, sometimes individuals get the story wrong. When that happens, those involved in helping tell it should correct the record, especially about a topic as vital as the strength of our military.

Indeed, downplaying this facet of the readiness crisis serves only to hurt the military most of all. If the public is not aware of the military’s needs, how can they be expected to support the actions necessary to meet those needs?

That is the right standard for all of us.