Blame Activists, Cartels for Crisis at Border, Not Trump 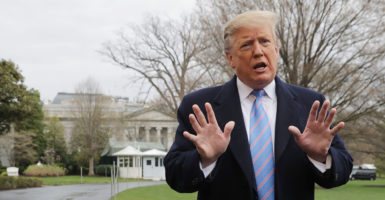 Securing the border is a critical mission. It was never something to be complacent about, and the situation there has demonstrably deteriorated.

So, it’s not surprising that the president decided to change leadership at the Department of Homeland Security. When President Donald Trump doesn’t get results, he shakes things up. That’s always been his way.

Kirstjen Nielsen is a tough woman who took on a tough job. She faithfully served her president and the nation.

I worked with Kirstjen for decades as part of the community of scholars and practitioners who advocated effective homeland security policies. We served together on the presidential transition team. Kirstjen gave the administration two years of dedicated service, working in a variety of roles. Every day she put the nation and the mission first. The president could not have asked for a more loyal and dedicated supporter.

Her critics on the right and left are off base. Those who want to intimate that she was soft on the president’s “get tough” approach to border security and immigration enforcement are just wrong. On the other side, those who attack her being too tough are in denial about the problems her department must deal with.

What are some of those problems? For starters, there is a humanitarian crisis at the border. Every day, innocent children are placed at risk. Every day, families endure unspeakable hardships.

But don’t blame the secretary or the president. Blame activists who are organizing and encouraging caravans and bogus asylum-seekers to rush the border. Blame multibillion-dollar criminal cartels that exploit human trafficking. Blame ineffective leaders in Congress who deny a crisis exists—even as illegal immigration soars and conditions deteriorate.

Some of Kirstjen’s critics are little more than enablers—perpetuating policies that have encouraged what amounts to a modern-day trail of tears—all because they see this human misery as a lever that can be used in their ongoing, partisan political battle with the president.

The hypocrisy is maddening. The crisis at the border could be quickly brought under control if Congress would take these necessary and commonsense steps: fund the wall; provide adequate resources for detention; speed up asylum claims processing, and close the legal loopholes that allow activists and criminals to encourage flooding America with unprecedented numbers of illegal immigrants.

But Trump’s political opponents will have none of that. Instead, they call for amnesties and open borders, which will only open the floodgates wider.

The real loser here is not Kirstjen. She can be proud of her service to the American people and the president. It is not Trump, who will relentlessly pursue protecting the nation. Those who will lose the most are American citizens. They will have to bear the cost of providing social services to millions of illegal immigrants.

Absent congressional willingness to fix the immigration system, the president has few options other than to do whatever he can to secure the border. Trump is not one to stand by and not try every possible legal option to get the job done—and that includes shaking up the team. On Team Trump, no one is more important than the mission. The president rightfully thanked the secretary for her service. Now the challenge is to impress on new leaders the need to keep at it.

Perhaps the strongest message here is for the president’s detractors. If they think he will ever back off in pursuit of securing the border and fixing a broken immigration system, they are wrong. His latest action is just another reminder of that.