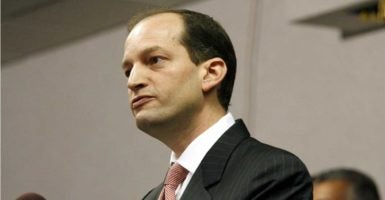 Acosta is a former federal prosecutor and the dean of the Florida International University College of Law in Miami.

“After careful consideration and discussions with my family, I am withdrawing my nomination for secretary of labor,” Puzder said in a statement Wednesday. “I am honored to have been considered by President Donald Trump to lead the Department of Labor and put America’s workers and businesses back on a path to sustainable prosperity.”

Puzder withdrew his name from consideration after news broke that Senate Republicans advised the White House that four, and up to as many as 12 GOP senators were unwilling to support him. He was under a barrage of negative stories, including reports that he paid some employees in cash, hired an illegal immigrant housekeeper, and allegedly abused a former spouse.

Catherine Templeton, a former state director of labor in South Carolina and confidant of former Gov. Nikki Haley, was one of the finalists to replace Puzder. Joseph Guzman, a professor at Michigan State University in the Department of Human Resources and Labor Relations, was also a finalist for the position.