Trump: Tax Reform ‘Will Lift Our People From Welfare to Work’ 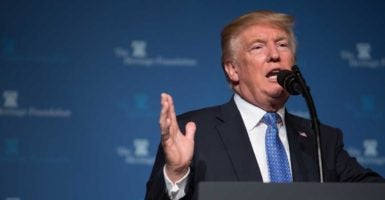 “We will lift our people from welfare to work, from dependence to independence, and from poverty to total beautiful prosperity,” Trump told an audience of about 1,000 people Tuesday night gathered at the Marriott Marquis in Washington.

“Our tax plan will ensure that companies stay in America, grow in America, and hire in America,” the president said. “At the heart of our plans is a tax cut for everyday working Americans.”

The tax reform proposal backed by Trump and congressional Republicans would increase the deduction for child care and caring for elderly adults; make the first $12,000 for individuals and first $24,000 for married couples income tax-free; eliminate the penalty for businesses bringing back earnings to the United States; simplify the tax filing process so that most Americans can file on a single sheet of paper; cut the corporate tax rate from 35 percent to 20 percent, which the White House Council of Economic Advisers estimates would boost wages by $4,000 for the average American household; and eliminate the death tax.

Trump predicted if tax reform passes, it would bring $3 trillion back in the American economy.

Trump said Democrats will vote in blocks to obstruct, but said he hoped to get the Republicans needed.

“We need the help of The Heritage Foundation and everyone here tonight to get our tax cuts through the House, through the Senate, and to my desk for signature,” the president said. “So, call up your local senator and say, ‘Senator, don’t give him a hard time.’”

Trump is only the fourth president to address The Heritage Foundation in the think tank’s 45-year history. The others were Ronald Reagan, George H.W. Bush, and George W. Bush.

Thank you @Heritage! This is our once-in-a-generation opportunity to revitalize our economy, revive our industry & renew the AMERICAN DREAM! pic.twitter.com/HI30nojsGo

Using terms from previous speeches on the tax plan, Trump said the plan would be a “middle class miracle” and presents a “once-in-a-generation opportunity to revitalize our economy.”

“The Heritage Foundation can once again help make history by helping to take this incredible idea,” Trump said. “This proven idea, this tax cut, making it a reality for millions and millions of patriotic Americans.”

Trump talked about the bipartisan deal with Sens. Lamar Alexander, R-Tenn., and Patty Murray, D-Wash., to continue subsidies for Obamacare for two years, but warned Democrats to fix what he has called an unworkable plan.

“I’m pleased the Democrats have finally responded to my call for them to take responsibility for their Obamacare disaster and work with Republicans to provide much-needed relief to the American people,” Trump said. “While I commend the bipartisan work done by Senators Alexander and Murray—and I do commend it—I continue to believe Congress must find a solution to the Obamacare mess instead of providing bailouts to insurance companies.”

Trump said Americans “must hold fast” to its tradition as a “nation of laws” by respecting law enforcement. He also defended symbols of history.

“Now they’re even trying to destroy statues of Christopher Columbus. What’s next?” Trump asked. He added, “We believe that our great American flag should be treated with reverence and respect.”

He praised The Heritage Foundation’s role in preserving history, and noted the organization’s influence in his biggest success, the nomination and confirmation of Justice Neil Gorsuch to the Supreme Court.

“We are strengthening our own freedom by appointing judges to the bench that will support and defend the Constitution of the United States,” Trump said.

He also talked about the achievements of his administration’s deregulatory agenda.

“Our regulatory reductions will put more Americans back to work and more lobbyists out of work,” Trump said.