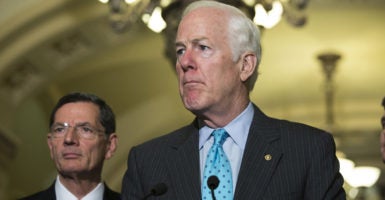 It was Sen. Bernie Sanders, I-Vt., who launched a broadside against President Donald Trump’s budget nominee over religious views, but it’s the No. 2 Republican in the Senate who is blocking the nomination of Russ Vought from coming to the floor for a vote.

Senate Majority Whip John Cornyn, R-Texas, seemed to clarify in a tweet Friday that it isn’t personal against Vought, who Trump nominated to be the deputy director of the Office of Management and Budget.

Rather, Cornyn just wants more federal dollars for his state, which was hit by Hurricane Harvey this summer.

Solely to ensure the next #Harvey aid request from OMB will satisfy Texas’s needs IDed by @GovAbbott @tedcruz & me https://t.co/HIn4qWU3Z0

Sen. Ted Cruz, R-Texas, joined Cornyn and Texas Gov. Greg Abbott in a bipartisan, bicameral letter asking for $18.7 billion in hurricane aid. However, Cruz is not joining in the effort to hold, and supports the Vought nomination.

The administration welcomes a conversation with all members of Congress about the next disaster relief request, which we expect to come in the coming weeks. While we work with Congress on that next request, we urge the Senate to keep doing their jobs by confirming qualified nominees to crucial positions inside our government. This administration has already faced unprecedented obstruction of its nominees.

Absolutely not, Senator. I’m a Christian, and I believe in a Christian set of principles based on my faith. That post, as I stated in the questionnaire to this committee, was to defend my alma mater, Wheaton College, a Christian school that has a statement of faith that includes the centrality of Jesus Christ for salvation.

Sanders cut off Vought and went on to say he “is really not someone who this country is supposed to be about.”