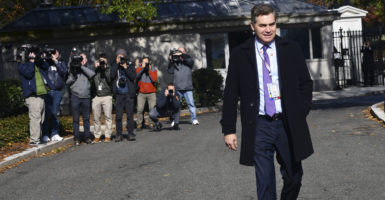 CNN reporter Jim Acosta is back in the White House, and the Trump administration is working on rules for “decorum” during press conferences.

U.S. District Judge Timothy Kelly, of the District of Columbia, granted CNN a temporary restraining to halt the Trump administration from blocking Acosta’s access to the White House, and ordered his press pass to be returned.

Asked what he meant about rules, Trump said, “decorum.”

“You can’t take three questions and four questions. You can’t stand up and not sit down,” Trump said. “We want total freedom of the press. It’s more important to me than anybody would believe. But you have to act with respect when you’re at the White House, and when I see the way some of my people get treated at news conferences, it’s terrible. So we’re setting up a certain standard, which is what the court is requesting.”

The judge, who was appointed by Trump, cited the 1977 D.C. Circuit Court of Appeals ruling in the case of Sherrill v. H. Knight, which determined a press pass can’t be revoked for arbitrary or “less than compelling reasons.” Kelly noted that the White House did not provide a reason about safety or security in denying the pass.

In a packed courtroom Friday, the judge determined that Acosta, as CNN’s chief White House correspondent, faced “irreparable harm” from being unable to access the building.

Kelly stressed the “very limited nature of today’s ruling,” adding that he has “not determined a First Amendment interest” as of yet, which is part of the CNN litigation. Rather, he was only addressing CNN’s Fifth Amendment argument on due process.

He further said he was not addressing the plaintiff’s argument about viewpoint discrimination, but was only ruling that the White House should immediately reinstate Acosta’s credentials, and they should remain reinstated for the duration of the litigation.

Both sides will be back in court next week. The judge ruled on a motion from CNN to restore the pass that allows Acosta to enter the White House for the duration of the lawsuit.

In a public statement, CNN stressed it is looking at the next step in the litigation.

“We are gratified with this result and we look forward to a full resolution in the coming days,” the CNN statement said. “Our sincere thanks to all who have supported not just CNN, but a free, strong and independent American press.”

Statement from CNN and @Acosta on today’s ruling: “We are gratified with this result and we look forward to a full resolution in the coming days. Our sincere thanks to all who have supported not just CNN, but a free, strong and independent American press.”

Meanwhile, the White House seized on the judge refraining from ruling yet on the First Amendment argument.

“Today, the court made clear that there is no absolute First Amendment right to access the White House,” White House press secretary Sarah Huckabee Sanders said in a statement. “In response to the court, we will temporarily reinstate the reporter’s hard pass. We will also further develop rules and processes to ensure fair and orderly press conferences in the future. There must be decorum at the White House.”

The long feud between CNN and the Trump exploded after a testy exchange during a presidential press conference the day after the midterm election. After addressing a question, Trump refused to answer more Acosta questions and tried to move onto another reporter, but Acosta initially refused to give up the microphone to a White House intern who tried to take it.

The Media Research Center, a conservative media watchdog group, was dismissive of the claim of a First Amendment right to a White House pass early on.

“This isn’t a major victory, just as withdrawing the pass wasn’t a major loss,” Tim Graham, director of media analysis at the Media Research Center, told The Daily Signal. “CNN during this whole time hasn’t been truly impaired, since there they have a stable of White House reporters and producers. They’re rearranging the deck chairs on a big fat yacht of liberal bias.”