Should Trump Nix the Iran Deal? 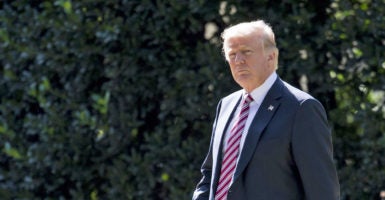 President Donald Trump is expected to give a major policy speech laying out official policy on the Iran nuclear deal. (Photo: Kevin Dietsch/UPI/Newscom)

President Donald Trump has made it clear that he does not like the flawed and risky 2015 Iran nuclear agreement that he inherited from the Obama administration.

He called it one of the worst deals ever negotiated during the presidential campaign and declared it to be an “embarrassment” in his speech to the United Nations General Assembly last month. When asked what he will do about it, he said, “I’ll let you know.”

The White House has tentatively scheduled a major speech for Thursday that is expected to outline its official policy on the nuclear deal.

The administration faces an Oct. 15 deadline for certifying the Iran nuclear agreement, which is required every 90 days under the Iran Nuclear Agreement Review Act of 2015.

After the State Department twice certified the agreement in order to meet 90-day deadlines earlier this year, Trump indicated that he was reluctant to do so again.

And it is impossible to see how he could do so. Iran has proclaimed that it will not permit inspections of its military bases, which are both permitted and essential under the nuclear deal.

This is a far cry from “transparently, verifiably, and fully implementing” the nuclear agreement, as stipulated under the Iran Nuclear Agreement Review Act.

Moreover, that law obliges the State Department to also certify that it is in the vital national security interests of the United States to continue suspending nuclear sanctions on Iran, as required under the nuclear agreement.

It is increasingly difficult for the State Department to convince the president that it is vital to the national security interests of the United States to continue granting billions of dollars of sanctions relief to a rogue regime that orchestrates chants of “Death to America.”

All of these actions violate the spirit, if not the letter, of the nuclear agreement. It is therefore likely that the president will decide to refuse to certify the nuclear deal.

Nix It or Fix It?

Decertification would not automatically abolish the nuclear deal, but would set the stage for Congress to review the agreement. Congress would then have 60 days to debate whether to restore nuclear-related sanctions lifted by the nuclear deal.

But before that debate begins, the Trump administration must decide whether to walk away from the agreement or seek to correct its flaws through further negotiations.

Walking away from the agreement could allow Iran to have its cake and eat it, too. Tehran would be relieved of future obligations under the deal, after pocketing many of its benefits in terms of front-loaded sanctions relief.

Washington could reimpose U.S. sanctions, but would not be able to count on the U.N. Security Council to reimpose and enforce U.N. sanctions unless Iran was found to be in material breach of the agreement.

The United States should also push for an inspection of the Parchin military base, where Iran was suspected of conducting illicit work to advance a nuclear weapons program. If Iran defiantly blocked international inspectors from verifying its compliance with its nuclear commitments, then U.N. sanctions would snap back.

Another option would be to try to renegotiate the agreement. The administration could request that Congress hold off on reimposing nuclear-related sanctions for a defined period of time until it became clear whether fixing the nuclear deal is even possible.

This clearly would be an extremely difficult proposition. Tehran has refused to consider any renegotiation. But, once the administration has decertified the deal and Congress is poised to reapply sanctions, Tehran may reconsider its refusal to renegotiate.

Work With Congress: Don’t Punt on the Nuclear Issue

Sen. Tom Cotton, R-Ark., a leading congressional critic of the nuclear deal, has advocated that the administration work with Congress to fix the agreement:

What the president should do at this point is outline the parameters of new legislation that he would like to see to greatly strengthen the Nuclear Agreement Review Act to fix some of the problems with the [nuclear deal], while also making it clear to Tehran, and to Europe and Asia, that the sword of Damocles of complete economic sanctions hangs over Iran’s regime to be implemented at any moment by him unilaterally.

To further enhance its diplomatic bargaining leverage, the administration could ask Congress to authorize the use of military force as a last resort if necessary to prevent an Iranian nuclear breakout.

But renegotiating the nuclear agreement would be worthwhile only if it permanently barred Iran from acquiring nuclear weapons and removed the sunset provisions in the current agreement that allow key restrictions on Iran’s uranium enrichment program to expire after 10 years.

At a minimum, this would require:

Attaining a nuclear agreement with Iran along these lines may not be possible. But the president should make it clear in his speech that Iran will be responsible for the demise of the nuclear agreement if it continues to block inspections of its military bases and reject further negotiations.