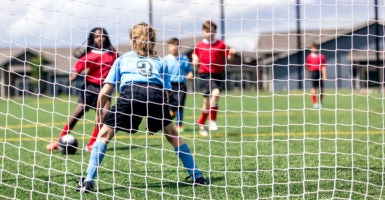 "Transgender-inclusive sensitivity for athletes is being made way more complicated than it need be," Howard Hart Jr. writes. (Photo: Stock/Getty Images)

Editor’s note: We’re back with another batch of your emails on our coverage of the nation’s policy debates. Got a point to make? Write to letters@dailysignal.com.—Ken McIntyre

Dear Daily Signal: Kelsey Bolar’s treatment in her video report of the issue of transgender athletes in girls sports is more in depth than a previous article I read on the same subject (“8th Place: A High School Girl’s Life After Transgender Students Join Her Sport”).

Transgender-inclusive sensitivity for athletes is being made way more complicated than it need be. The solution to the problem, without disrespect or inequality, is as plain as the nose on the faces of those who champion this movement.

For any athlete convinced of being transgender, create a new class of athletes: transgender. Or perhaps pangender.

To make certain it is equal and inclusive, allow everyone and anyone to compete in this class, with or without counseling, hormone therapy, or reassignment surgery. Additionally, those athletes who identify as gender-fluid could enter and exit the class at will, without need of special permission or documentation.

All things being equal anyway, a pan- or transgender class invites—civilly, neatly, positively, respectfully, and sensitively—anyone and everyone who desires to join or leave the class, dependent on how they feel and view themselves on any given day.

No need to amend the U.S. Constitution, or those of states, or to draft and enact laws in the interest of equality.—Howard J. Hart Jr.

Dear Daily Signal: If men continue to be allowed in women’s sports, we might as well change all sports to “people’s tennis, people’s cross country, people’s swimming,” etc., and set the world back to 200 years ago when no women competed in any sport.

I’m angry that men who think they’re women are allowed to call themselves women so they can compete against women born as female, not born as male.—Joyce Mathews

This comment is on the article “The 2010s: A Decade of Marital and Sexual Erosion,” by Ryan T. Anderson: The one “right” that the Supreme Court can’t grant to homosexual couples is the right of those couples to have children the natural way.—Merwin Hayes, Rawlins, Wyo.

Schools would offer one team in each of their sports programs, and everyone would have an equal opportunity to make that team. Men would dominate almost every team. This should be a major reason to vote against the Equal Rights Amendment.—Russ Sloan

Dear Daily Signal: I am a fan of commentator Jon Caldara, but if he hadn’t publicized the column that got him fired from The Denver Post, I would not have seen it (“Social Liberal Is Silenced Over Belief That There Are ‘Only 2 Sexes’”).

For about a decade, I subscribed to The Denver Post knowing that it was a rather leftist paper. When I was charged $600 for my one-year subscription, I grumbled but paid it.

The next year the cost was going to be $700. I canceled, discovered I could live without the shrinking leftist paper, and decided the internet could provide me with most of the news I want.—Irene Eggers, Wheat Ridge, Colo.

Dear Daily Signal: The words we use to label or describe elements of our society will shape or control the perceptions of those to whom we speak.

Please do not use the term “sanctuary” to describe those jurisdictions where people seek to affirm the constitutional strength and legality of our Second Amendment (“Virginia Gun Control Bills Firing Up Second Amendment Backers”).

Indeed, there are “immigration sanctuaries” fromenforcement of the law of the land, as the resistance to immigration law has unlawfully claimed.

Instead, we want to have “Second Amendment strongholds” for enforcement of the national law of the land, as patriotic supporters of our Constitution are entitled.

I implore you to begin to speak about jurisdictions that are Second Amendment strongholds of continued enforcement of the Constitution, which established our legal right to bear arms, and in no way infringed.

Remember, a sanctuary is a place different than all that is outside it. A stronghold is a place the same as the land it represents outside its particular territory.

As an attorney, speech and sociology major, and communications instructor, I fully understand how words are used to propagandize the electorate. We must fight back by choosing the words that best represent the truth and lawfulness of our position. It is not propaganda.

I am happy that Virginians are choosing to establish Second Amendment strongholds that will not avoid enforcement of the national law but, instead, reaffirm its strength everywhere.—Dominic DeSandro, San Diego, Calif.

Dear Daily Signal: Nolan Peterson’s article, “Why It Looks Like Iran Shot Down Ukrainian Airliner,” is full of anonymous and unauthorized comments from U.S. military personnel.

Patriots in this country are becoming increasingly sick of “anonymous sources” used by the news media, and we don’t condone it. It’s clear from the article that many of these people were not authorized to speak by military higher-ups, and therefore they should not have been used as sources.

Otherwise, it makes The Daily Signal no better than the fake news media that consistently relies on fake and treacherous anonymous sources to lie to Americans. I expect and demand better from The Heritage Foundation.—Ellen K. Rudolph

Thanks for writing, Ellen. We share your concern about overreliance on anonymous sources by today’s news media. We not only have reported and commented on the danger of this trend, but enforce a policy of limiting use of anonymous sources. Our editor-in-chief must authorize inclusion of such sources in our coverage, and they are rare. In the case of the airliner crash in Iran, we decided that Nolan Peterson’s knowledgeable sources brought insights that we otherwise could not offer.

I thought that this would have been settled when the Supreme Court decided that religious schools could get government funds, but the money couldn’t be used for teaching religion?—Ken Yarcho

Elizabeth Slattery offers this reply: “The Montana case is different from the Missouri case in 2017 because Montana’s state Legislature originally allowed scholarship funds to be used at religious schools, but then a state court incorrectly ruled that excluding religious schools was consistent with the U.S. Constitution. Its solution was to eliminate the entire scholarship program. Montana argues that getting rid of the scholarship program got rid of the constitutional problem.“

Dear Daily Signal: The Daily Signal is such a great source of unbiased news, and I look forward to your articles.

I have been contacted about giving, and at some point I hope I can invest in this worthwhile publication. Thanks to all the contributors for their dedication to truth.—Lynn Moore

Could you advise young Americans to read the book “The Black Book of Communism” by Stéphane Courtois?

By now, people don’t remember what socialism really was. Do everything in your power to inform all Americans, especially young people, but also minorities.—Lorenzo Cardinali

We’re trying to do that, Lorenzo. Our Jarrett Stepman writes regularly about the threat of socialism, and, in a guest column early last year, former White House aide Sebastian Gorka cited the book you mention (“The Difference in How Socialism and Free Markets Work in the Real World”).

Thanks to Fred Lucas for the excellent summaries of the Senate impeachment trial.—Philip G. Daspit

You’re welcome, Philip. Fred’s succinct reports on the trial consistently have been among our most popular offerings.