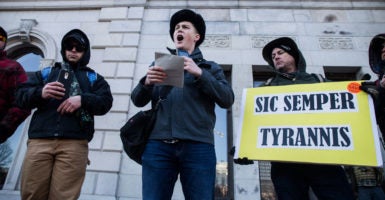 Proposed gun control legislation in the Virginia General Assembly has many Second Amendment advocates in the state literally up in arms, prompting strong pushback from gun rights groups and firearms owners.

Groups including the Virginia Citizens Defense League, a pro-Second Amendment nonprofit organization, and the National Rifle Association are taking the lead in opposing enactment of a package of eight gun control measures being pushed by Virginia Gov. Ralph Northam, a Democrat, in the Democrat-led Legislature.

To protest those measures, thousands of gun rights advocates gathered Monday at the state Capitol in Richmond for the Virginia Citizens Defense League’s Lobby Day.

In addition to lobbying against the bills, gun rights activists are leading efforts to encourage local government jurisdictions and officials to protect Virginians’ gun rights by declaring themselves Second Amendment “sanctuaries” and announcing their intention to refuse to enforce any state gun measures that are passed that they deem unconstitutional.

The Supreme Court has held that the Second Amendment protects the right of law-abiding Americans to keep and bear arms commonly used for lawful purposes.

After capturing control of the Virginia General Assembly in the November elections, Democratic lawmakers began crafting gun control bills. They include Senate Bill 70, which passed in the state Senate, mostly along party lines, on Jan. 16.

The bill requires universal background checks, except for firearms transfers that occur between family members, at lawful firearms shows, within a buy-back or give-back program, in any area designed for target shooting, certain temporary transfers, and in certain other circumstances.

But a 2019 study by the federal Justice Department found that most criminals don’t obtain their guns through lawful channels. That buttresses the notion that universal background checks aren’t addressing the real problem, and thus are unlikely to have any meaningful effect on the rates of gun-related crime or deaths, according to Amy Swearer, a senior legal policy analyst in the Meese Center for Legal and Judicial Studies of The Heritage Foundation.

The Virginia Senate also passed Senate Bill 35 and Senate Bill 69 on Jan. 16, both by 21-19, entirely along party lines. The bills involve the designation of “gun-free zones” in and around public buildings and parks, and reinstituting a one-gun-a-month purchase limit that was repealed in 2012, respectively.

A third bill, Senate Bill 240, involves so-called red flag gun-confiscation orders. Such orders apply to those who a court has deemed to be a threat to himself or herself or to others, for a fixed amount of time.

On Tuesday, just one day after the massive pro-Second Amendment rally at the Capitol, the Senate gave it preliminary approval, and on Wednesday, gave it final approval, again on a 21-19 straight party-line vote.

The NRA has been actively lobbying against these and other bills by mobilizing its members and others to defeat what the gun rights group calls Northam’s “gun-confiscation scheme.”

“Gov. Northam and out-of-state billionaire allies are working to pass the strictest gun control laws in the nation, and turn hundreds of thousands of law-abiding Virginians into felons,” NRA spokeswoman Catherine Mortensen said. “We look forward to educating the public and members of the media on our positions.”

The NRA has spent the past several weeks informing Virginia residents about the gun control  measures, urging them to contact their lawmakers in opposition to the bills. And in at least one case, it appears to have worked, Mortensen said.

On Jan. 13, Virginia Senate Majority Leader Richard Saslaw withdrew Senate Bill 16, which Mortensen said was “the most offensive bill” to the NRA, from Senate consideration. It would have prohibited the sale, transport, possession, transfer, and manufacturing of so-called assault weapons.

Those types of semi-automatic firearms, often demonized by gun control proponents, are owned by millions of American citizens and are responsible for only a fraction of gun deaths, Swearer said.

The Virginia Citizens Defense League is leading the Second Amendment sanctuary movement in the state. As of Jan. 16, 136 counties, cities, and towns, covering an estimated 90% of the state, have passed resolutions declaring themselves sanctuaries.

One retired law enforcement officer, Bob Chauncey, has taken to Twitter to criticize the gun control bills. He described the current actions being taken by the governor and General Assembly as “taking our Second Amendment.”

That type of reaction, Swearer says, is an indication of a concerned citizenry. In other states with strict gun controls, such as New Jersey and California, compliance rates have been low. The state can pass laws, but it must rely on local police and sheriffs to enforce them.

“’Gun-free’ doesn’t save lives, but carrying can and does stop crimes,” Chauncey said. “The right to have and bear [arms] is a constitutional right.”