Why Gun Control Is Wrong Response to Tragic Virginia Shooting 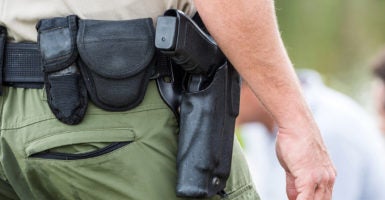 In the wake of the tragic shooting in Virginia Beach, Virginia, that claimed the lives of 12 people, Gov. Ralph Northam has called for a special legislative session to address gun-related violence.

Using the shooting as a call to action, he then proposed a variety of restrictions on lawful gun owners—not one of which would have prevented or even mitigated the very shooting used to justify them.

Northam’s proposals show a deep misunderstanding of the causes and mechanisms underlying gun-related violence in general, and mass public shootings in particular.

Worse, they inherently place the blame for these criminal actions on the shoulders of hundreds of thousands of law-abiding Virginia gun owners who will never use their firearms in an unlawful manner.

In fact, Americans use guns in self-defense far more often than criminals use them to kill or injure others.

A 2013 report by the Centers for Disease Control and Prevention concluded that studies routinely show that Americans use guns to defend themselves or others between 500,000 and 3 million times every year. Data collected by the CDC itself, which it long declined to publicize, indicates that the number of annual defensive gun uses is likely around 1 million.

This hardly comes as a shock to most lawful gun owners, who know that the right to keep and bear arms is the best—and sometimes the only—recourse against immediate threats to life, liberty, and property. Consider the following recent examples, none of which received significant national attention.

On April 1, a domestic violence incident in Idaho ended badly for the male abuser after his female victim shot him in the face. The man survived and now faces charges of domestic battery and attempted strangulation.

On April 8, an elderly Chicago homeowner found three men using a crowbar to break into his home. When one of the robbers raised the crowbar to smash the glass door, the homeowner shot him, sending all three would-be intruders scattering. The homeowner told reporters that he “didn’t feel good” about shooting at someone, but “he would have gotten me with the crowbar.”

On April 16, in Hampton, South Carolina, a homeowner was forced to rely on his Second Amendment rights to defend himself against two men who broke into his home. He lived less than a block away from the local police department, but that wasn’t close enough to ensure his personal safety.

On April 22, a homeowner in White Center, Washington, shot and killed an intruder who broke into his home in the early morning hours. The 911 recording catches the details of the harrowing seven-minute wait between when the homeowner was forced to defend himself and the arrival of law enforcement.

On May 9, a concealed carry permit holder in Huntsville, Alabama, successfully defended himself and his mother from two armed robbers outside a grocery store. One of the robbers pointed his gun at the permit holder’s mother, at which point the permit holder drew his own firearm and shot the man. The robbers fled in a stolen vehicle and were later apprehended by police.

On May 14, a Tallahassee, Florida, man used his rifle to fend off four armed assailants who had stolen his keys and broken into his home. In the ensuing gun battle to defend his life and property, he fired nearly 25 rounds, wounding two of the assailants and causing the others to flee.

Of course, none of these lawful gun owners wanted the day to come where they would be forced to rely on their Second Amendment rights to protect themselves or others. The decision to shoot another human being—even in lawful self-defense—will often be the hardest moment in a gun owner’s life.

But the data is very clear that these moments happen, and they happen often.

We don’t make law-abiding citizens safer by advocating restrictions that make it more difficult for them to defend their inalienable rights, particularly when the restrictions don’t meaningfully address the real mechanisms of criminal gun use. We simply tie one hand behind their backs, while at the same time congratulating ourselves for having “just done something” about gun violence.

In reality, the only thing we’ve done is handicap them in the same fight against the same opponents who continue to break the same rules.