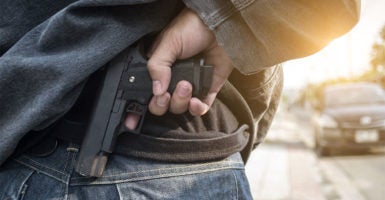 As we enter 2020, lawmakers in several states are gearing up for high-profile fights over gun control legislation that could severely limit the Second Amendment rights of many law-abiding citizens.

This makes it all the more critical that we continue to emphasize the important role lawful gun owners play—not just as a long-term protection against tyrannical government, but as an immediate and regular defense against crime.

As we have regularly noted, a 2013 report by the Centers for Disease Control and Prevention concluded that almost all major studies on defensive guns uses have found that Americans use firearms defensively between 500,000 and 3 million times every year.

The vast majority of these defensive gun uses receive little or no media attention.

Over the course of 2019, we brought to readers’ attention several dozen examples of Americans relying on their Second Amendment rights to protect life, liberty, and property. (You can read past articles here: January, February, March, April, May, June, July, August, September, October, and November).

The year ended just as it began, with plenty of other examples of law-abiding citizens using their firearms to defend themselves and others.

There are two important lessons to draw from these year-end examples of armed civilians protecting the inalienable rights of themselves and those around them.

First, Wilson’s heroism in particular shows the importance not just of having access to firearms, but of being well-trained with those firearms. Wilson has been roundly praised for showing tremendous poise under the gravest of circumstances and was recently awarded the Governor’s Medal of Courage—Texas’ highest civilian honor—for his lifesaving actions.

That poise and marksmanship did not manifest itself out of thin air. It was the result of regular training to hone his skills and of planning the actions he would take under extreme duress.

The Second Amendment protects the rights of all law-abiding citizens, not just those who meet a certain level of proficiency. But responsible gun owners should make a habit of training themselves in the use of their firearms. You never know when your life or the lives of others may depend on your ability to confidently end a threat.

Second, although Wilson deserves the attention and honors bestowed on him, there are countless other lawful gun owners who take heroic actions every day, protecting themselves and their communities from would-be criminals. You don’t know their names, and you’ve probably never seen their faces on the news.

But they are there, and we will continue to tell their stories.