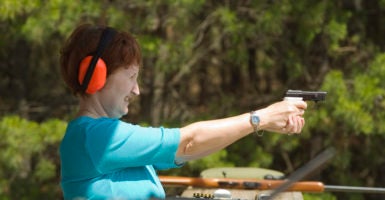 As lawmakers around the country moved to impose restrictions on the ability of law-abiding Americans to keep and bear arms, some of those same citizens spent the first month of 2019 proving that armed civilians play an important role in defending the inalienable rights to life, liberty, and property.

Gun ownership surveys routinely find that about 1 in 3 American adults personally own firearms, meaning that tens of millions of law-abiding citizens regularly choose to exercise their Second Amendment rights.

Recent surveys indicate that 60 percent of these gun owners possess firearms primarily to protect themselves and others from crime.

These concerns are not misguided. A 2013 report from the Centers for Disease Control and Prevention authorized by the Obama administration examined comprehensive studies of defensive gun use. It concluded that Americans use their firearms in defense of themselves or others between 500,000 and 3 million times every year.

The month of January was replete with highly publicized examples of these defensive uses of guns:

On any given day, law-abiding citizens answer their front doors, eat at restaurants, go grocery shopping, ride public transportation, and, more often than all of these, go to bed in their own homes.

They have the natural right of self-defense in all these scenarios. But without the necessary tools for enforcement, the unalienable rights to life, liberty, and property are little more than words.

The exercise of Second Amendment rights in defense of self or others is not a rare or extraordinary event, but a daily occurrence in the lives of ordinary Americans doing ordinary things.

Additional examples have been added to this article since publication.