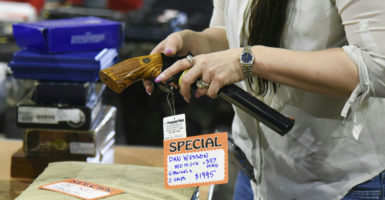 Eve Silverbach, at her "concealed carry purses" booth, shows how a revolver fits in a handbag on Feb. 16, 2018, before the opening of the South Florida Gun Show at the Dade County Youth Fairgrounds in Miami. (Photo: Michele Eve Sandberg / AFP/Getty Images)

Gun control advocates long have controlled the narrative about defensive uses of firearms, calling the “good guy with a gun” scenario a “myth meant to scare people into buying guns for self-defense.”

This is a false narrative that does not reflect reality.

Despite a backdrop of rhetoric asserting that “the average person … has basically no chance in their lifetime ever to use a gun in self-defense,” the Centers for Disease Control and Prevention in a 2013 report concluded that studies routinely find that Americans use firearms in defense of themselves or others between 500,000 and 3 million times every year.

Data collected by the CDC itself, but long hidden from the public, indicates that the number is likely around 1 million defensive gun uses per year. But even the lowest end of this statistical range far outpaces the number of times Americans use firearms for unlawful purposes.

It’s one thing to hear that incredible number and know that the “good guy with a gun” is not a myth. It’s another thing entirely to dig deeper into the firsthand accounts of individual law-abiding Americans whose lives and livelihoods were saved because they were able to exercise their Second Amendment rights.

In each of the first two months of 2019, we shed light on the stories of defensive gun use that too rarely make local—much less national—headlines.

Our research shows that March was no different in terms of armed, everyday citizens defending their inalienable rights against criminals, many of whom were armed with unlawfully possessed deadly weapons.

Here are just a few of these “no chance in a lifetime” cases, based on police accounts:

—March 2, Los Lunas, New Mexico.  A homeowner, responding to knocking at his door, was confronted by two individuals, one holding a knife and the other a baseball bat. They forced their way in and demanded money. The homeowner was able to retrieve his firearm, then shot and wounded both intruders, who collapsed outside and were arrested.

—March 3, Cleveland. Two armed men wearing hoodies to conceal their faces entered a deli. One men tried to force his way behind the counter while the other yelled at the owner to open the cash register. The owner pulled out his own firearm and shot at the men, sending them running. The deli was open for business the next day, with the owner telling local media: “I have been here for 40 years, and I’m not going anywhere.”

—March 7, Caro, Michigan. A man in violation of probation was trying to break into a car when he was stopped by the car’s armed owner. The would-be thief—already convicted of third-degree home invasion in 2016—was arraigned on 20 different counts, including attempted murder.

—March 10, Chicago. A woman shot a man in self-defense after he began physically assaulting her, breaking her hand and covering her body in cuts and bruises.

—March 11, Grants Pass, Oregon. A man forced his way into his ex-girlfriend’s home and cornered her in the bedroom with her son. The woman, who had called 911 before to report the man for entering her home and threatening her, fired her gun at him in fear for her life and that of her son. The man, hospitalized with non-life-threatening injuries, was charged with assault and menacing.

—March 12, Harris County, Texas. Four masked men were in the process of robbing a physical therapy office when an employee with a concealed carry license drew his gun and fired at them, wounding one. The three others fled. One female patient was injured by the robbers, but the situation could have been much worse.

—March 13, Germantown, Tennessee. A customer at an auto parts store got into an argument with a clerk and left only after discovering the clerk had a gun on his person. Later that afternoon, the clerk saw the customer returning to the store armed with a shotgun. Fearing for his safety and that of others inside the store, the clerk fired at the man through the store window, striking him in the chest. Critically wounded but out of the hospital a week later, the man was charged with aggravated assault and unlawful possession of a firearm.

—March 14, Philadelphia.As Elvis Nuñez was closing his store, a masked man entered and pointed a gun at him. Nuñez complied with the man’s demands to open the cash register, but the robber fired a round at him anyway. He missed, and Nuñez was able to draw his own handgun from a hip holster. After an exchange of gunfire, the man ran wounded from the store.

—March 18, Hoke County, North Carolina. Allen Thomas Jr. used his 12-gauge shotgun to scare away several people who unlawfully entered the townhouse he rents. Thomas is running for lieutenant governor of the state.

—March 22, Fillmore, Utah. A homeowner awoke to loud yelling outside his front door. He grabbed his firearm and opened the door, where an ax-wielding man under the influence of drugs confronted him. Seeing that the homeowner was armed, the intruder returned to his car and drove away. When he was arrested later, law enforcement officers said they found five knives, two hatchets, and a can of pepper spray in his car.

—March 26, Indianapolis. An armed intruder wearing a tactical vest with the word “police” emblazoned on it tried to confine a homeowner and his family to one room. The homeowner pulled his own firearm and shot the intruder, who fled the house. He later was arrested and charged with false imprisonment and impersonating a public servant.

—March 28, Miami. When a woman he knew knocked on his door at 2 a.m., Pherrick Thomas thought it was safe to answer. Thomas was instead confronted by a man he had never met before who, armed with a rifle, attempted to force his way inside the home Thomas shared with his grandmother and great-grandmother. During a scuffle with the intruder, Thomas’ grandmother hit the man with a brick, giving Thomas time to take the man’s rifle and shoot him with it. A police officer responded to the gunfire and arrested the man and woman, who now face armed robbery charges. Thomas told reporters that seeing the intruder hit his grandmother gave him the strength to shoot: “I felt like if I was to die right there, they would kill my grandmother and great-grandmother, Lord forbid—God forbid.”

Most lawful gun owners pray that they never will be in a situation where they have to point a firearm at another human being, much less pull the trigger. But as these police reports show, those moments do occur, and it is better to be prepared than to be defenseless against those who care nothing for the rights of others.

The “good guy with a gun” does indeed exist, whether that good guy be law enforcement officers or armed civilians who exercise their natural right of self-defense when law enforcement can’t be there quick enough to intervene.

And we fully intend to keep giving those good guys with guns the recognition they deserve.