Lawful Gun Owners Defended Their Lives and Livelihoods in August 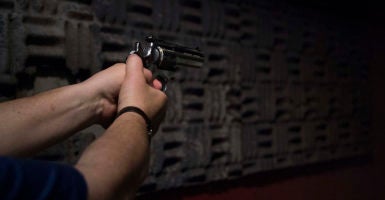 America is currently in the midst of a decade of historically low rates of violent crime, including gun-related crime, but Americans still use their firearms to defend themselves between 500,000 and 3 million times every year. (Photo: Jim Watson/AFP/Getty Images)

It seems as though every day another celebrity or politician demands that we place more severe restrictions on the ability of law-abiding citizens to exercise their constitutional right to keep and bear arms.

Unlike many of these celebrities and politicians, most of us do not live in safe, gated communities or spend much of our day protected by professional armed security.

Our deep respect for law enforcement does not negate the fact that police officers do not serve as our private protection details, and cannot always be there to assist us in moments of serious danger.

America is currently in the midst of a decade of historically low rates of violent crime, including gun-related crime, but Americans still use their firearms to defend themselves between 500,000 and 3 million times every year.

This is not just some conservative talking point, either, but a reality that the Centers for Disease Control and Prevention, in a 2013 report, concluded has been found “by almost all major studies” on the issue.

Moreover, while the Second Amendment right to keep and bear arms does not depend on a balancing test between criminal and lawful uses of firearms, law-abiding citizens use firearms for lawful purposes far more often than criminals use them to commit crimes.

Every month this year, we’ve highlighted just a handful of the numerous times that law-abiding Americans have exercised their Second Amendment rights in defense of themselves or others. Just like January, February, March, April, May, June, and July, August was full of examples of how the right to keep and bear arms is essential to the protection of individual rights.

These examples show that when firearms are in the hands of law-abiding citizens, the public is more secure. When the Second Amendment is flippantly treated as an antiquated measure and serious burdens are placed on the right to keep and bear arms, the people with the most to lose are not criminals, but jewelry store owners protecting the family business and elderly Texans defending their wives during home invasions.

We all want safer communities, and everyone agrees that criminals or objectively dangerous people should not have access to weapons. For the ordinary Americans most likely to face these threats and least likely to live in gated communities or afford armed security, the right to keep and bear arms is not an abstract ideal. It is, rather, an important tool in an everyday battle to secure their rights against those who care little for the life, liberty, or property of others.