Trump Doesn’t Like So Many Anonymous Sources, and Neither Do These Journalism Experts 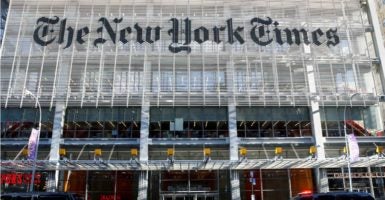 The use of anonymous sources in stories critical of the president have been under the Trump White House’s skin for some time. (Photo: Shannon Stapleton/Reuters/Newscom)

The use of anonymous sources in stories critical of the president have been under the Trump White House’s skin for some time, though Rick Edmonds, a media business analyst at the Poynter Institute, which studies journalism and the media, wasn’t sure there are more stories based on anonymous sources under Trump than past presidents.

“Anonymous sources are bad in theory, because generally, journalists should try to get people on the record,” Edmonds told The Daily Signal. “But sometimes that is the only way to get ledes and background. If a reporter stands on principle and says, ‘I will not do that,’ they will miss out on information.”

Edmonds said there is typically a different set of rules in Washington than at news outlets in other places.

Most of the anonymously sourced stories have been about alleged ties to Trump and Russia. Other frequent topics are about infighting in the White House.

During his speech in late February, at the Conservative Political Action Conference in Maryland, Trump went so far as to accuse the media of making up anonymous sources.

“I’m against people that make up stories and make up sources,” Trump said. “They shouldn’t be allowed to use sources unless they use the name. ‘A source says Donald Trump is a horrible human being.’ Let them say it to my face. There are some great reporters, honest, talented as the day is long. But also dishonest people doing a disservice to the country.”

The Society of Professional Journalists tightened the organization’s code of ethics in 2014 to dissuade the use of anonymous sources. It calls for journalists to “identify sources whenever feasible. The public is entitled to as much information as possible on sources’ reliability,” and to “always question sources’ motives before promising anonymity. Clarify conditions attached to any promise made in exchange for information. Keep promises.”

The Associated Press Stylebook lays out the parameters for using anonymous sources. The stylebook says:

Under AP’s rules, material from anonymous sources may be used only if:

The material is information and not opinion or speculation, and is vital to the news report.

The information is not available except under the conditions of anonymity imposed by the source.

The source is reliable, and in a position to have accurate information.

Reporters who intend to use material from anonymous sources must get approval from their news managers.

Explain in the story why the source requested anonymity. And, when it’s relevant, describe the source’s motive for disclosing the information.

The story also must provide attribution that establishes the source’s credibility; simply quoting a source is not allowed. Be as descriptive as possible about the source of information.

“If you have to attribute facts to an anonymous source to nail down the story, that is one matter,” Edmonds said. “What I dislike is opinion, simply pushing negative opinions and using anonymity as cover.”

A major problem with nameless, faceless sources is that the motives of the leakers for the anti-Trump stories “might be pure, or could be poisonous,” wrote Brent Bozell and Tim Graham, of the Media Research Center, a conservative media watchdog group. Regarding recent stories in The Washington Post, they wrote:

Earth to the Post: your new motto is ‘Democracy dies in darkness,’ but anonymous sourcing is darkness. Every source who hides behind a wall as he tries to ruin other people’s careers is a self-serving coward with a personal or political ax to grind. Without knowing an identity, the public has no way of telling … anything. It’s idiotic for the press to demand transparency in government at the exact same time it rewards government officials who refuse to be transparent themselves.

Journalists pat themselves on the back that they would never be ‘stenographers to power,’ but they’re worse than that now. In their zeal to destroy Trump, they’ve become stenographers to anonymous power.

The use of anonymous sources prompted controversy on the left and the right. In 2003, New York Times reporter Jayson Blair was fired for fabricating stories based in part on anonymous sources. Also, New York Times reporter Judith Miller came under heavy scrutiny for reporting—based largely on anonymous government sources—about Iraq’s weapons of mass destruction in the lead-up to the Iraq War.

Paul Steiger, a former managing editor of The Wall Street Journal and founder of ProPublica, noted that leaks are absolutely needed to get to the truth.

“It is not the publishing of these secrets that threatens national security. Publishing these secrets threatens the secret-keepers,” Steiger said. “It protects the public interest by letting us know what powerful people are doing when they think no one is looking … We need more journalists revealing more secrets, not fewer.”

Margaret Sullivan, a media columnist for The Washington Post and a former public editor for The New York Times, noted famous instances of anonymous source usage such as Edward Snowden and surveillance of Americans during the Obama administration, going back to the Pentagon Papers and Watergate during the Nixon years. Sullivan wrote:

In a government increasingly obsessed with secrecy, and guilty of rampant overclassification, leaks are necessary and, largely, a very good thing.

And although there are legitimate national security concerns in some cases, I’d far rather live in a leaky America than one sealed up tight—with whistleblowers and journalists behind bars.

Identifying sources is particularly important today when so many people are throwing around the phrase “fake news,” said Andrew Seaman, the Society of Professional Journalists ethics chairman.

“The public has the right to know as much as possible about a story, including the messenger, who should be identified,” said Seaman, a journalist with Reuters.

“Anonymous sources can be important, but journalists also need to be more aggressive and push a source to go on the record,” he said. “First ask, where else does this exist? It’s very rare that only one person knows about something in government.”

An example of using someone off the record to steer in the right direction would be the most famous anonymous source of all, Deep Throat of Watergate, who turned out to be the former No. 2 at the FBI, Mark Felt. He was never quoted in Washington Post stories by Bob Woodward and Carl Bernstein, but rather guided them on where to look. That said, the Watergate stories still included many other anonymous sources.

Ultimately, government officials at the highest levels have an obligation to be transparent, he said.

“An uptick in anonymous sources often happens as access becomes more scarce with shorter and fewer press briefings,” Seaman said. “If the administration wants to cut back on anonymous sources, they will be more transparent and open.”