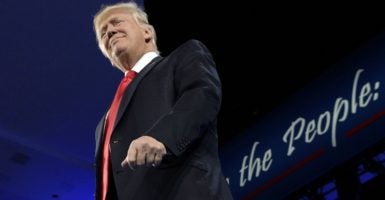 In a forum that sparked his political career, President Donald Trump said the Republican Party would be the “party of the American worker,” the news media “shouldn’t be allowed to use anonymous sources,” and the border wall is “way ahead of schedule.”

These were among the biggest ovation lines in remarks frequently interrupted by chants of “USA! USA!” as Trump spoke Friday at the Conservative Political Action Conference, or CPAC.

The president took the stage as Lee Greenwood’s song “God Bless the USA” played, returning to the annual gathering of conservative activists that gave him an early political boost.

Trump, in office just over a month, talked about the progress of his agenda, vowed to replace Obamacare, and stressed his commitment to rebuilding the military.

But he spent the early part of the address making it clear he would continue taking on the news media, calling some reporters “very smart, very cunning, and very dishonest.”

The president said he didn’t oppose a free press, but insisted there are many honest journalists and accused news organizations of using anonymous sources to fabricate news.

I’m against people that make up stories and make up sources. They shouldn’t be allowed to use sources unless they use the name. ‘A source says Donald Trump is a horrible human being.’ Let them say it to my face. There are some great reporters, honest, talented as the day is long. But also dishonest people doing a disservice to the country.

Trump said Sanders was correct on the issue of trade.

“We got a lot of Bernie supporters, so, actually, I like Bernie,” Trump said to laughter from the audience.

Friday’s address was historic since Trump became the first president since Ronald Reagan to address a CPAC audience during his first year in office. President George W. Bush was the last president to speak at CPAC, doing so in 2008, his final year in office.

“I wouldn’t miss a chance to talk to my friends,” Trump said, recalling: “I delivered my first major political speech at CPAC.”

He said he didn’t prepare much or speak from notes for that appearance, but got a big reaction, so he began to like politics.

Trump arguably laid the political groundwork for his presidential campaign at CPAC. In those remarks in 2011 in Washington, he first hinted at a presidential run in 2012—a campaign he didn’t launch.

“We will build the wall and we are going to start soon,” President Donald Trump says during remarks Feb. 24 at CPAC. (Photo: Jeff Malet for The Daily Signal)

On Friday, Trump made the case that border security is national security.

“We will build the wall and we are going to start soon, way ahead of schedule,” Trump said. He added: “We will stop the drugs from coming into our nation and poisoning our youth.”

He said he would rebuild the military after eight years of neglect and budget cuts during the Obama administration:

We will have a substantial upgrade for the military. It will be bigger and better and stronger than ever before, and hopefully we’ll never have to use it. No one will dare question our military might. We believe in peace through strength.

Regarding the terrorist army called the Islamic State, or ISIS, Trump said, “we will eradicate this evil from the face of the earth.”

The 9th U.S. Circuit Court of Appeals upheld the order, but White House press secretary Sean Spicer has said the administration will move forward in other ways to protect Americans from would-be terrorists.

Trump also pledged to tackle regulations to improve the economy, but with a twist: 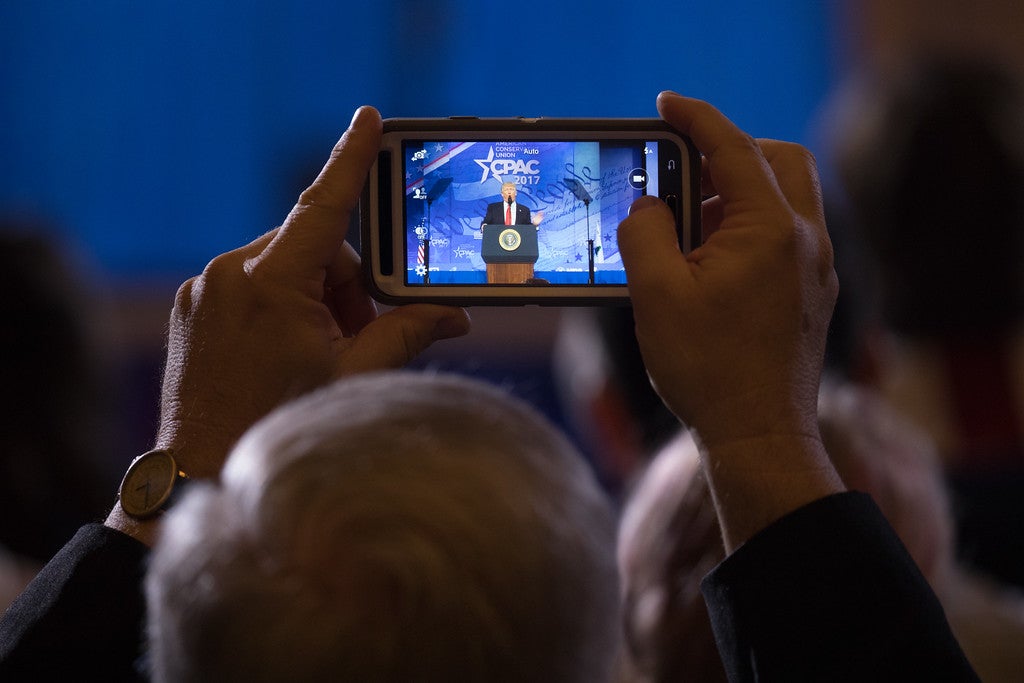 The president said that Obamacare was a failure and would be replaced with something “much better.” He talked about what he has told Republican leaders such as House Speaker Paul Ryan, R-Wis., and Health and Human Services Secretary Tom Price.

“I tell them from a purely political standpoint, the best thing we can do is let it implode. Democrats will come to us and beg for help,” Trump said. “But it’s not the right thing to do for the American people.”

Near the end of his remarks, Trump sounded a common theme from his campaign about putting America first.

“There is no such thing as a global currency or a global flag, this is the United States of America,” Trump said, as the crowd rose to again chant, “USA! USA!”