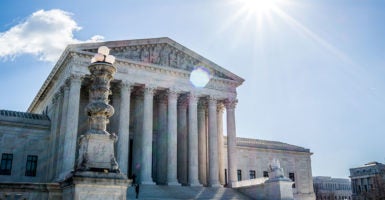 The Supreme Court heard oral argument Wednesday in an important case involving a Montana tax credit scholarship program that provided scholarships for underprivileged kids to use at private schools.

Parents who relied on the scholarship funds to send their kids to religious schools challenged the administrative rule for violating the religion clauses of the U.S. Constitution as well as the 14th Amendment’s equal protection clause.

The state’s highest court struck down the program in its entirety for violating the “no aid” provision in the state Constitution. Almost 40 states have similar provisions (sometimes called Blaine Amendments) that prohibit money from supporting “sectarian” schools.

As Justice Clarence Thomas explained in Mitchell v. Helms (2000), “[I]t was an open secret that ‘sectarian’ was code for ‘Catholic.’”

Here are five key exchanges from the argument.

1. Do the parents have standing to bring this challenge?

Justice Ruth Bader Ginsburg asked the first question, and she wanted to know why the parents have standing to bring this lawsuit in the first place.

In order to bring a lawsuit, the complaining party must have an actual injury, and Ginsburg asked if the case should have been brought by the religious schools or taxpayers who donate to the scholarship program and then receive a modest tax credit, instead of the parents.

Komer explained that the parents were the beneficiaries of the scholarship program.

Then, Justice Elena Kagan jumped in, asking, “[W]here is the harm in this case at this point?” She pointed out that no one will be allowed to use the scholarship funds (whether at secular or religious private schools), so where is the discrimination?

Komer replied that the discrimination occurred when the Montana Supreme Court invalidated the program in its entirety. He said, “[Y]ou can’t let the remedy shield the discriminatory judgment,” which was “mistakenly believing that this Blaine Amendment and the application of it did not violate the federal Constitution.”

Chief Justice John Roberts—back at the court after presiding over President Donald Trump’s impeachment trial until the early hours of the morning—returned to the issue when Wall stepped up to the lectern.

Wall explained that taking away the scholarship funds is a clear injury, and the parents have been penalized for their free exercise rights—not the schools’ right.

Wall said, “Everybody concedes that if all the parents in this program had wanted to choose secular schools, there’d be no basis for the state court’s ruling. The scholarship program would still exist.”

2. Are states required to give money to religious schools?

Justice Sonia Sotomayor asked if the parents believe the Constitution requires states to give money to secular and religious private schools.

Komer explained that states can choose whether or not they want to set up voucher programs, tax credit scholarships, or other school choice initiatives, but once they do, they can’t discriminate between parents who want to use those funds at secular and religious private schools.

He noted that states are not required to create these types of initiatives in the first place, but “if they give to one, they must give to the other.”

3. Will the court strike down all Blaine Amendments?

Sotomayor asked Wall if all state Blaine Amendments are unconstitutional. She went on for some time about “the long history of people [going back to the founding] who for non-discriminatory reasons … have taken the position that the state should not give money to religious institutions.”

Wall replied that what the founding era evidence actually shows is that forced support of churches was prohibited, and that’s different from denying a “generally available benefit … to an institution [or individual] based on its religious character.”

4. Does eliminating the program eliminate the constitutional violation?

Justice Brett Kavanaugh asked Unikowsky if it would be constitutional to allow scholarship funds to be used at secular and Protestant schools but not Jewish, Catholic, or any other religious schools.

Unikowsky said the “right lens to look at … is the establishment clause, which prohibits the state … from distinguishing between one religion versus a different religion.”

Kavanaugh followed up, asking why giving scholarships to use at secular schools but not at religious schools is not discrimination. Unikowsky said there’s a “principled objection to funding of religious institutions,” but also that “coercing people [to use funds at secular schools] is a penalty on religion” and to balance the interests, the Montana court “simply level[ed] down” and eliminated the scholarship program.

He reiterated that the Montana Blaine Amendment is not based on “religious bigotry,” but Kavanaugh replied that these amendments were “certainly rooted in grotesque religious bigotry against Catholics. … That was the clear motivation for [Montana’s amendment.]”

5. How does this compare to other types of discrimination?

Justice Samuel Alito posed a hypothetical about a scholarship program where most of the recipients ended up being black. Would it be discrimination to strike the whole program down for that reason?

Unikowsky agreed that would be discrimination, but responded that race and religion are not “identical for all constitutional reasons.”

Wall addressed this issue in his opening, saying, “If the Montana Supreme Court had invalidated this program because it included historically African American schools or all-girls schools, that would be a straightforward equal protection violation. Nothing about it would be cured by the fact that other parents had been denied funding as well.”

After an hour of argument, several justices, including Kavanaugh, Alito, and Roberts, appeared to be troubled by Montana’s arguments while Sotomayor, Ginsburg, and Kagan seemed unsure about whether the parents had standing to bring the lawsuit in the first place.

The justices should issue their ruling in this case by the end of June when the 2019-2020 term wraps up.

This term is shaping up to be a significant one, and the court has already heard cases involving the Second Amendment, Obamacare, and whether federal law covers claims of discrimination based on gender identity and sexual orientation.

Later in the spring, the justices will take up cases looking at the president’s ability to fire the head of an “independent” agency, regulation of abortion providers, a dispute over a subpoena for Trump’s financial records, and the Little Sisters of the Poor, who are still seeking relief from the Obama-era contraceptive mandate.