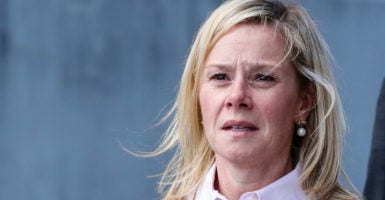 The Supreme Court returned Monday for oral arguments after a lengthy holiday break. During the court’s January sitting, the justices will hear arguments in eight cases, including ones dealing with school choice and the “Bridgegate” scandal.

The justices already have heard arguments in cases involving the Second Amendment, Obamacare, and whether federal law covers claims of discrimination based on gender identity and sexual orientation.

Later in the term, the court will take up cases involving the president’s ability to fire the head of an “independent” agency, regulation of abortion providers, and the dispute over a subpoena for President Donald Trump’s financial records.

Here are two key cases coming up in January.

In a scandal later known as “Bridgegate,” a four-day traffic jam turned out to be a plan concocted by aides to then-New Jersey Gov. Chris Christie to punish Fort Lee’s mayor for refusing to endorse Christie’s reelection bid.

Pursuant to a deal struck by the state and city decades ago, the Port Authority of New York and New Jersey designated three of the 12 inbound lanes as “special access lanes” for traffic coming from Fort Lee into Manhattan during the morning rush hour.

Beginning Sept. 9, 2013, the first day of the new school year, Port Authority police reduced the special access lanes to one. The resulting traffic jam created gridlock throughout Fort Lee for the next three days. Pleas from the mayor to the Port Authority went unanswered.

During a subsequent investigation into Bridgegate, the governor’s aides claimed the lane changes were part of a traffic study. But an email from deputy chief of staff Bridget Anne Kelly made the plan clear: It was “[t]ime for some traffic problems in Fort Lee.”

Kelly and Bill Baroni, deputy executive director of the Port Authority, were both fired and later convicted of seven federal crimes.

On appeal, the U.S. Court of Appeals for the 3rd Circuit affirmed their convictions for wire fraud and defrauding a federally funded program, finding that Kelly and Baroni deprived the Port Authority of its property by concealing their real reason (political retribution) for an otherwise permissible act.

The issue before the Supreme Court is whether Kelly and Baroni defrauded the government of property by claiming a public policy reason supported an official decision when that was not the real reason for the decision.

They admit their actions were “petty, insensitive, and ill-advised,” but argue that “political abuses of power are addressed politically.” They contend that hiding the political motives for an otherwise permissible act did not deprive the Port Authority of its property.

Kelly and Baroni encourage the Supreme Court not to criminalize political “spin” and instead follow the line of past cases in which the justices have “rebuffed efforts to use criminal fraud laws to police the ethical duty of public officials.”

In 2015, the Montana Legislature created a tax credit scholarship program that would provide scholarships for income-eligible students to use at qualified private schools.

Initially, recipients could use scholarship funds at qualified religiously affiliated schools. However, the Montana Department of Revenue implemented an administrative rule excluding religious schools, citing a provision in the state constitution that bars state funds from aiding religious organizations.

Parents who relied on the scholarship funds to send their kids to religious schools filed a lawsuit in state court challenging the administrative rule. They argued that the rule violates the Religion Clauses of the U.S. Constitution as well as the 14th Amendment’s Equal Protection Clause.

The parents maintain that the tax credit program did not violate the state constitution’s “no aid” provision since the tax credit merely incentivized private donations. The district court ruled in favor of the parents, but the Montana Supreme Court reversed and invalidated the scholarship program in its entirety.

Now the parents have asked the U.S. Supreme Court to extend the logic of Trinity Lutheran Church v. Comer, a 2017 ruling, to the school choice area.

In Trinity Lutheran, the Supreme Court ruled that Missouri violated the Free Exercise Clause when it barred a church-run day care center from receiving a public grant to resurface its playground. The justices reasoned that Missouri had improperly singled out the day care center for unfavorable treatment and denied it a public benefit solely because of its religious affiliation.

Montana, on the other hand, points to Locke v. Davey (2004), in which the Supreme Court held that, consistent with the Establishment Clause, states could prohibit the use of public scholarship funds for college students studying to become ministers.

The Montana case offers the Supreme Court the chance to harmonize these two prior rulings and provide guidance to the many states that have tax credit scholarships.

Expect the high court’s decisions in these two important cases, and many others, by the end of June.

>>> Listen to “SCOTUS 101,” a podcast with Elizabeth Slattery and friends that brings you up to speed on what’s happening at the Supreme Court.