Religious Liberty Scores a Win at the Supreme Court 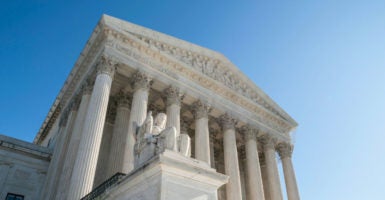 In a big win for religious liberty, the Supreme Court ruled on Monday in favor of Trinity Lutheran Church’s case against the state of Missouri. The case involved discrimination by the state in giving out publicly funded grants.

In an opinion by Chief Justice John Roberts, seven members of the court agreed that Missouri had violated the Constitution’s Free Exercise Clause.

Missouri has a grant program to offset the cost of resurfacing playgrounds with rubber surfaces made from recycled tires. This helps the state reduce the number of tires in its landfills and make playgrounds safer for kids.

Trinity Lutheran Church applied for such a grant to resurface its preschool playground. Though its application met all the neutral criteria and was rated highly, Missouri denied that application solely because it came from a church.

The state claimed that its constitution required it to reject the church’s request because of a “no aid” provision that prevents public money from going to churches.

The state also claimed it was trying to avoid violating the Establishment Clause, which today prohibits states from recognizing an official state church.

Trinity Lutheran Church argued that using state funds to ensure its playground is safe for kids is a completely secular purpose and the state’s actions demonstrate a hostility toward religion.

In its ruling, the court recognized that churches do not have to give up their religious identity in order to compete with secular organizations for state funds.

Missouri had excluded Trinity Lutheran from its grant program, and the court has repeatedly ruled against laws that require people to “choose between their religious beliefs and receiving a government benefit.”

The state singled out Trinity Lutheran for disfavored treatment because of its religious identity, so the court applied the “most exacting scrutiny” to find the state violated Trinity Lutheran’s free exercise.

Evaluating the state’s Establishment Clause concerns, the court wrote, “In the face of clear infringement on free exercise … that interest cannot qualify as compelling.”

While there is some “play in the joints” between the two religion clauses, “denying a qualified religious entity a public benefit because of its religious character … goes too far.”

Justice Neil Gorsuch concurred, explaining that the decision should not be read narrowly to apply only to cases involving playgrounds or children’s health and safety. Indeed, he concluded, “the general principles here do not permit discrimination against religious exercise—whether on the playground or anywhere else.”

In their view, allowing a church to apply for a grant like Missouri’s scrap tires program violates the Establishment Clause because “[w]hen a government funds a house of worship, it underwrites this religious exercise.”

But in fact, that famous phrase is not part of the Constitution, and certainly would not allow states to “impose special disabilities on the basis of … religious status.”

The so-called “wall of separation” comes from President Thomas Jefferson’s letter to the Danbury Baptist Association, but it’s worth pointing out that Jefferson approved of using federal funds to build churches.

This dissent highlights the fact that some people (and at least two justices) believe religious believers need to stay out of the public square and effectively check their beliefs at the door before entering the secular world.

Thankfully, the Constitution protects the freedom to believe what you want and live out those beliefs, and on Monday, religious freedom prevailed at the Supreme Court.