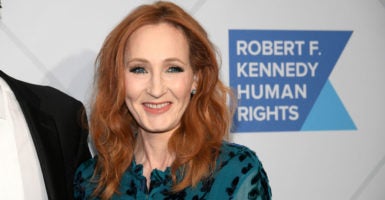 The fact that The Denver Post fired a columnist just weeks after writer J.K. Rowling, pictured in December, ignited a public outcry for defending Maya Forstater, the British woman who lost her job for saying that “sex is real,” is concerning. (Photo: Dia Dipasupil/Getty Images)

Weeks after J.K. Rowling expressed disdain for a British employer firing an employee for stating sex is binary, another employer—this time in the U.S.—allegedly fired a freelance columnist for saying there are only two sexes.

Jon Caldara, a regular columnist for The Denver Post, announced Jan. 17 in a Facebook post that the publication had fired him for his traditional, but apparently offensive and “insensitive,” beliefs about sex and gender.

An editor’s note posted Jan.21 at The Denver Post confirmed Megan Schrader, editor of The Denver Post’s editorial pages, decided the publication no longer would run Caldara’s weekly freelance column, although the newspaper denied Caldara’s views on gender were the reason.

In Caldara’s controversial piece, headlined “Colorado Dems should let sun shine on their hospital fees and sex-ed curriculum,” he suggested Democrats don’t want transparency in health care any more than they do in education, particularly when it comes to the transgender agenda regarding language. Part of his column reads:

Democrats don’t want transparency in hospital billing, and they certainly don’t want education transparency when it comes to their mandate to convince your kid that there are more than two sexes, even if it’s against your wishes.

Among the most controversial laws that passed last year was the comprehensive human sexuality education mandate which ripped local control away from your neighborhood school board. Now if your school district wants to teach even basic sex-ed, the teacher must also teach the “health needs” of LGBT individuals.

And in the anti-free-speech style that the left now embraces, the new law bans discussions that “employ gender stereotypes,” or any language the state’s new oversight board of LGBT activists consider “stigmatizing.” In case you hadn’t noticed, just about everything is stigmatizing to the easily triggered, perpetually offended.

In his Facebook post, Caldara clarifies his column is not meant to be diplomatic. It’s “not a soft voiced, sticky sweet NPR-styled piece which employs the language now mandated by the victim-centric, identity politics-driven media,” he wrote. He further explained why he believed The Denver Post fired him:

What seemed to be the last straw for my column was my insistence that there are only two sexes and my frustration that to be inclusive of the transgendered (even that word isn’t allowed) we must lose our right to free speech.

In its editor’s note about why the company let Caldara go, the paper dismissed implications that he was fired because editors “do not want to run conservative columns about issues surrounding sex and gender,” citing that they had run two of his columns on that topic previously.

Instead, they talked of this being a “sensitive” subject that requires “respectful language.” “We expect writers to work with us in a collaborative and professional manner as we strive toward that goal,” the post read.

Caldara’s style may be straightforward rather than subtle, but it’s hard to see how he was disrespectful, callous, or cruel. In fact, it’s almost ironic that the paper would imply Caldara’s language was too harsh when manipulation of language is exactly the point Caldara was making in his column.

Caldara emphasized progressives not only have weaponized language in a way that’s well beyond what society has deemed normal for centuries, but they also now want to force the rest of society to use language the same way. In essence, participate or be shunned, ostracized, or labeled traditional or mean.

For his bold language about the importance of free language, Caldara was fired for using the “wrong” language.

The fact that The Denver Post fired Caldara just weeks after Rowling ignited a public outcry for defending Maya Forstater, the British woman who lost her job for saying that “sex is real,” seems incidental at best and foreboding at worst: If Forstater was the canary in the coal mine for the transgender speech police, what might Caldara be?

Even more disconcerting, Caldara’s own political views are hardly conservative: In his Facebook post he says he’s not even socially conservative.

To be clear I am strongly pro-gay marriage, which has frustrated many of my socially conservative friends. I have friends, family, and employees from the LGBT community. I don’t care who uses whose bathroom, what you wear, or how you identify. People from this community have rights which we must protect.

Caldara’s personal beliefs coupled with his persuasive column about the importance of language autonomy make the fact that he got fired more alarming. His points weren’t rooted in personal bias; they were urging progressives to loosen their manipulative grip on language.

For the last couple years, the progressive transgender community has maintained that although there are two sexes, male and female, gender is fluid. If Caldara can’t say that, and advocate for free speech in a freelance column without getting fired for it, then his point about succumbing to the speech police is all the more salient.