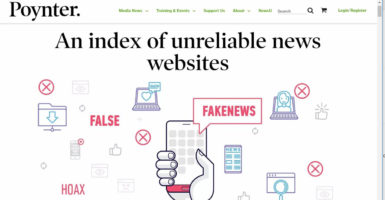 The Poynter Institute for Media Studies, which describes itself as a group that “champions freedom of expression, civil dialogue and compelling journalism that helps citizens participate in healthy democracies,” has put The Daily Signal on its list of “unreliable news websites,” saying that we are guilty of bias. (Photo: Screenshot via Poynter website)

Update: Poynter announced late Thursday night it was taking down the list of unreliable news sites. “We began an audit to test the accuracy and veracity of the list, and while we feel that many of the sites did have a track record of publishing unreliable information, our review found weaknesses in the methodology,” writes Poynter’s managing editor, Barbara Allen, adding: “We regret that we failed to ensure that the data was rigorous before publication, and apologize for the confusion and agitation caused by its publication.”

Here at The Daily Signal, we’re not surprised we have haters.

After all, every day we’re telling the stories the mainstream media doesn’t want Americans to know about.

We’re sharing the story of a Border Patrol agent whose own dad came here illegally and yet still believes it’s important to keep the border secure. We’re reporting on abortion survivors, whose amazing tales belie the left’s lies that babies don’t need guaranteed medical treatment after they survive. We’re telling the incredible tale of a man who went from transgender to nonbinary to identifying as a man again—a story whose conclusion the mainstream media wouldn’t touch, despite covering his earlier transitions.

And that’s just a handful of the stories we’ve told over our five-year history.

But here’s the crazy thing: We think our haters should be honest.

If you don’t like The Daily Signal because you don’t believe in free speech or you think conservatives should be silent or you just don’t want certain stories told or it makes you upset that we call unborn babies “babies” instead of “fetuses,” fine. It’s a free country.

And that’s what just happened.

The Poynter Institute for Media Studies, which describes itself as a group that “champions freedom of expression, civil dialogue and compelling journalism that helps citizens participate in healthy democracies,” has put The Daily Signal on its list of “unreliable news websites,” saying that we are guilty of bias.

What does that mean? Well, frankly, it’s a little hard to know because the site Poynter Institute is relying on for this citation—OpenSources—is a blank web page, according to the link Poynter provided on its list. (So much for transparency!)

According to Poynter, OpenSources lists us as “Extreme Bias: Sources that come from a particular point of view and may rely on propaganda, decontextualized information, and opinions distorted as facts.”

But given that the linked website for OpenSources is blank (without even contact information) and Poynter, as far as I can tell, never reached out to The Daily Signal to give us a chance to respond to what they perceived as specific instances of bias, it’s hard to know where to begin to defend ourselves.

It’s also impossible to discern what exactly they mean by “bias” since they explicitly said ThinkProgress (the news website that is an arm of the far-left Center for American Progress Action Fund) and The Intercept (which recently did a big video project that allowed Rep. Alexandria Ocasio-Cortez, D-N.Y.,  simply to recite her talking points about the Green New Deal for over seven minutes) are reliable sources of news.

Also not on the list? MSNBC, Mother Jones, The Nation, and The Guardian, all news outlets well known for their liberal perspective.

Perhaps not surprisingly, given that bias, the list was compiled by Barrett Golding, who The Washington Free Beacon reports is an employee of the Southern Poverty Law Center. And the Southern Poverty Law Center, of course, infamously groups socially conservative groups such as the Family Research Council with hate groups such as the Ku Klux Klan on its lists of “hate groups.”

So let’s do something novel and talk about some facts.

First, The Daily Signal has a green rating from NewsGuard, an organization run by journalists that analyzes news sites’ content and rates them accordingly. The Daily Signal, according to NewsGuard, adheres to “NewsGuard’s standards of credibility and transparency.” That rating is the same rating that major mainstream media outlets such as CNN, The New York Times, and The Wall Street Journal have.

We deserve that rating—because we do adhere to journalism standards.

We correct our mistakes—transparently and publicly in notes attached to the articles.

And we do our absolute best to contact any person or organization named in a story who deserves a chance to confirm or deny or respond.

Just this week, our reporter Kevin Mooney relentlessly contacted a series of unions to make sure that they knew they could make a comment and respond to allegations in his article about two teachers’ legal fight against the unions, as you can see from this section of his story:

The National Education Association did not respond to requests for comment.

The Daily Signal also sought comment on the lawsuit and specific allegations from two local unions, the Fremont Unified District Teachers Association and the Hayward Education Association, by phone and email.

Hayward union officials referred a reporter to the state union, while the Fremont local acknowledged the request for comment and said it would be forwarded to the local’s president.

The Daily Signal also asked the California Teachers Association’s Wells whether he would like to respond on behalf of the local unions. He had not commented further at publication time.

That’s the kind of journalism we do every day—because we believe in being fair. We want everyone, no matter their political beliefs or their views on conservative journalism, to have a chance to respond before we publish.

And we have a long history of doing that. In fact, just last year, we ended up publishing an exclusive op-ed from a top Hillary Clinton aide, Philippe Reines, just because we had reached out to him to see if Clinton’s camp wanted to respond to allegations made against it in a new book from a New York Times reporter. (And yes, we reached out to The New York Times reporter as well for comment.)

In fact, I followed our own principles in doing this and reached out to Poynter. Baybars Orsek, director of Poynter’s International Fact-Checking Network, responded and did not contest our assertion that we had never been contacted by Poynter prior to publication of this list.

Nor did Orsek provide a working link to OpenSources, but did note we could find its archive here. His response in an email about why OpenSources was credible was extremely vague: “OpenSources is a credible index, and one of the very few, if not the only major efforts to document unreliable news sites, and reported to be used dozens of times by researchers in different studies.”

Asked why many well-known conservative sites seemingly were targeted but liberal ones weren’t, Orsek writes: “As also stated in the article, a handful of outlets, known with their conservative audiences are not on the list and there hadn’t been any debates to exclude any liberal ones from the database.”

I’m not really sure what that means, but the data speaks for itself: While Poynter did say National Review and The Weekly Standard (now defunct) and Heritage.org (bizarrely, as Heritage.org isn’t a news site) were fine, my review of the list shows significantly more big-name conservative sites included than big-name liberal ones. Once again, the bias in journalism always seem to skew in the same direction.

Here’s the thing about The Daily Signal: We’re old-fashioned when it comes to journalism. At the end of the day, we think it should be about the truth.

Yes, we are part of The Heritage Foundation (a tie we always have been transparent about) and we come from a conservative perspective. But we go to great trouble to be transparent and clear, including labeling all our stories as news, analysis, commentary, or feature, to make sure no one mistakes an op-ed for a news story.

If Poynter had bothered to contact us, we could have shared all this with them.

Unfortunately, with this list, the once revered journalism institute has shown itself willing to be just another member of the activist left. Instead of making a good-faith effort to distinguish true fake news sites from fair and accurate news sites across the ideological spectrum, Poynter decided simply to label a bunch of conservative news sites as fake news (and yet somehow, so very strangely, managed not to smear any big liberal news site in the same way).

What’s more, Poynter made it clear it wasn’t just here to provide information, but to encourage boycotts and blacklisting of us and other conservative sites. “We hope that the index will be useful for advertisers that want to stop funding misinformation,” writes the list’s author, Golding.

This is a real shame.

American journalism is in crisis right now. Media outlet after media outlet relentlessly pursued and promoted the Trump-Russia collusion narrative, with significant reliance on anonymous sources, only to discover that ultimately their own self-appointed hero, Robert Mueller, found no collusion.

In January, an insignificant moment between a Native American activist and a high school boy blew up, thanks to the media, in a way that, had his parents not fought back with legal threats, could have destroyed the boy’s life.

Even once truly objective outlets such as the Associated Press are falling prey to political correctness and prioritizing being woke over being accurate, saying journalists shouldn’t use terms like “illegal immigrants.” When it comes to climate change, the Associated Press places itself firmly on the left, declaring in its style guide: “To describe those who don’t accept climate science or dispute that the world is warming from man-made forces, use climate change doubters or those who reject mainstream climate science. Avoid use of skeptics or deniers.”

In other words, if an organization really wanted to make a good-faith effort to hold journalists accountable, there’s ample opportunity.

Unfortunately, with its new list, Poynter showed that censuring and ostracizing conservative news sites, not standing up for the truth, is its real goal.

Poynter’s Orsek emails, “We are taking all evaluation requests seriously.” We’re hoping that means that smearing conservative new sites is a temporary misstep for Poynter, not a permanent change from journalism organization to liberal activist group.